Truckers get time in spotlight

Companies recognize drivers with week of festivities by Robbie Neiswanger | September 21, 2015 at 2:15 a.m. 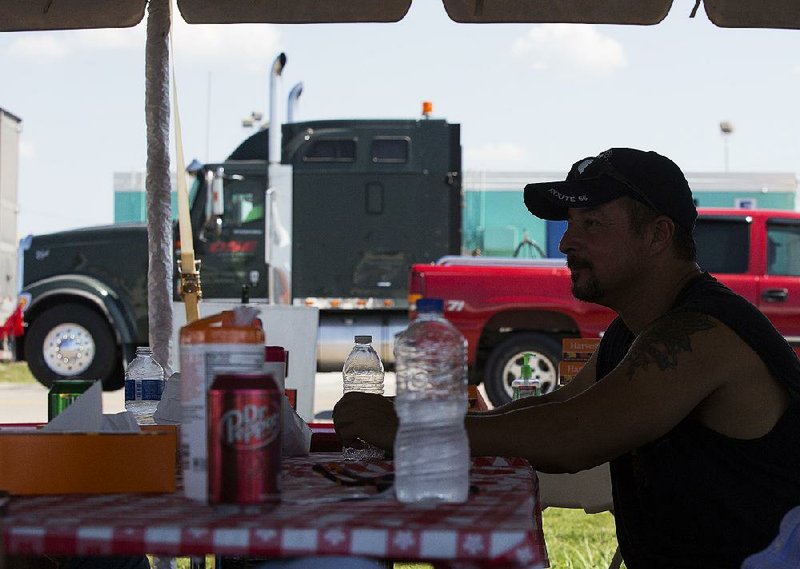 Bret Frenzel of Chicago eats a free lunch Thursday at the Petro Station in North Little Rock. Frenzel and other truckers were treated to a free meal and some games and music by the Arkansas Trucking Association.

Craig Harper, J.B. Hunt's chief operations officer, said about 2,500 people attended the event held at Shady Lake Amusement Park, which refers to itself as the area's "complete group picnic location." Drivers and their families rode bumper cars, steered paddle boats, played volleyball and were treated to a picnic as their role in the Fortune 500 company's success was celebrated.

"You hear the phrase over and over, but they truly are the backbone of the company," said Harper, who estimated J.B. Hunt has about 15,000 drivers in its workforce.

J.B. Hunt, along with transportation companies across the nation, emphasized the importance of the group as the trucking industry participated in Driver Appreciation Week. The event was created in 1988 as an annual avenue for companies to say thank you to drivers and publicize a workforce often taken for granted through what Harper described as "tough work."

There are 3.4 million professional truck drivers in the country, according to figures from the American Trucking Associations. The group logs more than 169 billion miles each year and is responsible for delivering 68.8 percent of the nation's freight tonnage, working through mounting regulatory pressures, crumbling infrastructure and lengthy delays.

"We know what a challenging job driving a truck can be, but we also know that trucks move America forward and without each of you we just simply couldn't get that job done," Bill Graves, president of the American Trucking Associations, said in a video message to drivers last week.

The Arkansas Trucking Association and Arkansas-based companies held events during the week geared toward expressing their appreciation for drivers, including cookouts, ceremonies and gift giveaways. It included an association-sponsored event at a truck stop in North Little Rock, where drivers were treated to lunch and a concert by country singer Lindsay Lawler on Thursday.

Shannon Newton, president of the Arkansas Trucking Association, said in a statement that the week is aimed toward reminding the public of "truck drivers' enormous impact on our way of life" and expressing "gratitude for their commitment to this demanding profession." She helped USA Truck kick off the festivities with a ceremony honoring four drivers at its Van Buren headquarters.

USA Truck drivers who also are military veterans were honored for their service to the company and the country during a Sept. 11 ceremony. The four, who were selected based on their tenure and safety record, were each given the keys to military-themed tractors, which included a dog tag decal bearing the driver's name and branch of service.

David Bell, one of the drivers honored, said he couldn't believe the gift after accepting his keys to his new company truck. Tom Glaser, USA Truck's chief executive officer, said it was deserved.

"I think drivers today are being more appreciated by the companies, and they're feeling that," Glaser said. "Having cookouts and getting free handouts from all the vendors, that's nice. But I think the important thing is when the public is made aware of what these guys do. If trucks stopped moving, inside of 30 days grocery store shelves would be empty. Inside of 60 days you wouldn't have any gas in your car. Inside of 90 days people would be doing stupid stuff."

USA Truck provided lunch for drivers at each of its eight terminals throughout the week, which were supplied and catered by company vendors. It was a similar scene at P.A.M. Transportation Services Inc., which had lunches and prize giveaways for drivers at its six terminals to say thanks.

"Our drivers know we appreciate them," said Clark Gray, P.A.M.'s vice president of driver resources and compliance. "But it's also nice to have a formalized week where we say, 'This is your week.' To have a week set aside where we can schedule these activities as an industry is nice."

One of P.A.M.'s vendors -- Freightliner -- catered Wednesday's meal at the company's headquarters in Tontitown, cooking hamburgers on an enormous Razorback grill.

The outdoor picnic was attended by drivers, trainees and P.A.M. employees, giving each the chance to mingle while they ate lunch. The company held a raffle for drivers, while gift cards, dining cards, shirts and mugs were available for each to take with them.

"I appreciate that they take the time to do this for us," said Alex Shkurat, who has been a P.A.M. driver for 11 months. "Because the drivers make this country move."

The week-long recognition comes amid a long-standing shortage, which continues to impact an industry struggling to find enough drivers to fulfill the growing number of freight demands.

Trucking companies constantly evaluate ways to attract drivers to the industry and retain them. Pay increases, routes that offer more home time and other perks like equipment upgrades and facility improvements are all tools used in an effort to boost the driving force.

Harper also said companies like J.B. Hunt work with customers to lessen other challenges like lengthy wait times at shipping and receiving locations. J.B. Hunt recently published a white paper on the subject, outlining ways to curb the waste from the supply chain.

"I do quite a few ride-alongs and I act all tough and do it for two days or five days," Harper said. "But doing it day in and day out, it's a tough job. That's why we need to make every other touch point we have with the driver the best it can be. There's enough things that are not in our control."

Harper believes respect for the driving force can go a long way, which is why J.B. Hunt and other companies poured their efforts into driver appreciation programs. Harper said J.B. Hunt has even turned September into an unofficial "Driver Appreciation Month" with more than 300 events scheduled.

Every company driver is receiving a hand-written letter from a J.B. Hunt employee, thanking them for their work. Later this month there will be a ribbon-cutting ceremony for a remodeled driver facility in South Gate, Calif., which is one of six the company has scheduled for improvements.

The letters, facility improvements, cookouts and amusement park trip are all pieces of J.B. Hunt's plans to show its gratitude. But Harper also stressed the appreciation for a trucking company's valuable commodity -- its driving force -- shouldn't wane when the formal week of appreciation ends.

"One day, one week, one month is not enough," Harper said. "We need to be working daily to show the appreciation for the drivers and the work they do."