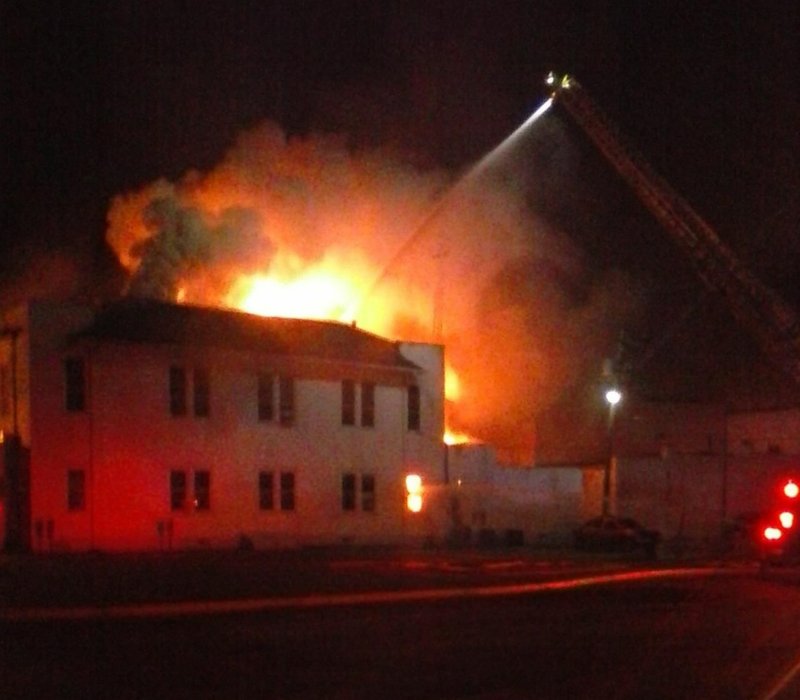 Flames shoot from the top of the Arkansas County annex courthouse the morning of Sept. 23, 2014.

A Stuttgart man's need for another hit of methamphetamine will cost him $2.2 million and at least seven years in federal prison.

But, as U.S. District Judge Leon Holmes told 34-year-old Donald Aaron on Monday, his sentence on a federal arson charge could be worse. If a presentence report uncovers something unanticipated, he could still face a sentence of up to 40 years in prison and a $250,000 fine on top of restitution for a fire that burned a courthouse annex.

And if Aaron had gone to trial, as he was scheduled to Monday, a federal jury could have convicted him of both counts he was facing, rather than just the one he pleaded guilty to at the last minute. That would have created the potential for more prison time and a bigger fine.

Aaron was indicted in February on two federal arson charges stemming from a fire that broke out early Sept. 24, 2014, on the first floor of the two-story Arkansas County Courthouse annex in Stuttgart and quickly spread throughout the two-story building, constructed in 1981.

By the time firefighters arrived just after 3 a.m., the structure had already begun to collapse, preventing them from going inside. By dawn, the courthouse annex had been reduced to a smoldering shambles.

After authorities ruled out their initial suspicion that it was an electrical fire, they considered the work of the agencies that had been housed in the annex since 1992, and wondered whether someone had deliberately targeted one of them. The annex included space for the sheriff's office, the Arkansas State Police, the county's 911 coordinator, the Office of Emergency Management, the county assessor, the tax collector and the county judge.

The federal Bureau of Alcohol, Tobacco, Firearms and Explosives was called, and agents immediately set to work trying to figure out what sort of "message" was being delivered, if any.

Meanwhile, a backhoe knocked down the remaining walls of the annex because of concerns they would collapse. A city employee operating an excavator was injured and treated at a hospital when the heavy piece of equipment fell into a crawlspace.

The Stuttgart Police Department temporarily took over the county's 911 calls, and other offices' phones were forwarded to mobile phones or a main line in the nearby circuit courthouse.

Sonny Cox, the county judge at the time, said the fire wasn't a "total disaster for county government" because Arkansas County has two seats, in Stuttgart and DeWitt, and vital records were stored on backup disks at the DeWitt courthouse.

About two weeks after the fire, ATF agents determined it was the result of arson.

Thanks to footage from security cameras on other buildings in downtown Stuttgart that showed a man walking in the area, particularly near a broken first-floor window of the annex shortly before the fire broke out, authorities said they eventually traced the fire to Aaron.

Aaron's guilty plea Monday was to the first charge, in exchange for prosecutors dismissing the second charge and agreeing to recommend a seven-year sentence.

When asked to explain in his own words what happened, Aaron, standing next to defense attorney Latrece Gray of the federal public defender's office, took a deep breath.

Then, he said, "I'd been smoking meth for six to eight hours. I was almost out of dope. I busted a window to get into the evidence room, but I could not get in."

Aaron said that's when he pulled a piece of foil out of his pocket, set a "big rock" of the drug on it, and lighted it.

"It flamed up on me, burned me," he told the judge. "I throwed it down, and I jumped out the window and ran away."

Assistant U.S. Attorney Chris Givens told Holmes that the plea agreement was partially based on the fact that Aaron's actions created a substantial risk of injury, constituting a "willful disregard" for the safety of others.

County officials don't know when the construction of a new courthouse annex will be completed.

Although Aaron will be ordered to pay $2.2 million in restitution, the new building is expected to cost about $1.6 million to construct, with insurance money covering most of it. The 10,000-square-foot, two-story structure is being built on the old structure's footprint and will be similar in size.