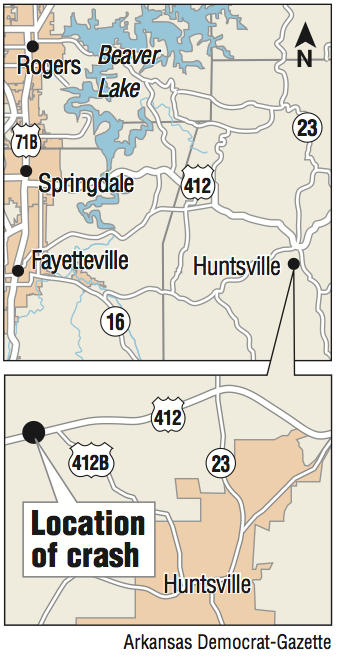 A map showing Huntsville and the location of the crash there.

A 15-year-old Huntsville High School student died Monday when the sport utility vehicle in which she was riding crashed into the back of a stopped Huntsville school bus on U.S. 412 in Madison County.

The accident occurred at 7:16 a.m. Monday as both vehicles were heading east on a clear day. King said bright sunlight could have been a factor in the crash.

According to a crash summary on the state police website, the 2006 International school bus came to a complete stop in the outside lane of the four-lane highway as the driver waited for students to board.

The 2002 GMC sport utility vehicle then struck the bus in the rear.

King said the SUV left no skid marks on the pavement, indicating the driver didn't hit the brakes before the accident. King said he didn't know how fast the SUV was traveling at the time of the impact.

A boy who was riding in the back seat of the SUV wasn't injured, King said. Because everyone in the SUV was a minor, police did not release any names, he said.

The Huntsville High School's Family, Career and Community Leaders of America group posted on its Facebook page, "Please wear black and gold in honor of Shelby Dotson tomorrow, and please remain praying for her friends and family, as well as the family of Taylor Crumley."

King said that under some conditions, drivers under the age of 16 can get a "hardship" license to drive without an adult in the car.

"I don't know what kind of license she had," King said late Monday. "This is still under investigation."

According to the Arkansas Department of Finance and Administration, "age waivers, or hardships, are issued for minors between the ages of 14-16 for the specific purposes of getting to and from school or school activities, to and from work, or for medical reasons."

King said there was video of the crash, taken from a camera on the bus.

The driver of the bus was Amanda Evans, 43, of Huntsville, according to the police report.

"Out of respect for the families, we are unable to comment at this time," Chris Davis, assistant principal at Huntsville High School, said via email late Monday afternoon.

All students on the bus were transported to the high school gym where they were examined by school nurses as a precautionary measure.

Huntsville High School set up a crisis response team on Monday and suspended school activities, but classes continued as usual throughout the day, according to a second Facebook post.