Migrants wait to be escorted to a train after crossing the Hungarian border from Croatia near the village of Zakany, Hungary. Hungarian Prime Minister Viktor Orban has worked to stymie the influx of mostly Muslim asylum seekers, saying they are on a campaign to de-Christianize Europe.

BRUSSELS -- European leaders moved Wednesday toward renewed unity over the continent's migrant crisis despite bitter divisions over how to cope with the crush of people seeking asylum. 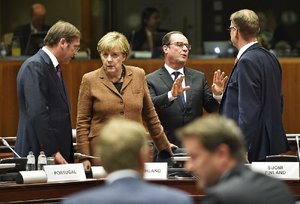 At an emergency meeting in Brussels called by European Union President Donald Tusk, EU leaders managed to agree early today to boost border controls to ease the influx and to send about $1.1 billion to international agencies helping refugees at camps near their home countries.

The leaders also said task forces of European experts sent to help register and screen migrants in "hot spots" must be fully operational in Greece and Italy, and perhaps also Bulgaria, by November.

The move is intended to quickly identify migrants eligible for refugee status and relocation into other European countries, and to filter out migrants who are seeking better economic opportunities and who are unlikely to qualify for asylum in Europe.

"The measures we have agreed [to] today will not end the crisis. But they are all necessary steps in the right direction," Tusk said at the conclusion of seven hours of meeting with the bloc's leaders.

He added that European leaders, who have disagreed acrimoniously with one another over how best to tackle the flow of people into the continent, finally appeared to reach agreement.

"Tonight we have a common understanding that we cannot continue like we did before," he said, adding that the crisis will only deepen.

"It is clear that the greatest tide of refugees and migrants is yet to come," he said. "Therefore we need to correct the policy of open doors and windows."

The leaders also pledged to boost support to Lebanon, Turkey and Jordan to help them cope with the millions fleeing the fighting in Syria.

"The more money we give to address the root causes that are driving people to leave, the less likely they will be to leave their homes," German Chancellor Angela Merkel said.

About half a million people have fled to Europe so far this year in search of sanctuary or jobs. As numbers swell, nations have tightened border security. Hungary has put up a razor-wire fence along its border with Serbia and is close to completing a similar fence separating it from fellow EU member Croatia.

As the session began Wednesday evening, Tusk urged divided EU nations to set aside their differences and work together to hammer out a concrete plan "in place of the arguments and the chaos we have witnessed in the last weeks."

"Those who don't share our values, those who don't even want to respect those principles, need to start asking themselves questions about their place in the European Union," he said on his way into the meeting.

The conclave came a day after EU interior ministers pushed through a plan -- over the objections of four central European nations -- to spread 120,000 asylum seekers across Europe.

"The decision to relocate 160,000 people from the most affected member states is a historic first and a genuine, laudable expression of European solidarity," European Commission President Jean-Claude Juncker said Wednesday. "It cannot be the end of the story, however. It is time for further, bold, determined and concerted action by the European Union, by its institutions and by all its member states."

One opponent, Slovakia, warned that it would reject the EU resettlement decision and threatened to oppose it in court.

"We will go in two directions: First one, we will file a charge at the court in Luxembourg ... secondly, we will not implement the [decision] of the interior ministers," Slovak Prime Minister Robert Fico told reporters before leaving for the summit in Brussels. "We won't implement this decision because we think it can't work."

Leaders of the four countries that voted against the migrants measure -- Hungary, Romania, the Czech Republic and Slovakia -- have all condemned the effort as a grave violation of their independence in a bloc that usually prides itself on consensus. European officials said the vote was binding on all countries, including those that voted against it.

The decision to override the dissenters means the EU will be sending thousands of people into nations that do not want them, raising questions about the future of the bloc and the well-being of the asylum seekers consigned to those countries.

It was yet another sign of the challenges facing the 28-nation bloc that is handling the largest movement of people on the continent since World War II.

After Tuesday's vote, it was unclear how much common ground remained among the leaders.

Central European leaders condemned the vote, warning that Europe would suffer as a result of the plan to force them to accept asylum seekers.

"Very soon we will see that the emperor has no clothes," Czech Interior Minister Milan Chovanec said on Twitter. "Common sense lost today."

In Hungary, Prime Minister Viktor Orban has crusaded against the mostly Muslim asylum seekers, saying they are on a campaign to de-Christianize Europe. He has built a more-than-100-mile, razor-tipped fence to keep them away from his country's frontier with Serbia and in recent days has started to expand the fence to the borders with Romania and Croatia.

Proponents of the EU plan acknowledged that it was just a first step to address the much bigger crisis. According to the United Nations refugee agency, more than 477,000 people have arrived in Europe so far this year via often-dangerous sea crossings, and 6,000 now land on Europe's shores every day -- up sharply from August, when the figure stood at 4,200 per day.

Many of the migrants are arriving via risky boat crossings from Turkey to the Greek islands.

"If the Greeks are not able to defend their own borders, we should ask kindly -- because Greece is a sovereign country -- to let other countries of the European Union defend the Greek borders," Orban said.

For its part, Turkey has begun enforcing long-dormant rules on Syrians' travel, in part over concerns about how the flow is affecting the country's image, according to a government document and interviews with officials and migrants.

The one-page Interior Ministry document, dated Aug. 29, says officials consider that "Syrians who are trying to go to third countries through our country illegally are posing a threat to public order and public security, and are negatively affecting our country's image internationally."

It orders checks on Syrians' documents at the entrances and exits to each province, and asks law enforcement officials to tell transport companies that Syrians are not allowed to leave the provinces where they have registered unless they get permission. The document refers only to Syrians, who constitute the overwhelming majority of Turkey's roughly 2 million migrants.

That number far outstrips the number of migrants in all neighboring European countries put together and has turned the country into the world's No. 1 host of refugees overall.

Information for this article was contributed by Michael Birnbaum of The Washington Post; and by of Mike Corder, Lorne Cook, John-Thor Dahlburg, Karel Janicek, Berza Simsek and Raphael Satter of The Associated Press.