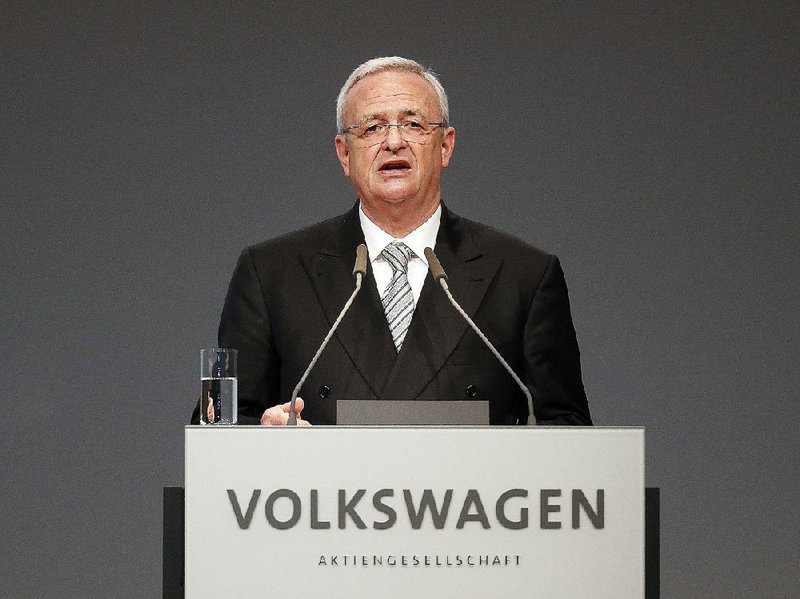 NEW YORK -- Former Volkswagen AG chief executive Martin Winterkorn amassed a $32 million pension before stepping down Wednesday, and depending on how the supervisor board classifies his exit, he stands to reap millions more in severance.

Winterkorn disclosed Wednesday that he had asked the board to terminate his employment, after Volkswagen diesel vehicles were found to circumvent U.S. emissions standards.

Company spokesman Claus-Peter Tiemann declined to comment on how much money the departing CEO stands to get. Volkswagen's most recent annual report outlines how Winterkorn, its leader since 2007, could theoretically collect two significant payouts.

Winterkorn's pension had a value of $32 million at the end of last year, according to the report, which doesn't describe any conditions that would lead the company to withhold it. And under certain circumstances, he also can collect severance equal to two years of "remuneration." He was Germany's second-highest paid CEO last year, receiving a total of $18.7 million in compensation from the company and majority shareholder Porsche SE.

While the severance package kicks in if the supervisory board terminates his contract early, there's a caveat. If the board ends his employment for a reason for which he is responsible, then severance is forfeited, according to company filings.

The supervisory board's executive committee said in a statement Wednesday that Winterkorn "had no knowledge of the manipulation of emissions data," and that it respected his offer to resign. It also thanked him for his "towering contributions" to the company.

Winterkorn, 68, said in his statement Wednesday that he was stunned to learn of the scope of alleged misconduct occurring at the company. U.S. officials said Sept. 18 that the carmaker had cheated during tests of diesel-powered vehicles sold since 2009.

"As CEO I accept responsibility for the irregularities that have been found in diesel engines and have therefore requested the supervisory board to agree on terminating my function as CEO," he said. "I am doing this in the interests of the company even though I am not aware of any wrongdoing on my part."

The annual report also mentions another piece of his pension: He can use a company car in the years that benefit is being paid out.

The software in question in the United States was built into the automaker's cars in Europe as well, Germany said Thursday, though it isn't yet clear if the software helped cheat tests as it did in the U.S.

The EPA accused Volkswagen of installing the "defeat device" in 482,000 cars sold in the United States. Volkswagen later acknowledged that similar software exists in 11 million diesel cars worldwide and set aside $7.2 billion to cover the costs of trial, fines and recalls.

"We don't yet have figures for how many of these 11 million cars that are apparently affected are in Europe," Dobrindt said. "That will be cleared up in the next few days."

In neighboring France, Environment Minister Segolene Royal on Thursday announced random tests of about 100 French cars to ensure that their engines meet pollution standards in the wake of the Volkswagen emissions revelations.

And the European Union's executive commission called on national authorities "to look into the implications for vehicles sold in Europe and ensure that EU pollutant emission standards are scrupulously respected."

Olaf Lies, economy and transport minister of Volkswagen's home state Lower Saxony, which holds a 20 percent stake in the company, said the investigation into the scandal was just starting.

"There must be people responsible for allowing the manipulation of emission levels to happen," he said.

Japanese regulators have begun an inquiry into whether Volkswagen vehicles sold in that country comply with emissions standards.

The nation's transport ministry may inspect Volkswagen cars, depending on the company's response, said Mineo Ueki, an official within the policy division in charge of vehicle emissions inspections. Volkswagen will reconsider plans to introduce diesel models in Japan, according to spokesman Dorothea Gasztner.

Tennessee officials are trying to soothe fears about the potential impact on Volkswagen's Chattanooga factory, the center of the state's economic development efforts of the past decade.

"We have been assured by Volkswagen that they are not going anywhere and will continue to grow in Chattanooga," Republican Gov. Bill Haslam said through a spokesman. "But they have to address this issue."

Chattanooga was selected in 2008 as the site of Volkswagen's first U.S. plant in decades. It was part of a strategy endorsed by Winterkorn to increase North American sales. The plant produces the midsize Passat sedan.

The company has sought to enhance its American sales by building a new sport utility vehicle in Chattanooga that is scheduled to hit the market late next year.

The decision to expand the plant to build the new vehicle was helped by a state and local incentives package that could be worth up to $300 million.

Chattanooga Mayor Andy Berke said he has spoken with Volkswagen officials and said they told him plans at the plant are still on track.

"VW officials assured me they are taking this matter seriously and explained how critical the [new vehicle] is to their North American market strategy," Berke said in an email.

Information for this article was contributed by Anders Melin, Masatsugu Horie and Craig Trudell of Bloomberg News; and by Geir Moulson, Frank Jordans and Erik Schelzig of The Associated Press.