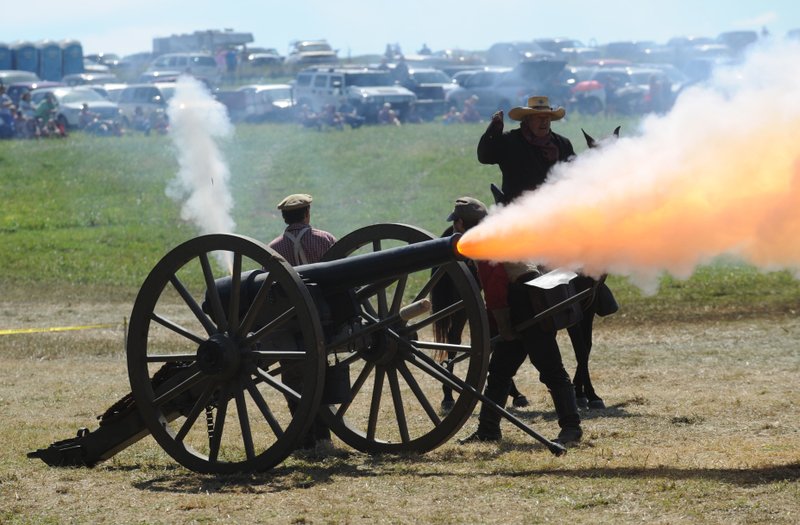 PEA RIDGE -- A bit of history was given life and breath Saturday as thousands of spectators watched a band of Civil War enthusiasts re-enact the lives, and sometimes deaths, of the soldiers who fought in 1862 at the Battle of Pea Ridge. 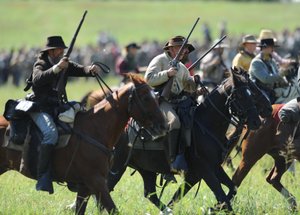 Photo by Andy Shupe
Members of the Confederate cavalry ride into battle Saturday during a re-enactment of the Civil War Battle of Pea Ridge in Pea Ridge. Visit nwadg.com/photos to see more photos from the weekend. 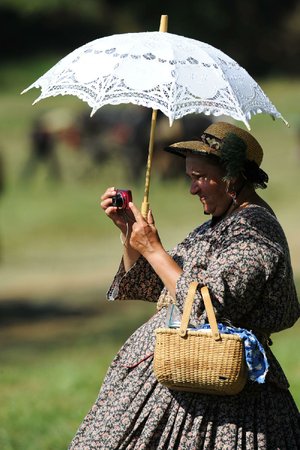 Photo by Andy Shupe
Ginger Johnson of Oak Grove, Mo., takes a photograph from the edge of the battlefield Saturday during a re-enactment of the Civil War Battle of Pea Ridge. 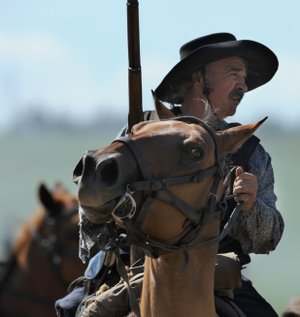 Photo by Andy Shupe
A member of the Confederate cavalry rides into battle Saturday during a re-enactment of the Civil War Battle of Pea Ridge in Pea Ridge. Visit nwadg.com/photos to see more photos from the weekend.

The Battle of Pea Ridge, March 7-8, 1862, played a pivotal role in securing Missouri for the Union and opened Arkansas to Union occupation. It played a large role in preserving Missouri’s tenuous loyal-state status. The battle was one of the bloodiest west of the Mississippi. The Confederates suffered about 2,000 casualties. The Union had 1,384 casualties.

Source: The Encyclopedia of Arkansas

The event, which continues today, is put on by the Arkansas Reenactors Educational Association, a nonprofit charity group. The proceeds go to historical preservation through organizations like the Pea Ridge National Military Park Foundation.

Bailey said much of his time is spent seeing to the basic needs of the re-enactors, with water being a prime necessity -- as it was for Civil War soldiers.

"Our biggest challenge right now is supplying the troops with water because of the heat and the high usage factor," he said.

The soldiers for the three-day event, which began Friday, came from many states to participate in the encampment and battles. Men and women in uniform carrying rifles or manning artillery pieces filled the encampments, joined by wives and daughters baking and cooking over campfires.

A row of sutlers' stores offered attendees a variety of 19th century wares, from period clothing and hats to photography and military uniforms and equipment. Blacksmiths and tinsmiths put their craftsmanship on display. Singers and musicians further enhanced the atmosphere with Civil War-era songs.

Kay Burton of Mountain View, with the Clearwater Hat Company, said she and her husband produce felt fur hats using the same techniques, and in some cases the same equipment, used before and after the Civil War.

"We have wooden blocks from as far back as the 1830s," she said. "Our blocking machine is one of only 20 in the country and dates back to the 1870s. Our brim trimmer is from the original Stetson Hat factory in 1865."

Burton, a former history teacher, said the company produces hats sold online and at events similar to the Pea Ridge re-enactment. The company also has filled orders for historically accurate hats used in several films and displayed in the Smithsonian Institution.

Jay Laughlin of Skiatook, Okla., a major with the 1st Arkansas Confederate States Light Artillery, said he has been involved in re-enactments for 22 or 23 years.

He described in detail how the armies in the Civil War used cannons and howitzers against approaching troops: beginning with exploding case shot fired above approaching troops at long range, then switching to solid shot when the armies moved closer, then switching to grape shot or canister, which effectively turned the weapons into enormous shotguns, at extreme close range.

Laughlin said Pea Ridge is recognized as one of the more important Civil War re-enactments.

"This is my third time to the event," he said. "This is really a good event. This is known as a 'maximum effort,' where I tell my men, 'bring everything you've got.'"

Laughlin said he's heard some negative feedback about such events after this year's deadly shootings at a historically black church in Charleston, S.C., and the subsequent debate over the use of Confederate flags or other symbols. Re-enactors lost a campsite in Oklahoma because the owner was concerned about the event potentially drawing negative attention, Laughlin said.

But Laughlin said he still hears more positive comments about re-enactments. He doesn't believe there will be any long-term effect on the events, saying they have no real connection with the shootings.

Jack Key of Marksville, La., was with King's Battery in the Army of the West, a mounted artillery unit, for the re-enactment. Key said he has been to re-enactments at Gettysburg, Pa.; Chickamauga, Ga.; Appomattox Courthouse in Virginia; and other locations. He said the events are living history lessons and have real value.

"This is our passion," he said. "The American spirit is, everything we do is great. The Civil War was a great event in our history. You can't be a real American until you understand our history."