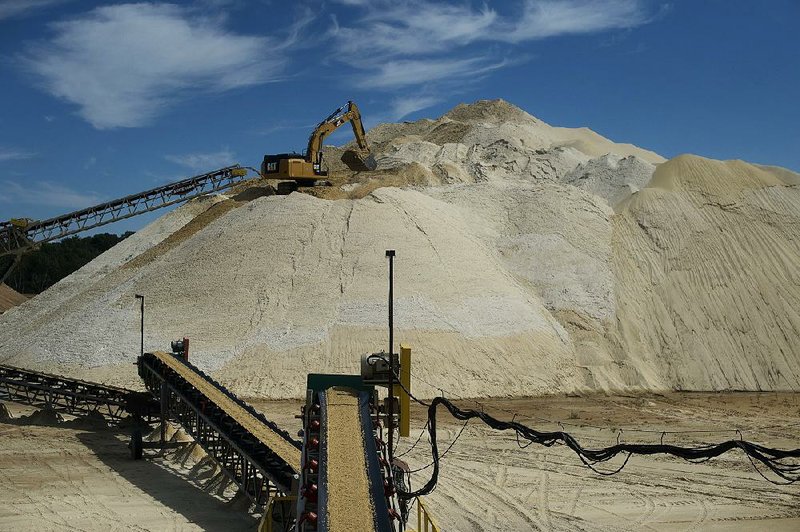 In New Auburn, Wis., a desolate little outpost carved from the rolling pine-tree forests that run into Lake Superior, the collapse in oil is wreaking havoc on every aspect of the economy. 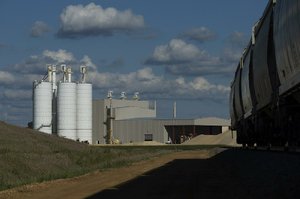 It's not that there's any oil in New Auburn. None in fact for hundreds of miles around. What's there is sand. Real good sand, piled high in giant mounds.

And in what is a little-known offshoot of the shale oil revolution that swept across America over the past decade, the market for sand -- the grit that props open the rocks and makes fracking possible -- exploded, too, transforming almost overnight what had been a sleepy industry that sold primarily to the likes of glassmakers and golf courses. So when the shale boom went bust, it took down the sand industry with it. Prices have sunk almost a third to under $40 per ton.

For the people of northwestern Wisconsin, the epicenter of the sand rush, the economic toll has been harsh. It all happened so fast that many -- like the Bischel brothers: Tom, age 42, and Jeff, 51 -- were blindsided. Back in the winter, the two had pooled their money to open a fast-food joint. They named their ice-cream dessert the Sandstorm, a play on Dairy Queen's Blizzard, and designed an extra-tall drive-thru window to accommodate all the sand-hauling truckers rumbling through town.

By the time they opened T&J's Sandwich Station this May, the sand market was in free fall and the area's mines were scaling back. It's only gotten worse since. T&J's business is down 45 percent. "It's kind of like almost getting your dreams crushed," Tom Bischel said.

The speed with which crude's plunge is rippling through sand mining communities across the Midwest underscores the economic reach of the shale boom. Back when prices were over $100 a barrel, oil was such an incredible wealth generator that industries, old and new, scrambled to cash in on the bonanza and cater to drillers: From rig-makers to the man-camps that housed roughnecks to frack-water recycling companies. Now all of these industries, without exception, are struggling.

The sand bust is as acute as any.

Some mines in the region have cut their workforces and output in half, according to PacWest, an oil-field services consulting unit of IHS Inc. Many smaller operations have closed entirely. Overall, the U.S. frack sand market will shrink to $2 billion this year from $4.5 billion in 2014, PacWest estimates.

In New Auburn, Superior Silica Sands now operates just five days a week. During the height of the go-go days, the company, like so many other miners across the Midwest, was nonstop action, blasting, cleaning and shipping out sand 24 hours a day, seven days a week. From 2012 to 2014, the market had grown a staggering 68 percent.

For a while, "it seemed like there was a bottomless appetite for this product," said Bryce Black, who heads the town board in Frankfort, some 90 miles southeast of New Auburn. "People had dollar signs in their eyes."

How Wisconsin came to be a force in the sand business is a tale that dates back millions of years.

For much of that time, oceans covered parts of the area. The water winnowed and rounded the sand grains, according to Kent Syverson, chairman of the geology department at the University of Wisconsin-Eau Claire. As the water receded, the land became exposed to wind that refined the particles further. What was left lying just below a thin layer of earth was pristine white, strong, round grains, exactly what shale drillers would need to pry open holes in rocks for the crude to seep out.

Combine that high quality with an intricate network of rail lines to ship the product, and a mining powerhouse was born. Wisconsin may be best known for its dairy industry, but it's the frack sand market that the state dominates the most, accounting for more than half of all U.S. output.

"What's so unique about our sand?" Black asks. "The roundness and uniformness of the grain is hard for those of us who are not geologists to understand."

The problem now, though, is that with oil down to $45 a barrel, drillers aren't as particular about quality. That roundness and uniformity suddenly aren't as important as cost. Many in Texas' large Permian shale region have been turning instead to the state's cheaper brown sand.

That's forcing their old suppliers in Wisconsin to lower expenses, too. One key area the miners have targeted is trucking costs. By closing down facilities that aren't nestled along railroad lines, they're eliminating the need to pay truck drivers. For businesses like Chippewa Sand Transport LLC, it's been a crushing blow. The company has cut its workforce by 65 percent.

The Bischels, meanwhile, are reeling from the disappearance of truckers from the streets of New Auburn. Tom remembers them crossing back and forth constantly as he and his brother -- former truck drivers themselves -- prepared their restaurant for its debut.

"And about a month after we got open," he said, "everything just went downhill."