Julie Adams comes back to Malvern — signs book, views films, visits with all 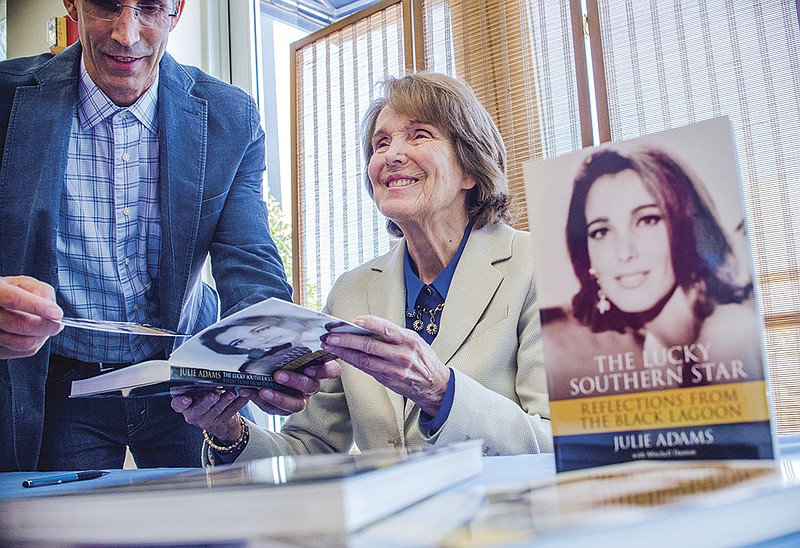 Film and TV star Julie Adams signs copies of her book, The Lucky Southern Star: Reflections From the Black Lagoon, during a book-signing in the library of the College of the Ouachitas in Malvern. Adams, who formerly lived in Malvern, returned for a visit Sept. 17-20. Her son Mitchell “Mitch” Danton, left, helped her write the autobiography.

MALVERN — Film and TV actress Julie Adams, 88, returned to Malvern a few days ago for a quick visit to the town she once called home.

“I always liked Malvern very much,” said Adams, who lived in Malvern during her high school days. “I’m kind of a small-town person. I was very happy in Malvern.

“My father (Ralph Adams, who was born in Malvern) was a cotton buyer and moved around a lot,” Adams said as she sat in a conference room with Stephen Schoonmaker, president of the College of the Ouachitas, on Sept. 17. Schoonmaker and Jody Callahan, director of workforce development at the college, along with Marla and Marty Nix, owners of the Ritz Theatre in Malvern, were instrumental in arranging Adams’ Sept. 17-20 visit to Malvern.

“I also lived in Blytheville and Jonesboro for a while,” said Adams, who was born Betty May Adams in Waterloo, Iowa.

“My father was always looking for the best cotton. I learned how to pull cotton. Acting is a lot easier than pulling cotton,” she said with a laugh.

Adams said she recalled going to the Ritz Theatre in Malvern.

“I always loved going to the movies,” she said. “I was bit by the acting bug when I was a young girl. I didn’t mind the acting bug. That bug was all right by me.”

Adams was accompanied by her son Mitchell “Mitch” Danton. The two told the story of how she first got into acting. She was in a third-grade production of Hansel and Gretel.

“Someone spilled the milk, and I ad-libbed,” she said, laughing. “Someone forgot their lines, and I stepped in and saved the day. I guess I was a natural. That gave me power.”

Danton said his mother lived in Malvern with her uncle, aunt and cousin — the late Rhodope Searcy Norton, Alice Adams Norton (who was a sister to Julie’s father) and John Norton.

Adams went on to graduate from Little Rock High School (now Little Rock Central High School) in 1944 and attended Little Rock Junior College (now the University of Arkansas at Little Rock) from 1944-46. She was crowned Miss Little Rock in 1946, then moved to Hollywood, where she would appear in more than 150 films and TV shows, including the movie that some believe brought her the most fame, Creature From the Black Lagoon. Credits on that film list her as Julia Adams. She first performed using her real name, Betty Adams, until Universal Studios signed her in 1949; then she became Julia Adams, which was modified to Julie Adams in the 1950s.

When asked if she ever thought her character in Creature From the Black Lagoon, who was clad in a white bathing suit and was featured on movie posters, would ever reach the status it seems to enjoy today, Adams laughed and said, “Oh, my goodness, no.

“But not everybody gets to have a custom-made bathing suit.”

Danton said his mother also appeared with “real people,” noting that her role in 1952 as Laura Baile in Bend of the River, with Jimmy Stewart, was “her big breakout role.”

Adams also appeared with Stewart in his 1971 TV show, The Jimmy Stewart Show.

“Getting up there with Jimmy Stewart was like heaven,” she said. “Jimmy was my favorite all-time actor.”

Danton said his mother’s first acting credit was on a TV series called Your Show Time in 1949; she was credited as Betty Adams.

Adams came to Malvern recently to visit, but she also came to promote her autobiography, The Lucky Southern Star: Reflections From the Black Lagoon, which she wrote with Danton.

Following lunch with the college president and others, Adams made her way to the library at College of the Ouachitas, where she read from her book, then signed copies for those in the audience. The room was packed with students, as well as residents from the area.

Billy and Gail Spadoni of Bryant were among those in the audience who were waiting for Adams to appear.

“We are her No. 1 and 2 fans,” said Billy Spadoni, who sported a red T-shirt promoting Creature From the Black Lagoon, the 1954 film that featured Adams as Kay Lawrence and that has become a sci-fi favorite for movie buffs of all ages. “I have watched all of her films. I’ve made sure the grandkids have seen them, too.”

Gail Spadoni said she has always been a fan of Adams.

“She is so beautiful and talented. We had to come today and see her. I’ve always known of her Arkansas connection. I visited her website about three years ago and found her email address, so I emailed her,” Spadoni said.

“One day the phone rang, and it was Mitch, her son and agent,” Spadoni said. “He said, ‘I have someone on the phone who wants to talk to you.’

“I was so excited to get to talk to her. It was a highlight of my life.”

Linda Vaughan Brashears of Malvern was also in the audience. She said she lived on the same street as Adams’ aunt and uncle.

“I really didn’t know her, but I saw her when she would come back to visit them,” Brashears said, adding that would have been in the mid-1960s.

“She drove a little Rambler car. I also remember seeing her at Bonnette’s Beauty Shop on Main Street,” Brashears said.

Another of the Nortons’ neighbors — Martha Nix — was in the audience as well.

“I remember when she would come and visit them,” Nix said of Adams.

Mary Waniewski of Malvern was in the senior play in 1964 at Malvern High School.

“We all knew Ms. Adams was in the audience, but I never did see her,” Waniewksi said. “We were all nervous, knowing she was out there watching us.”

“I knew Julie had been back to Malvern a few times,” Tarlton said. “I always admired her. My late husband saw her walking in the Oak Ridge Cemetery about 20 years ago. By the time he came and told me and I got to the cemetery, she was gone.”

Following Adams’ book signing in the library, she attended the Monsters in Pop Culture class at the college, where she spoke and answered questions.

“I’m excited to be here,” she told the students and their instructor, Tricia Barr, who said prior to the book signing that her students were “so excited” about the movie star’s appearance.

“They have watched the film [Creature From the Black Lagoon] and are going to see it in an actual theater,” she said. “This is a great opportunity for them.”

The Ritz Theatre hosted several screenings of the film during Adams’ visit to Malvern, as well as screenings of two other movies in which Adams appeared — Tickle Me, starring Elvis Presley, and Bend of the River, starring Jimmy Stewart.

Adams told the students she had a lot of fun making Creature From the Black Lagoon.

“I was very impressed when I first saw the creature,” she said.

Danton pointed out that the creature, which was half fish and half man, was actually played by two actors — the late Ben Chapman on land and Riccou Browning underwater.

“They didn’t like the first monster that was created, so they shut down production,” Danton said. “Six weeks later, they came back with the creature that you know today. It was created at Universal Studios with Jack Kevan as the main makeup artist.

“This film crosses all genres. It’s science fiction, evolution, science. … People are mesmerized with it.”

One student asked Adams if she thought the creature was “bad or misunderstood.”

Adams answered: “Misunderstood. I got to be good pals with the creature.”

Adams continues to live in the Los Angeles area. In addition to Mitch, she has another son, Steven Danton. Both are sons of Adams’ ex-husband, the late Ray Danton, who was an actor and director. Both Mitch and Steven are in the entertainment business; Mitch is an editor, and Steven is an assistant director.

Adams travels frequently with Mitch to promote her book, appearing at sci-fi conventions and other events.

“I like show business,” Adams said. “I always enjoyed working.”

“We had people (at the screenings at the Ritz) from all over, as far as Texas,” said Nix. “One of our out-of-state people looked up our theater and was amazed to know we were the oldest first-run theater in the state and plans to [visit] us on their next time through.”