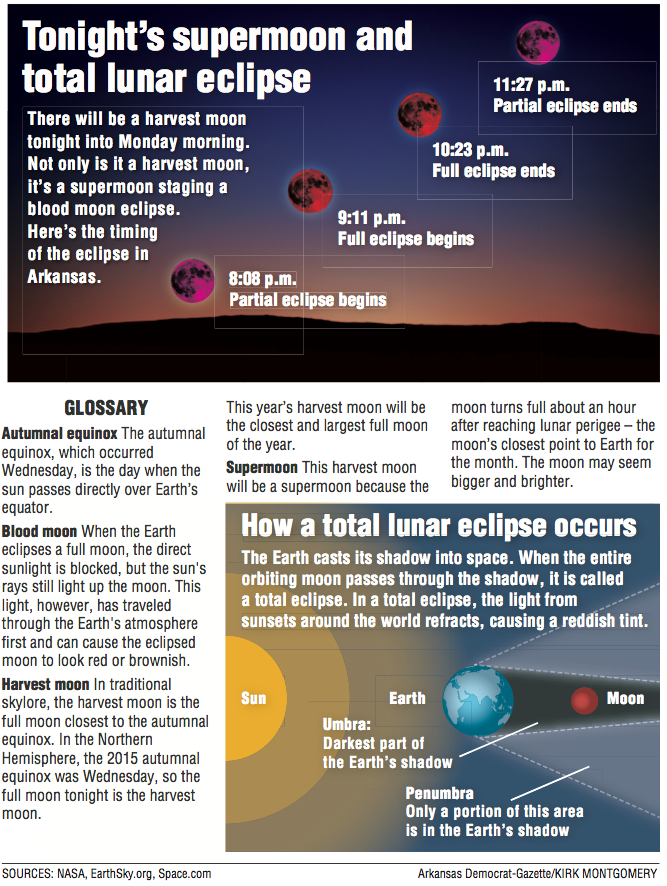 A lunar eclipse tonight brings together a "supermoon" and a "blood moon," a rare occurrence as the Earth, moon and sun align when the moon is at its closest to the Earth and appears red.

The celestial event has happened numerous times over the past centuries, but it won't line up similarly for 18 years.

In Arkansas, the eclipse will begin at 8:08 p.m., when the Earth's shadow begins covering the moon's surface. The moon will be low in the east-southeastern sky at 35 degrees above the horizon, said Bruce McMath, the president of the Central Arkansas Astronomical Society.

"It will start taking on the look like Pac-Man bit the moon," McMath said, referring to the old video game that features a yellow moonlike character with a gaping mouth that chomps things.

At least two observatories in Arkansas will host events this evening. The River Ridge Observatory in Bigelow was accepting reservations for viewers but reached capacity by Friday. The Arkansas Tech University observatory in Russellville will hold a watch party from 8-11 p.m.

The total eclipse will be visible over the entire United States -- especially in the eastern half of the country -- provided the weather cooperates.

National Weather Service meteorologist Lance Pyle in North Little Rock said there is a chance of clouds this evening that may hinder viewers in eastern Arkansas. Northwest and western Arkansas residents have the best chance of clearly seeing the eclipse.

"There is a system building to the east," Pyle said. "We've got a 20 percent chance of rain" this afternoon. "So it looks like there will be clouds at least over the eastern third of the state."

Farther north in Missouri, the Ohio Valley and the Great Lakes region, the skies should be clear, forecasters said.

"This is one of the more advantageous lunar eclipses," said Jeff Robertson, the dean of the College of Natural and Health Sciences and a professor of astrophysics at Arkansas Tech University.

"It's early, it's low in the sky and the angle of light coming at the moon will make it look more like a three-dimensional object.

"You can go into your backyard and just look up."

The moon tonight is referred to as a "supermoon" because it becomes full about an hour after it reaches the closest point to Earth during its orbit.

Robertson said the moon should appear about 14 percent larger than usual.

"This is a naked-eye event," McMath said. "You really don't need a telescope to see it. The timing is wonderful. I don't know how it could be any better."

Rather than being totally dark, though, the moon will take on a dusky red glow because of the sun's light coming around the Earth's edges and illuminating the moon. That gives this eclipse the term of being a "blood moon," Robertson said.

It's also a "harvest moon," or the full moon closest to the autumnal equinox, which was Wednesday.

The combination of the three -- the "blood moon," "supermoon" and "harvest moon" -- have some people predicting catastrophic events.

The eclipse is the fourth total eclipse in two years, called a "tetrad." The past three total lunar eclipses happened on Jewish religious holidays -- Yom Hashoah on April 15, 2014; on Sukkot on Oct. 8, 2014; and the beginning of Passover this April 4.

"Tetrads" were also recorded in 1492 during the Spanish Inquisition, when Jews were expelled from Spain; in 1948 during the Arab-Israeli conflict; and in 1967 during the Six-Day War in Israel.

Televangelist John Hagee of Texas wrote in his 2013 book Four Blood Moons: Something Is About to Change that the latest "tetrad" is a prediction of terrorism around the world and increased nuclear threat.

But Robertson debunked that, noting that people have looked skyward since ancient times.

"Every time there's an eclipse, or a comet or some other natural event, some people say the sky is falling," he said. "It's not happened yet."