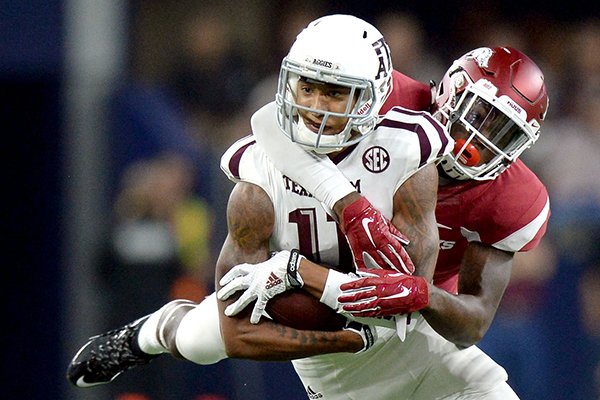 ARLINGTON, Texas -- For the Arkansas Razorbacks it was an all too familiar feeling as they walked off the field at AT&T Stadium Saturday night after a 28-21 overtime loss to Texas A&M in the SEC opener.

Not only was it the Razorbacks' second consecutive overtime loss to the Aggies, who rallied from two touchdowns down to win 35-28 last season, but dropped Arkansas to 0-9 in Coach Bret Bielema's three seasons in games decided by seven or fewer points.

For seniors like Allen, it was the latest in a series of gut-punch losses.

Arkansas is 1-12 in games decided by seven or fewer points, including 0-4 in overtime going back to the 2012 season, when John L. Smith was the Razorbacks' interim coach.

"I think we're just tired of being close," Allen said. "It keeps happening."

It happened again Saturday night after Arkansas took a 21-13 lead on freshman tailback Rawleigh Williams III's 3-yard touchdown run with 14:12 left in the fourth quarter and still led 21-13 when A&M took over after a punt at its 15 with 4:11 to play in regulation.

The Razorbacks couldn't protect fourth-quarter leads in losses to Rutgers, Mississippi State and LSU in 2013 and to Alabama and Missouri last season.

"They're all tough," Arkansas junior cornerback Jared Collins said. "But right now, it feels like this is the toughest loss since I've been here."

"I never like losing, because I come from a winning program," said Razorbacks junior receiver Drew Morgan, who played for Greenwood High School teams that won three consecutive state championships. "I know these other guys have, too.

"It's a dagger in the heart, but I'm going to have a short memory and forget about it. I'm going to see what I could have done better, and I hope this team does, too, and we're going to win this next game."

The Razorbacks' next game is at Tennessee, which lost 28-27 to Florida Saturday, blowing a 20-7 lead.

"We were knocking on the door here, and obviously fell short," Bielema said. "But let's take advantage of the opportunity in the game against Tennessee."

Collins said a loss like the Razorbacks suffered against Texas A&M will be another lesson in learning how to finish games the right way.

"I feel like we all have that mentality that we never want to feel like this again," Collins said. "That'll help us."

"The one thing I know about this crew is we recruited incredible character," Bielema said. "You have a lot haters that will express their short-term support, but I think our guys are unwavering."

Bielema said the Razorbacks are hurting, as they should be after another tough loss.

"We have a lot of upset guys, but on the same account, just because you're upset doesn't solve the problem," he said. "We have to make corrections and move ourselves forward.

"I don't have any reason to believe this group won't do it."

Bielema got choked up at times during his postgame news conference. Collins said Bielema was the same way in the locker room.

"He's a very emotional coach," Collins said. "We know his heart is in it, and that's what we love about him."

"The mind-set of this team is we're moving on to next week," Allen said. "We'll be ready to go."