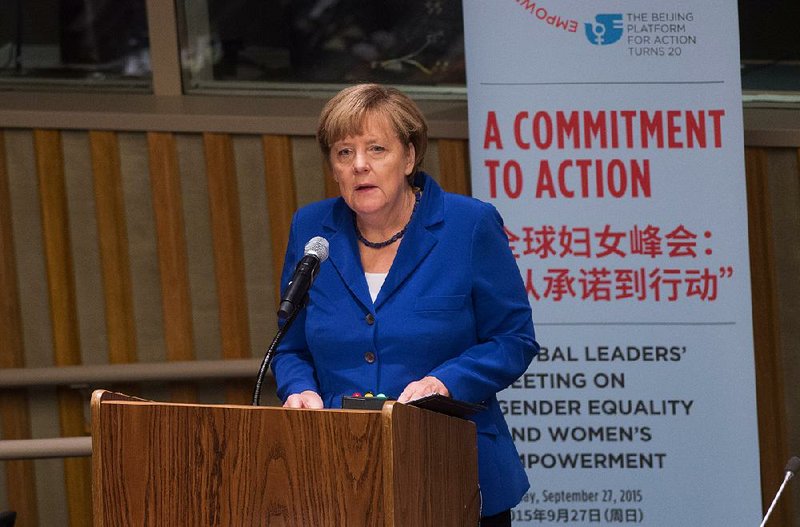 German Chancellor Angela Merkel speaks at the “Global Leader’s Meeting on Gender Equality and Women’s Empowerment: A Commitment to Action” on Sunday at United Nations headquarters.

UNITED NATIONS -- German Chancellor Angela Merkel said working with Turkey is essential to curtailing the flood of migrants out of Iraq and war-wracked Syria, and in grappling with the region's worst migrant crisis since World War II.

Speaking at a United Nations sustainable development summit in New York on Sunday, Merkel said she pledged to bolster cooperation with the government in Ankara after meeting Saturday with Turkish Prime Minister Ahmet Davutoglu. The premier expressed alarm that the deteriorating conflict in Syria could spur another wave of migrants, Merkel said.

"Turkey expressed great concern that a fresh movement of refugees could come out of Syria," Merkel told reporters. "We have to ask ourselves how to end the suffering in Syria."

The enhanced cooperation underscores the German government's view of Turkey as a linchpin in resolving the crisis that's engulfed the region, even as Germany has been critical of Turkish President Recep Tayyip Erdogan's efforts to quash dissent in recent years.

With some 2 million Syrian migrants in Turkey, the country is a key transit point for migrants fleeing war and poverty across its borders with Iraq and Syria, hundreds of thousands of whom make their way to Greece on inflatable boats or across the land border to gain entry into the European Union. Turkey has lobbied to set up a "safe zone" inside Syria that would be off-limits to both Islamic State forces and Syrian Kurdish separatists.

Also speaking at the sustainable-development summit, Renzi said Italy -- which along with Greece has born the brunt of the migrant influx from across the Mediterranean -- was aware of its "moral responsibility."

He said he hoped the European Union would agree on a "common European asylum system because this is the only solution possible."

Merkel was widely lauded by world leaders at the U.N. for her broad acceptance of migrants in Germany, which is struggling with an estimated influx of 800,000 migrants this year -- with some in the government saying 1 million is more accurate. As those pouring into the EU seek passage through the western Balkans to the north, Merkel said a German-Turkish working group is crucial to gaining "better control over refugee movements."

Meanwhile, a Turkish official said 17 Syrians drowned after their boat sank off the Turkish coast on its way to the Greek island of Leros.

Gov. Amir Cicek of Mugla province told the state-run Anadolu Agency that the Turkish Coast Guard rescued 20 other Syrian refugees early Sunday. No one was missing or unaccounted for.

Cicek said the 37 Syrians had boarded the boat at the holiday resort of Gumusluk on the Bodrum Peninsula. It sank soon after leaving the coast.

The governor said an investigation had been opened.

Information for this article was contributed by Patrick Donahue and John Follain of Bloomberg News and by staff members of The Associated Press.