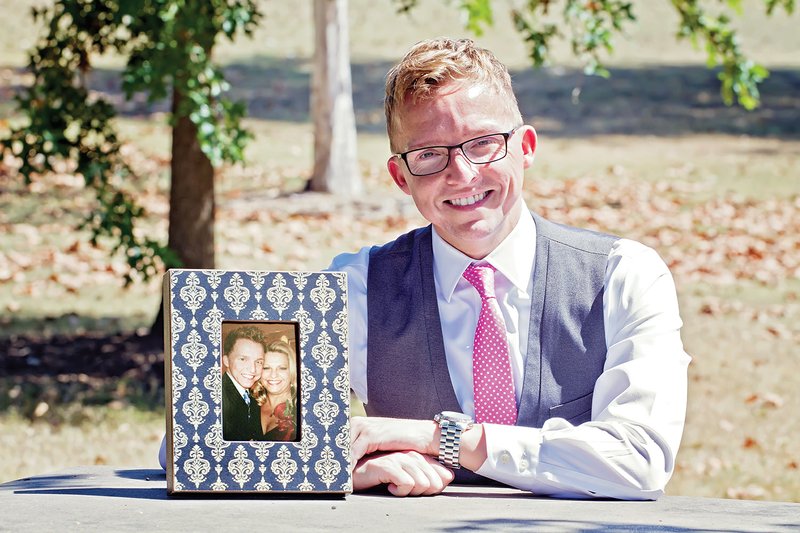 Carl Carter Jr. is shown with a picture of him and his mother, slain real estate agent Beverly Carter.

Carl Carter Jr. laughs a lot, and his father says he gets that from his mom.

“He’s always been a joyful kind of guy,” Carl Carter Sr. says of his first son. “He has the same smile his mother had, except hers was a little bigger.”

Carl Jr. says he can’t help but laugh when talking about his mom. She was just the type of person who could make anyone smile, even if it was at the worst of times, he says.

“She was just a beautiful person,” he says. “She had this kind of high-pitched, almost girlish sound to her voice, even up to the time of her death. So she would be really laying into us as kids, but it was almost comical. Yeah, Mom was in charge of three very hardheaded boys.”

The Carter family does a lot of laughing when remembering Beverly Carter, a wife and grandmother who has been gone from the family for a year.

The real estate agent went missing Sept. 25, 2014, while showing a home in Scott.

Family members still don’t understand why she was targeted and doubts they’ll ever know the whole story, but they say they do know one thing: Beverly’s legacy didn’t end that September night.

“They saw in her everything that they wanted,” Carl Jr. says. “She was beautiful, successful. They tried to destroy her. They saw her as something to break down. But they couldn’t.

“I’ve seen it time and time again, someone dies tragically, and just because of the manner of their death, they are exalted to sainthood. Some of it can be misplaced. But my Mom, she was the real deal. She was as beautiful on the inside as on the outside. Just as everyone says. There is nothing they could take that could diminish her worth.”

In high school, Beverly was a part-time waitress at Bionic Burger, a 10-by-10 “shack diner” in Splendora, Texas, that was a favorite of the locals, Carl Sr. says.

Born in Alabama and raised in Texas, Beverly was the oldest of three girls. She was a good student, played clarinet in the band and was on the dance team at Splendora High School.

And although she didn’t know it, her life was about to change.

Beverly met the love of her life when she was only 16. He was an 18-year-old regular, and she had caught his eye.

“I was sitting there looking at the rearview mirror, watching her,” he says. “It was her smile. For some reason, she always had this smile thing going on. I knew right then she was mine. I knew we were going to be going on a date whether she liked it or not.”

A first date turned into meeting her parents and their approval. And within a year, they were talking marriage.

“Well, we first brought it up that we wanted to get married, and they kind of laughed. But then we told them,” Carl Sr. says.

Beverly was pregnant, and in March 1980, they were married. Her husband says he had $35 in his pocket on their wedding day.

And they couldn’t have been happier.

At that time, the small family was living in Monticello. They lived paycheck to paycheck, Carl Jr. says, moving from rental to rental, struggling to get by.

Carl Jr. says the kids never wanted for anything, noting that Beverly got creative with how she provided for her boys, shopping for deals at yard sales and making the most out of every precious dollar.

But it wasn’t just shopping that took a little imagination. Beverly’s cooking was nothing short of inventive, too.

Carl Jr. describes her daily home-cooked dinners as “poor Southern staples” that had a bit of a twist. He laughs while going through the menu.

“Big pots of beans and jack mackerel patties or goulash,” he says. “They’re my go-to now because I always saw mom as such an amazing cook. It still resounds with me.”

Life was sometimes hard for the young stay-at-home mom, even if the children didn’t know it. But the hard work paid off, and the family moved to the Little Rock area. Beverly’s children went to college and started their own families.

And then life changed again.

The Carter family is not new to tragedy.

At 19, second son Chris was killed in an automobile accident in 2003. The family was shattered in an instant.

Carl Jr. describes the loss of his brother as devastating for his mother, but she kept the family going.

“She was so strong that if she was suffering, you’d never know it,” Carl Jr. says. “It was just part of who she was. I can’t imagine how sad she must have been. But we followed her lead.”

Still, his mother’s resilience has been an inspiration when dealing with her death, he says.

The family rallied after losing Chris, and Beverly pushed forward.

She had obtained her Realtor’s license just before her son’s death and was quickly becoming her own success.

“When I walked into the office, she was the first person I met,” Rhoads says. “And to this day, when I think about her, the first thing I think of is her laugh. You could hear it all over the office.”

Beverly threw herself into her work, training new Realtors and becoming a top-selling agent, Rhoads says, noting that Beverly sold more than $12 million in production in 2013.

“She was just excellent,” she says.

Nothing could hold Beverly back, it seemed, except maybe herself.

Beverly struggled to lose weight throughout her adult life, Sonja Glaze says. As a new grandmother, Beverly underwent gastric bypass surgery and was determined to get healthy.

She approached Glaze with a plan.

“She really wanted to get into shape, so she came to me and said she needed help,” Glaze says. “I told her I wasn’t a trainer, but she said she really needed someone to come work out with her. And we did. She didn’t really need my help, honestly. I just think that God was bringing us together.”

Beverly and Glaze worked out together off and on for years, and often found themselves too busy to get together.

But that all changed when Beverly came up with a “bucket list,” Glaze says.

“She was turning 50, so she had a whole host of things she wanted to do,” Glaze says with a laugh.

On that list was the 10K at the Little Rock Marathon. It would be the last time they would run together.

“We were so busy, but we came together to do this,” she says, her voice shaking. “I didn’t want to work out, but I felt that I needed to do it. I think God knew that she only had so much time and that this was so important to her.”

One office door is always closed in the Crye-Leike Real Estate office in North Little Rock.

“There was a time that we just cried a lot,” Rhoads says. “I can’t give the office to anyone. I can’t even bring myself to go in there. Her office is just empty and closed up.”

Beverly is one of 20 Realtors in the U.S. to be murdered on the job in 2014, according to the Bureau of Labor Statistics.

The two most common causes of on-the-job fatalities for real estate agents are homicides and violent acts. Car accidents make up for less than a third of all Realtor deaths.

Beverly’s death will not be in vain, Rhoads says.

“She would have wanted us to have learned to do something different to prevent this from ever happening again,” she says.

Beverly died during Realtor Safety Month, a time set aside every year by the National Association of Realtors to promote safety education. Realtors are encouraged to have a buddy, stay off the phone while driving, be more aware and have clients fill out information forms.

But even these steps might not have saved her, Rhoads says.

“Beverly didn’t do anything wrong,” she says. “I think what it comes down to is that the agents are going to be more alert. We try to do things a little bit smarter sometimes. But I don’t think this could have been avoided.”

“She was good at her job and so attractive and friendly and successful,” he says. “I think what made her so awesome is what also made her a target.”

Carl Sr. says he doesn’t know what could have been done to save his wife.

“I pray that Beverly is up there waiting for me,” he says. “I wish it was me instead of her, but it wasn’t. I’ve got to close Beverly’s door, but it can’t be closed until it’s all over with.”

“It had been such a perfect day,” Carl Jr. says. “Then it went from just beautiful, sunny to freezing.”

Carl Sr. last spoke to his wife a half hour before she was scheduled to show the home in Scott that afternoon. It wasn’t far from where they lived, he says, and he wasn’t worried about her.

“The house was just across the lake,” he says. “I started to stop by that house that night, but she said she’d be home. It kills me.”

Carl Sr. waited, but after three hours of not hearing from his wife, he went looking for her.

“I saw her car in front of that dark house,” he says. “My heart dropped. She was just gone.”

He called his son.

“I really thought that Dad was overreacting, but I said that I would go over there,” Carl Jr. says. “But it was like she had just disappeared.”

They called the police.

At 9:20 p.m., Rhoads also got a call and went to the home. By midnight, it was clear something was horribly wrong.

“We were formulating scenarios in our mind where she is still safe,” Carl Jr. says. “But I think really we all knew something terrible had happened.”

At 1 a.m., the family received a series of text messages from Beverly’s phone that didn’t sound like her, relatives say. By the next day, more than 250 volunteers were out searching.

A closed-casket funeral was held for Beverly Oct. 4, 2014. More than 1,300 people attended to show their respects.

“There were so many people who loved her,” Glaze says. “It wasn’t her money or stuff or looks or anything like that. It was her heart that drew people to her.”

Members of the Carter family buried their matriarch and began rebuilding their lives. But it hasn’t been easy.

Carl Jr. says he hopes one thing people can take away from her life and legacy is to cherish every moment.

“Almost every single time I spoke with Mom, she would remind me to be present, to be a good dad,” Carl Jr. says. “I hope that people will realize that you should live your life in such a way that you leave an impact, especially on your kids.

“Every moment with your family is precious.”