Morgan making most of opportunity 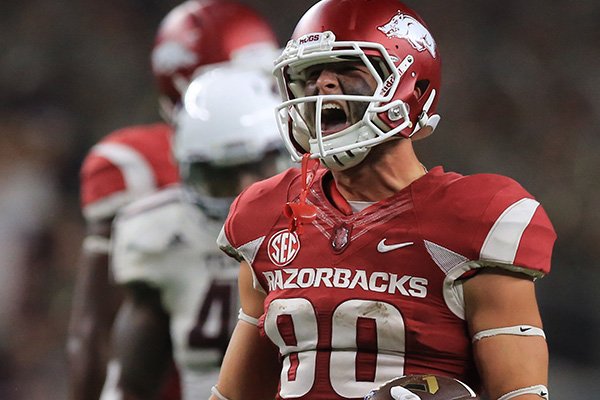 Arkansas receiver Drew Morgan reacts after catching a pass during a game against Texas A&M on Saturday, Sept. 26, 2015, at AT&T Stadium in Arlington, Texas.

FAYETTEVILLE -- An Arkansas unmentionable now gets called out as the Razorbacks' go-to wide receiver.

Drew Morgan, the junior from Greenwood who has been forced to step up while fellow Razorbacks receivers Keon Hatcher (broken foot), Cody Hollister (broken foot) and Jared Cornelius (broken arm) are presumably knocked out for the 2015 season, caught statewide attention last Saturday.

Morgan caught 8 passes for 155 yards and 1 touchdown in the Razorbacks' 28-21 overtime loss to Texas A&M.

Morgan's 18 catches for 303 yards and 3 touchdowns lead the Razorbacks.

Not what new offensive coordinator Dan Enos expected from the rundown of potential play-makers he received upon arrival last spring.

"I guess his name wasn't mentioned in the first part of the sentence," Enos said. "No one ever talked poorly on him or said he wasn't a good player, but it was more about, 'He's got a role, and he'll get in there and make a play or two and this and that."

Seems "this and that" after Morgan lettered on special teams with zero catches as a true freshman in 2012 and had 10 catches for all of 2013 now defines some Arkansas essentials.

"He certainly has seized the moment," Enos said. "He's been a really, really good bright spot for us at a position where we lost three guys that were starters, and two we felt were our two best receivers."

Frank Broyles, 90, retired after 50 years as either the Arkansas Razorbacks athletic director, head football coach or both, still participates with daughter Betsy Broyles Arnold and granddaughter Molly Arnold Gay in the Frank and Barbara Broyles Foundation, which he founded and is devoted to Alzheimer's caregivers.

At 11 a.m. Thursday at the University of Arkansas' Greek Theater, Broyles will unveil the Hog Call Challenge, the foundation's next fund-raiser encompassing three caregiving entities.

From personal caregiving experience for his late wife Barbara, who was afflicted by Alzheimer's in her final years, Broyles authored The Coach Broyles Playbook for Alzheimer's Caregivers.

One million were distributed worldwide through the Broyles Foundation.

Now the Broyles Foundation improvises off another playbook, the ALS Ice Bucket Challenge, for its Hog Call Challenge.

Instead of dumping water over their heads, participants are urged to make videos of people calling the Hogs and challenging friends and co-workers to do the same and pledge monetary support, perhaps in memory of loved ones.

The Hog Call Challenge benefits not only the Broyles Foundation but also the Mayo Clinic for its dementia and caregiving research. It also benefits the University of Arkansas' Eleanor Mann School of Nursing, which reports it has delivered 100 percent of its graduates into full employment within a year of their graduation.

Broyles counts on Arkansans not only calling the Hogs but urging friends coast to coast to do likewise.

"Alzheimer's Disease affects people in every city and every state," Broyles said. "I encourage everyone, regardless of team affiliation, to join us in supporting the caregivers who provide love and support for those afflicted by Alzheimer's Disease."