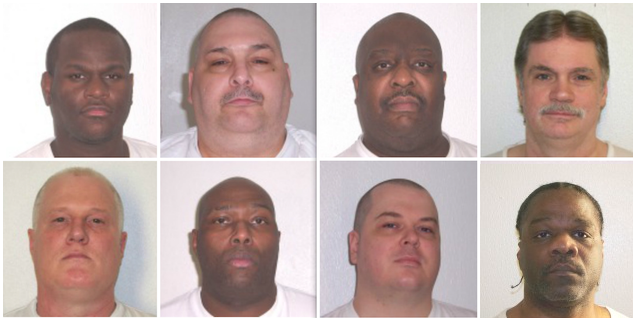 Nine state prisoners -- eight of whom are scheduled for execution in the coming months -- amended an ongoing lawsuit Monday, claiming that the state's recently developed lethal-injection protocol creates a "risk of severe pain."

The inmates, through attorney Jeff Rosenzweig, filed the lawsuit in June in Pulaski County Circuit Court asking for a permanent injunction against the executions because the Arkansas Department of Correction will not reveal the source of the execution drugs.

A footnote on Monday's amendment says a motion for an emergency injunction will be filed later this week. If the judge grants that motion, the eight execution dates -- set earlier this month by Gov. Asa Hutchinson -- will be on hold until the full court case is decided.

The inmates claim in the case amendment that the Correction Department's protocol, which was developed in late August, entails "unreasonable risks of substantial and unnecessary pain and suffering; unbearable anxiety; and/or a lingering death."

Specifically, Rosenzweig said the risk is high that the possible use of compounded drugs -- created in a pharmacy's lab -- could be "counterfeited, adulterated, contaminated, super-potent or sub-potent."

Department of Correction spokesman Cathy Frye said last month that the drugs obtained by the prison system for the executions were not purchased from a compounding pharmacy.

The new procedures were required by Arkansas Act 1096, which was passed in April and allows the state to use either a barbiturate or the drug midazolam, followed by two other drugs, to put inmates to death.

Frye referred a request for comment on the case's development to Attorney General Leslie Rutledge, who acts as legal counsel for the Correction Department.

Act 1096 also shields the state from disclosing any information that may identify the source of execution drugs. The new act voided a 2013 settlement in a previous lawsuit by the same nine inmates in which the Correction Department agreed to reveal the source of any future execution drugs.

His clients have the right to know whether the drugs obtained by the Correction Department were obtained from a reputable vendor, Rosenzweig said previously to the Arkansas Democrat-Gazette.

In June, the Correction Department purchased vials of the execution drugs potassium chloride, vecuronium bromide and midazolam for a total of $24,226.40.

Midazolam has been linked to botched executions in Oklahoma and in Ohio.

In response to an Arkansas Democrat-Gazette Freedom of Information Act request, the Correction Department released redacted invoices as well as photographs of the drug vials that were purchased.

The photographs were heavily redacted with no signs of the manufacturer's name.

Nationwide, suppliers of the execution drugs -- which are commonly used for the treatment of seizures or for anesthesia and other health purposes -- are refusing to sell to prisons that use the drugs for executions because of the outcry from death-penalty opponents.

The state had to turn over its supplies of the execution drug sodium thiopental in 2011 to the U.S. Drug Enforcement Administration when it was discovered that the drug was obtained from a supplier that operated out of a driving academy's offices in London, according to court documents. British authorities had banned exports of the drug in November 2010.

Arkansas is among a growing number of states that have passed or are seeking legislation shielding the identity of the execution-drug providers. A 2014 Associated Press survey of the 32 death-penalty states found that the majority refuse to disclose their execution drug sources. Delaware, Nevada, Ohio and Virginia are exceptions.

Rosenzweig wrote in Monday's filed amendment that the release of the supplier's name is necessary to "determine whether Arkansas's execution procedure will be cruel or unusual" and keeping the information secret "violates the state guarantee of due process."

The eight inmates are the only ones of the 34 on death row who have exhausted all their legal appeals. They are Bruce Ward, 58; Don Davis, 52; Terrick Nooner, 44; Stacey Johnson, 45; Jack Jones Jr., 51; Marcell Williams, 44; Jason McGehee, 39; and Kenneth D. Williams, 36. Inmate Ledell Lee is also a plaintiff in the case.

Ward and Davis are are set to die by lethal injection on Oct. 21. Neither requested clemency by the Sept. 21 deadline.

Johnson and Nooner are scheduled to die Nov. 3. In Johnson's Sept. 18 clemency application, Rosenzweig said that Johnson should not be executed because he may be innocent.

Under the state's protocol, the Parole Board must first review the application and then make a recommendation to the governor to either approve or deny the request. The governor is not obligated to follow the board's decision.

Nooner did not request clemency by Monday's deadline.

Marcell Williams and Jones are set to be executed Dec. 14. They have until Nov. 3 to apply for executive clemency.

McGehee and Kenneth Williams are scheduled to die Jan. 14. They have until Dec. 4 to request clemency.