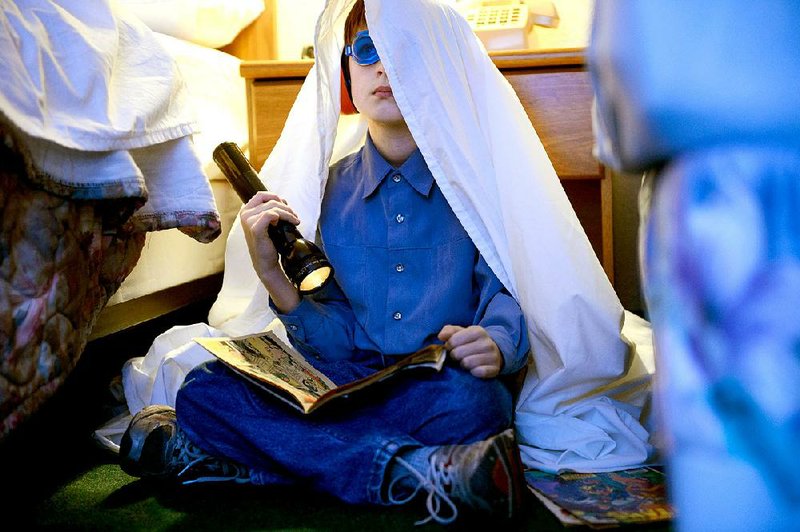 Alton Meyer (Jaeden Lieberher) is possessed of mysterious powers that cause him to be pursued by multiple agencies in Arkansas native Jeff Nichols’ fourth film, Midnight Special.

In Jeff Nichols' Midnight Special, it is the iconography that first arrests us: a goggled boy, reading Superman comics beneath his blanket, headphones stopping his ears. 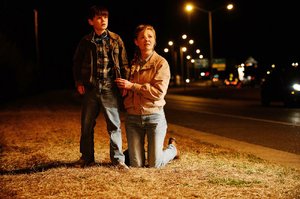 Alton Meyer (Jaeden Lieberher) is reunited with his mother, Sarah (Kirsten Dunst), after he’s taken on the lam by his father in Jeff Nichols’ Midnight Special.

An Amber Alert plays on a television in a down-market motel room. Grim rough men regard what we recognize as the abductee. One of them is Roy (Michael Shannon, Jimmy Stewart's dark and damaged great-grandson, an actor capable of terrible brutality and abject tenderness). He taps his ear and the obedient child, Alton (Jaeden Lieberher, who was so good opposite Bill Murray in 2014's St. Vincent), removes his headphones. Shannon stoops and the boy's arms loop round his neck. It is a rehearsed maneuver that indicates a certain ease between them, but we are not reassured -- we understand how children can come to love their captors, how they know only the lives they know.

Rating: PG-13, for some violence and action

Somehow we understand this child is payload and grail, being moved by night across the continent for reasons that seem as serious as they are obscure. Apparently allergic to sunlight, his eyes sometimes gleam with a strange white light. In the primer-gray '71 Chevy Chevelle sliding through the East Texas dusk, the radio provides a description and a license plate. They dive off the interstate and driver Lucas -- a buzz-cut Joel Edgerton -- pulls on night-vision goggles and douses his headlights. They fly darkly through alleys cut through the piney woods.

The scene is reminiscent of the opening of 1983's Twilight Zone: The Movie, where Albert Brooks is driving through the desert at night with Dan Aykroyd as his passenger. They're singing along to the tape in the car's cassette player when it breaks, leaving them with "no entertainment." Brooks asks Aykroyd if he wants to "see something really scary," then he turns off the lights and flies down the road "playing chicken." The song they're singing along to before the tape snarls is Creedence Clearwater Revival's version of "The Midnight Special."

Eventually it becomes clear that Roy is the boy's biological father, and he believes he has rescued Alton from the clutches of an apocalyptic Branch Davidian-type cult led by Calvin Meyer (Sam Shepard). Calvin had adopted Alton, and had been using the boy as a cosmic receiver, a kind of Mohammed's Radio snatching numerical combinations from the air. From these coded signals, which he has incorporated into his sermons, Calvin has deduced the end is nigh. He's dispatched a pair of thugs to retrieve the boy.

And now the FBI and NSA have converged upon Calvin's compound, interrupting his nightly service, hauling off the faithful on buses to be interviewed about the sect's numerology, which means something to them. And soon the feds are also after Alton, as they understand his fraught potential. Meanwhile, Roy and Lucas and the boy race through the darkness, headed toward a date and GPS coordinates.

It's probably better that you not know too much going into Nichols' elliptical and thrilling joyride, although you've probably already heard how the movie evokes the Steven Spielberg films Sugarland Express, E.T. and Close Encounters of the Third Kind. And John Carpenter's grown-up Starman, and Mark L. Lester's Firestarter, a movie based on a Stephen King novel about parents on the run with their pyrokinetic child (9-year-old Drew Barrymore).

That's heady company, and maybe it points to the director's influences -- Midnight Special feels like a film that could have come out in 1984 -- but it's mildly misleading too. There was a point in the movie where I was reminded of how the blind rat terrier that Laurie Anderson mourns in last year's documentary Heart of a Dog loved to run along the beach, into the dark. There were parts of the movie that reminded me of the late poet C.D. Wright -- the line from her book-length poem Deepstep Come Shining: "There are enough signs. Of lack of tenderness in the world."

What's interesting is how little Nichols makes explicit -- there are questions about Alton, and Roy and Sarah (Kirsten Dunst), Alton's mother, that aren't answered. Nichols is content to let the mystery be, to simply show us what would certainly happen if a certain kind of ineffable grace broke in on our world. The mundane bureaucracies of the earth would attempt to capture it, to exploit it. To weaponize it. And maybe some of those who experienced the miracle would be willing to sacrifice themselves in order that it might achieve some higher purpose beyond their understanding.

I don't want to say Midnight Special is a religious allegory. But others will surely say that. And this is how we treat our messiahs.

Let's not make it out to be more than it is: a rich, intelligent entertainment that a lot of people will enjoy. Maybe it's mostly a movie about having children, about slinging another entity out into the world. You hope that their specialness will be appreciated, honored even. You hope they outdistance you, that they live to see wonders. You have to worry about them.

Some people will not be completely satisfied by the ending of the film, mainly because -- like Nichols' 2011 film Take Shelter -- it does not resolve on a comfortable major chord. There's a real tension between the blockbuster and indie aesthetics here, and it's tremendously interesting to watch how this expertly realized movie balances between these poles, a savvy mix of grit and gloss.

Like that vintage Chevelle, it's a modest-looking machine, with a monster beneath its hood.