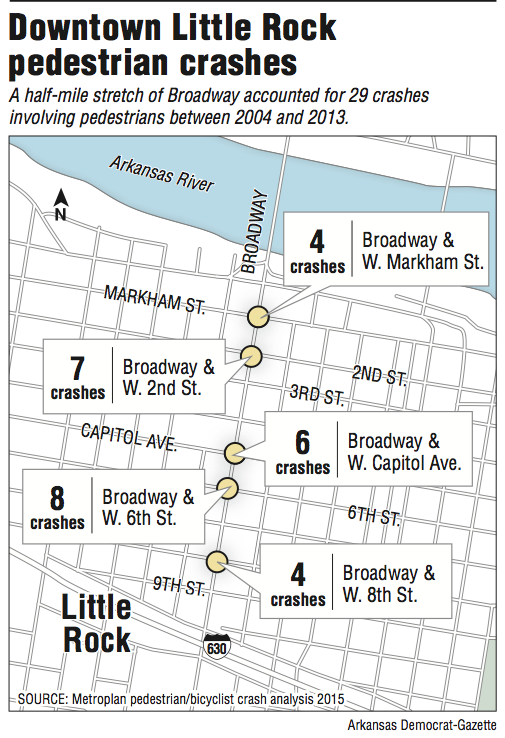 More pedestrians were involved in vehicle crashes on a half-mile stretch of Broadway in downtown Little Rock than any other street in central Arkansas over a 10-year period ending in 2013, according to a Metroplan study.

There were 29 crashes involving pedestrians during that time along Broadway between West Eighth and West Markham streets, a busy corridor of restaurants, banks, government buildings and an 11-story hotel and conference center. The high-traffic area accounted for 11 crashes involving bicyclists, as well.

"I think our pedestrian crashes end up being concentrated, obviously, where pedestrian activity occurs. You see this downtown," he said.

Metroplan, the region's long-range transportation planning agency, conducted the study to evaluate pedestrian and cyclist safety. It's the third such report released by the agency since 2006. Covington said high-crash intersections and roadways identified in the reports are independently studied to identify design issues, funding priorities and safety policies that may need to be addressed.

A study focusing on five high-crash intersections on Broadway in Little Rock was completed two years ago, and some changes, such as signage adjustments and visibility improvements, have already been implemented, Covington said.

"We think it's having a positive benefit for pedestrians, but we really don't have enough data to show what the reduction has been," he said.

"We changed the way we time the signals there, and you get a pedestrian advance, where he'll get his walk light before the light turns green. That gets them out where [motorists] can see them," he said.

Other high pedestrian-crash intersections in Little Rock are La Harpe Boulevard and President Clinton Avenue, where seven crashes occurred during the study period; Baseline Road and Geyer Springs Road, where six crashes occurred; and West 12th Street between Washington and Peyton streets, where eight crashes were logged, according to the report.

During the 10-year period studied, there were 1,435 pedestrians involved in vehicle crashes in the four-county region, 114 of whom were killed. About 40 percent of the crashes occurred at intersections.

"The bicycle crashes, one thing I will say -- and I think we've seen it before -- is bicycle crashes don't occur on specific bicycle facilities, where there's bike lanes or bike routes," Covington said.

The study, based on crash reports and Arkansas State Police data, found that black men and black youths were significantly more likely to be involved in a pedestrian crash.

"They're really common in minority communities where residents live on one side and those kind of commercial [buildings] are on the other side," Covington said.

Henry, a city traffic engineer for 27 years, said even calculated measures like adjusted signal times can be negated by an impatient motorist.

"I think the biggest thing that needs to happen is the drivers need to be educated to the fact that the pedestrians have the right-of-way," he said. "If you're a pedestrian and you're in the crosswalk, you've got right-of-way and the driver is supposed to yield to you."

"Don't park in the darn crosswalk," he said.