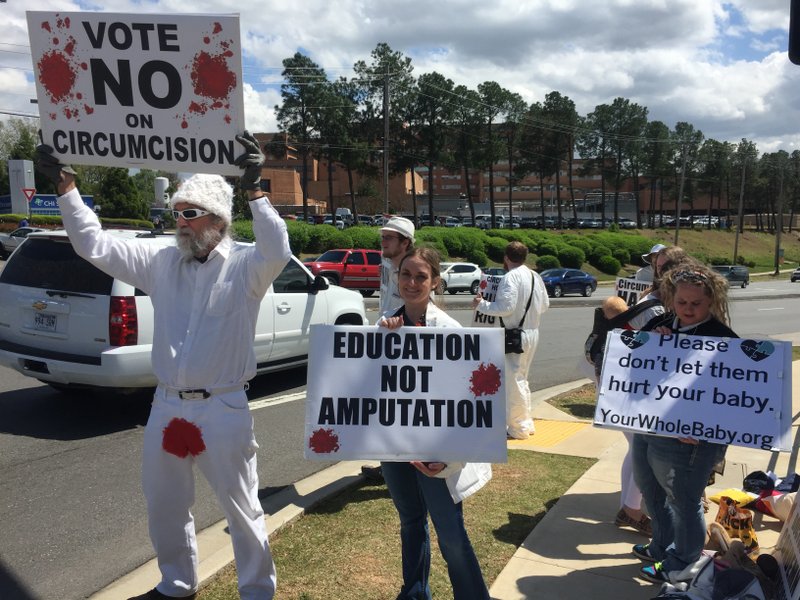 Anti-circumcision protesters hold signs at the corner of Markham Street and University Avenue, where they elicited honks and jeers from passing traffic Wednesday afternoon.

An anti-circumcision protest of about a dozen men and women — some sporting white clothing with fake blood stains — elicited honks and jeers from passing cars at the corner of Markham Street and University Avenue on Wednesday afternoon.

The Bloodstained Men, a nonprofit from Davis, Calif., is conducting a two-week tour of states including Arkansas, in an attempt to raise opposition to the common medical procedure for infant boys, said Harry Guiremand, who identified himself as the leader of the group.

Guiremand said the group advocates against circumcision for newborns who can't make a decision about the procedure, which he called "a cure in search of a disease."

The American Academy of Pediatrics says the health benefits of circumcision outweigh the risks but not does universally recommend the procedure.

Whitney Waggoner, a "birth worker" from Cabot who teaches childbirth classes, came to join the protest with her 7-month-old son, Jasper, who she said is not circumcised.

"It's a financially lucrative business to circumcise boys," Waggoner said. "That's what we're here for: [for] those who cannot speak."

Guiremand said the group has protested at hospitals before, but they decided to use the street corner across CHI-St. Vincent mainly because of the intersection's heavy traffic.

"We get lots of thumbs-up and lots of upturned middle fingers," Guiremand said. "This costume gets us the attention that allows us to start the conversation."

As he spoke, two women in a car drove by and yelled, "It's in the Bible."