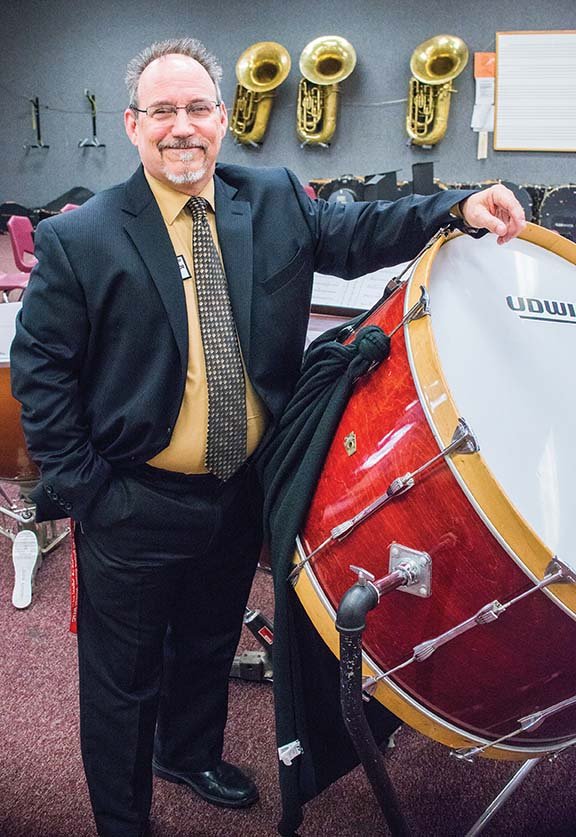 Kevin Taylor first-year principal of Harmony Grove Middle School began his career in the school district more than 30 years ago when he started its music program.

It’s been more than 30 years since Kevin Taylor first walked into an old maintenance building that had been converted into a band room in the Haskell Harmony Grove School District.

“That first day I’ll never forget,” Taylor said, reminiscing back to a day in 1985. “The old band room is still down there. I had 11 kids because they didn’t know at the end of the previous year that [the district] would offer band. I had to go to study halls and solicit kids that would be interested.”

That was the year Harmony Grove got its first music program. Taylor was hired by now Superintendent Daniel Henley, who Taylor said told him if the district was going to have a music program, it would be a quality one. Taylor’s response was, “Yes, sir.”

“If you’re not going to do it well, then why do it?” Taylor said. “I did it all — elementary music, band and choir. It was hard, but it was amazing the stuff that we did in that time period. Even though we didn’t have a football team, we still marched because the kids needed that framework. They had to be able to do that if they were ever going to play in college.”

Of Taylor’s original 11 band members, three went on to play after graduation through band scholarships. His original flutist, Carla Bachelor, now teaches English at the high school and watches her daughter, Hannah, play in the band, a tradition that runs strong at Harmony Grove. Taylor said many former students come back so their children can walk the same halls and get the same level of attention that their parents did.

“Harmony Grove is one of those jewels that hasn’t been discovered yet,” he said. “It’s still a small enough school that we have that caring for each kid, but we’re growing in leaps and bounds.”

For Taylor, music is, and always has been, a family affair. It seems to be at the forefront of his earliest memories and in every detail since. As a classical piece plays softly in the background, he recalled how music shaped his childhood.

“I started playing piano when I was 7, and I began taking violin lessons when I was in fourth grade,” he said. “I always had that interest. I can’t remember not [having it]. One of my earliest memories was when I was probably 4 years old, and it was at something at my grandparents’ church. We were all standing on the stage singing. It was always there. It was always something I was interested in and something I wanted to study.”

Taylor did go on to study music at Henderson State University in Arkadelphia. It was also during his college years that he met his future wife, Lisa Hinds, a student at the University of Arkansas at Little Rock, while they were working during summer break. Appropriately, their love story has a touch of music as well.

After marrying on New Year’s Eve in 1980, the couple graduated from college and pursued careers in music education, and music is all that Taylor has ever taught. When he accepted the position at Harmony Grove, his wife began teaching choir in the Bryant School District. Their daughter, Emilia Lamb, who grew up in her parents’ choir and band rooms, now teaches elementary music in Greensboro, North Carolina. In 1997, their small family came together under one roof when Lisa moved to Harmony Grove as the choir director, a position she still maintains.

“We have so much in common because of what we do,” Taylor said. “We’re always able to talk shop, which is good because we’re able to bounce ideas off one another. We had offices right across from each other since she came here until this year. She’s right here on campus, but we’re not right down the hall from one another. That’s been really different.”

The 2015-16 school year has been the first year for Taylor in his newest role — middle school principal. He admits that years of directing students has taken its toll on his hearing, which helped in his decision to move into administration. While he misses wielding the baton, he said, he’s proud to serve the students at Harmony Grove Middle School.

“This is not in any way a consolation prize,” he said. “I’m honored to be a principal. I’ve been able to take a lot of the things I did with my band kids and apply it to a much larger canvas now. I inherited a wonderful faculty that has been really good about jumping onto the bandwagon — no pun intended. I miss the daily hands-on with the kids in the classroom, but it far makes up for it when I see them in the hallways and I get the chance to say, ‘Hey, I saw your last test. It was fantastic.’”

Taylor starts each morning at the middle school with a wake-up call. He has students stand up, stretch and physically reach for their goals for the day. Afterward, students recite their times tables for “math minute.” Taylor said he wants to hear their voices coming down the hall. As he says, “the louder the prouder.” While he works to engage students’ minds, he wants them to focus on their characters as well, which is why each month students focus on one of six pillars of character — trustworthiness, respect, responsibility, fairness, caring and citizenship.

“Since we started at the beginning of the year, I’ve honestly seen kids holding doors for one another, kids being more courteous to one another,” Taylor said. “It really cuts down on discipline problems and things like that. The standard that you hold up is what you’re going to get back.”

And the high standards that Taylor set for his music students all those years is something he has been able to see a return on. He said the music program at Harmony Grove became something much larger than anyone expected. Out of the original 11 students, he said, one is still an avid musician, and recently, Taylor received a compliment on a former student who is now in college.

“To know the next generation is going to be able to continue the things we’ve done, that’s rewarding,” he said. “I’ve just always been blessed with really good kids. There’s a lot of them that have taken up the mantle. It’s so cool to see them wielding a baton.”

But for now, his focus is on these fourth- through sixth-grade students — the ones coming through the office for various reasons, Taylor calling each one by name. He tries to work with the early-band students as much as he can, still keeping his hand in the music program he created more than 30 years ago.

“It’s fun,” Taylor said. “It gives me a chance for my kids to see me as more than just their principal.”

He added with a laugh, “They’re very well behaved when I’m in the classroom.”