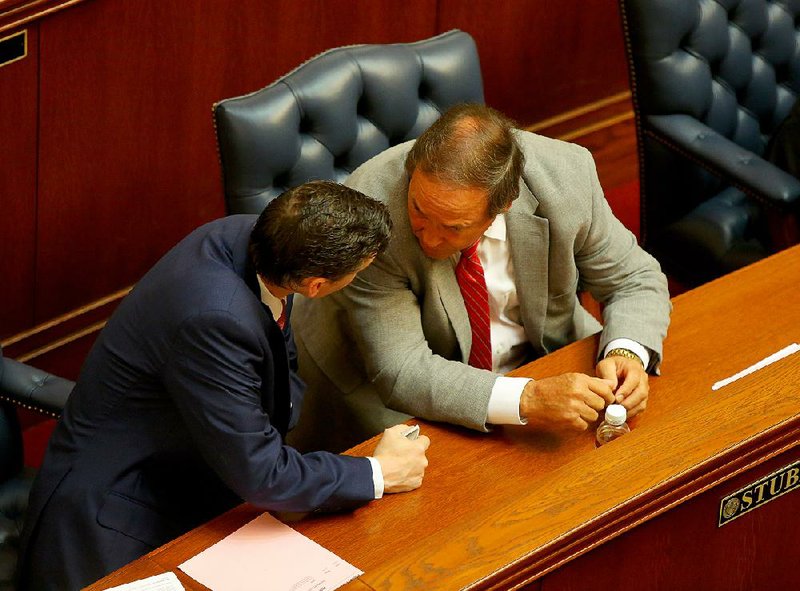 Sen. Scott Flippo (left) confers Friday on the Senate floor with Sen. Gary Stubblefield. Both voted against the expanded Medicaid plan and say they’ll oppose funding for the program. ( Stephen B. Thornton)

The Republican-dominated Legislature convenes Wednesday for its fiscal session. At stake is the future of the Arkansas version of Medicaid expansion that provides health insurance to about 267,000 low-income Arkansans. 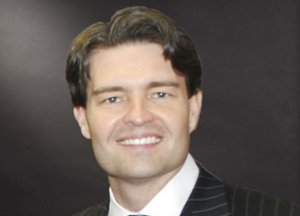 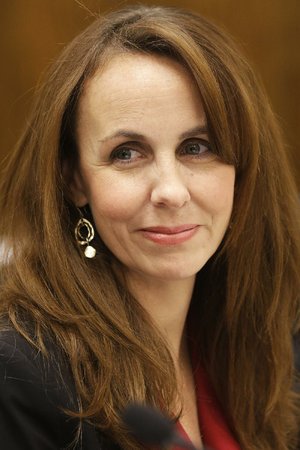 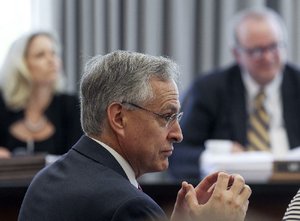 Photo by Benjamin Krain
UAMS Chancellor Dan Rahn talks to the University of Arkansas System Board of Trustees about the university's budget and plans to add more hospital beds. 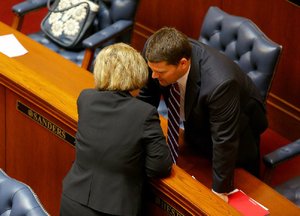 Photo by Stephen B. Thornton
Sens. Cecile Bledsoe and Bart Hester talk Friday during the special session on Medicaid expansion. Bledsoe and Hester are among a group of senators who plan to block reauthorized funding for the program in the Legislature’s fi scal session that begins Wednesday.

The session begins at noon at the state Capitol.

Twenty-seven votes are required in the 35-member Senate and 75 votes in the 100-member House to reauthorize use of federal Medicaid dollars to purchase private health insurance for low-income Arkansans in fiscal 2017, which starts July 1.

"It is going to be a hard lift, absolutely," said Sen. David Sanders, R-Little Rock, one of three legislative architects of the private-option program that Gov. Asa Hutchinson calls Arkansas Works.

State lawmakers and Hutchinson "are preparing themselves for the real possibility that doesn't happen," Sanders said.

Hutchinson has warned that failing to reauthorize funding would create a shortfall of more than $100 million in the general-revenue budget.

The governor's proposed budget would increase the general-revenue budget by $142.7 million to $5.33 billion in fiscal 2017, and factors in Hutchinson's nearly $101 million cut in individual income-tax rates enacted by the 2015 Legislature. Most of the increased state support would go to the Department of Human Services and the public schools.

Sanders said there is a tendency to lose sight of the people who are being helped by the program.

"Candidly, that has continued to matter more and more with each passing month, each passing year that we have done this, he said."

The Medicaid expansion extended coverage to adults with incomes of up to 138 percent of the poverty level: $16,394 for an individual, for instance, or $33,534 for a family of four.

Legislation enacted in last week's special session would make changes that Hutchinson has said would encourage enrollees to stay employed and take responsibility for their health care. Those changes include charging premiums of about $19 a month to participants whose incomes are above the poverty level, subsidizing some enrollees' coverage through employer plans and referring some beneficiaries to job-training programs.

Sen. Gary Stubblefield, R-Branch, an opponent of the Medicaid expansion, said "I just don't believe that we are helping people by giving them free stuff, [people] who are healthy and who can work.

"I know that is philosophical, but in the long run not only is the nation in debt, we are going to leave our kids and grandkids with a debt," he said. "I know that's far out, but I try to to look at things with a little more vision than the next day."

Hutchinson last week told lawmakers the stories of two people, pointing out that the majority of the people on the program are working.

"It is about the lady in West Memphis who works full time at a sandwich shop and has a 4-year-old daughter and is seven months pregnant. She has health coverage, doesn't go to the doctor a lot but she has peace of mind because she has prenatal care and health coverage that is otherwise unavailable," the governor said.

"It's about a 60-year-old gentleman in Jonesboro who has been a self-employed painter and handyman for more than 40 years. He had heart problems. It slowed his work capability down. He could not afford health insurance. He got health insurance because he made less than the federal poverty level. He said 'I've never asked for help.' He didn't want to be one of those guys that asks the government for help but he says he would have died without this health care coverage," Hutchinson said.

Stubblefield said 10 Republican senators plan to vote against reauthorizing funding, after voting against legislation changing the private-option program in the special session.

That's enough votes in the Senate to block approval of funding for the program, he noted.

The 10th Republican Stubblefield mentioned, Missy Irvin, R-Mountain View, declined to say last week how she will vote. She voted for funding the program in 2013 before she voted against it in 2014 and then voted to fund it in 2015.

Senate President Pro Tempore Jonathan Dismang, R-Searcy, said he wants the Senate to consider the appropriation for the Department of Human Services' Medical Services Division, which includes the spending authority for the Medicaid expansion, in fiscal 2017 at the end of the second week of the fiscal session.

"I just think it is important for us to know where we are and have that vote," he said.

"But I am still optimistic at this point that we can get 75 percent approval in both chambers," said Dismang.

"Am I concerned that we don't pass it? Yes. I think we should all be concerned."

Stubblefield said he expects the Senate to be in a standoff for a while.

"I don't think these 10 are going to flip [their votes] like some did the last time. I don't think that is going to happen because if they do, it would end some of their careers pretty quickly," Stubblefield said.

"I wish there were another way. Sometimes, you just got to win something."

Asked about Hutchinson's warning that the state would face a $100 million budget "hole," Stubblefield said "I am not sure that all those numbers are actually factual."

"I don't know where they are getting them. You can make up numbers all day long," he said. "I agree with the fact that he's trying to put in work incentives."

If Medicaid expansion is reauthorized, the state expects to spend $43.4 million in state general revenue on the program, including state matching funds of $40.76 million in fiscal 2017, said Jake Bleed, a spokesman for the state Department of Finance and Administration.

The state is required to pick up 5 percent of the cost of the program starting Jan. 1, and its share gradually increases to 10 percent by 2020. Duncan Baird, the state budget administrator, said the state's $40 million match required for the final six months of fiscal 2017 will be covered by increased insurance premiums, resulting largely from the private-option policies.

Programs for the medically needy, pregnant women, breast and cervical cancer, and the aged, blind and disabled as well as for the growth in disability enrollment will save money from a reauthorized program, Bleed said. The combined savings would be an estimated $97.46 million in fiscal 2017, which the state would be required to pay if Arkansas Works is not reauthorized, Bleed said.

"These are populations that would transition from the expansion back onto the traditional Medicaid program," he said.

In addition, "the state would be obligated to pay additional amounts for uncompensated care which would otherwise be reduced by increased insurance coverage under Arkansas Works," and the costs at the University of Arkansas at Medical Sciences, the Department of Human Services' Behavioral Health Division, and departments of Health and Correction would total $38.85 million, Bleed said.

Failing to reauthorize the Medicaid expansion also would end taxes collected on insurance premium payments for the program that are estimated to be $22.26 million, he said.

But Hester said that "we are going to have over $100 million of surplus in [fiscal 2016]. If we have to fill a budget deficit because of this appropriation falling, we have surplus funds from 2016 to do that."

In addition, "there are lots of funds that are out there for corporate welfare that I don't think are necessary," Hester said, citing in particular the quick-action closing fund that is used to help companies expand in the state and attract new companies.

Among other things, he said he favors a 3 percent cut in state funding for higher-education institutions.

"Reducing expenses is people, so yes, we would have to look at programs," Rahn said when asked whether a termination of the Medicaid expansion would lead to layoffs. "Everything about UAMS would be affected."

The state has a $51.6 million surplus in the bank, and $31.1 million is left in the rainy-day fund with $20 million earmarked by the governor to help increase state funding for highways to match additional federal highway dollars, he said.

Hutchinson's proposed budget would increase general-revenue funding for the Department of Human Services by $111.9 million to $1.44 billion.

The governor proposed increasing the state Department of Correction's general-revenue budget by $4 million to $340.7 million and keeping the Arkansas Community Correction agency's budget at $78.6 million while cutting funding for county jail reimbursement by $11.4 million to $16.4 million. Baird said the latter is proposed because the number of state inmates held in county jails has declined.

The proposed budget doesn't include a cost-of-living raise for state employees and wouldn't increase the budget of $733.5 million for the state's two- and four-year colleges.

He said the budget plan in the works envisions roughly $30 million in cuts to discretionary state funds for public schools and a 3 percent to 5 percent reduction to other agency budgets.

"We are hopeful by the time that we start the fiscal session, we'll have a pretty good idea of the shape of it and can actually really start talking to members and showing them what their options are going to be," Gillam said.

Information for this article was contributed by Andy Davis and Spencer Willems of the Arkansas Democrat-Gazette.