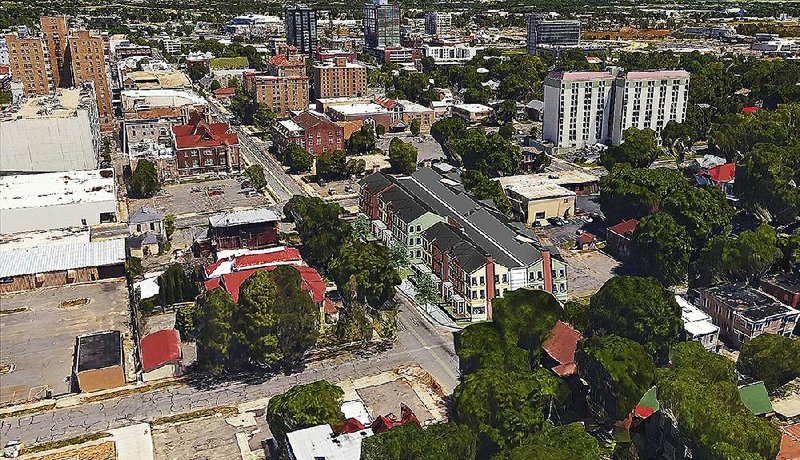 A month ago the firm received push-back from the commission, largely because of the size of the Scott Street Flats project. Moses Tucker has redesigned the project, which has garnered approval from the city’s Department of Planning and Development staff for a second time.

Projects in the historic district are evaluated on 11 criteria, including mass and scale, building materials, architectural style and general design. Concern expressed to the city’s Planning Department and during the March 14 meeting and in subsequent phone calls and emails from the general public have centered primarily on the structure’s size.

A certificate of appropriateness is needed so existing structures can be altered. There is some debate, Moses Tucker Chairman Jimmy Moses said, on whether the certificate is intended for new construction projects, but his firm addressed concerns expressed by the commission as they pertained to Scott Street Flats, an $8 million project.

Despite approval from the city, Moses believes the project faces an uphill climb. To proceed with the development, Moses Tucker must secure support from four of the five commissioners voting tonight. Commissioners Jennifer Carman and Dick Kelley recused themselves from the vote last month and are expected to do so again because they own property on the same block.

“We have staff approval and support, but our working with the commissioners doesn’t look particularly favorable in spite of all that,” Moses said. “We remain hopeful. We thought taking a month to defer the project, working on a redesign with commissioner input and staff input would result in a project that surely would be met with good favor and general support. I would tell you at this point it hasn’t been a rousingly optimistic report. I’m just being honest about it.”

Commission Vice Chairman Jeremiah Russell said during the March meeting that the project was “not appropriate” and considered the height “a serious issue.” Commissioner Rebecca Pekar described the size as “overwhelming.”

A center unit of the complex has been replaced with a courtyard to reduce “the perceived mass of the building when walking or driving along Scott Street.” A swimming pool has been eliminated from plans for the Scott Street Flats, which Moses Tucker said would be the first development on the land in nearly 50 years.

If built, the complex will be 44.5 feet tall, a reduction of 5 feet from the original proposal. More brick will be used on the building’s exteriorto more closely resemble houses in the neighborhood. Landscaping will replace planned patios and the height of fencing along Scott Street was reduced to 6 feet.

“We can talk with applicants about the appropriateness of a project even before they file,” Minyard said. “They can always discuss with staff, but we don’t offer design tips.”

A 36-unit Moses Tucker development was approved in March 2015 by a unanimous vote of the same commission. The Row at Legion Village gained approval the first time it was submitted.

“The project on Scott Street is very similar in style, design and nature to Legion Row,” Moses said. “We have altered Scott Street, working with the planning staff, so that it has its own distinctive look and blends well with the neighborhood. We were floored when we ran into opposition which we didn’t know about until several hours before the commission meeting a month ago. We went back to the drawing board and we’ve tried to address each point to the best of our ability.”

Commissioners are also considering a certificate of appropriateness for a new single-family home at 901 Cumberland Street. A vote on the proposal was also deferred after commissioners expressed concern.

Planning and development staff have recommended denying a certificate of appropriateness.

Applicant Troy Deal declined to comment prior to Monday’s meeting.

Both the apartment complex and new home construction are being planned for vacant lots. Minyard said there are approximately 30 vacant lots in the district.

Whether the commission’s guidelines apply to new construction or just changes to existing buildings is open for interpretation, Moses said. Infill of those vacant lots is critical, he said, and if the proposal is defeated the firm will consider legal action.

“In our opinion, as downtown developers for the last 35 years, new construction is desperately needed,” Moses said.