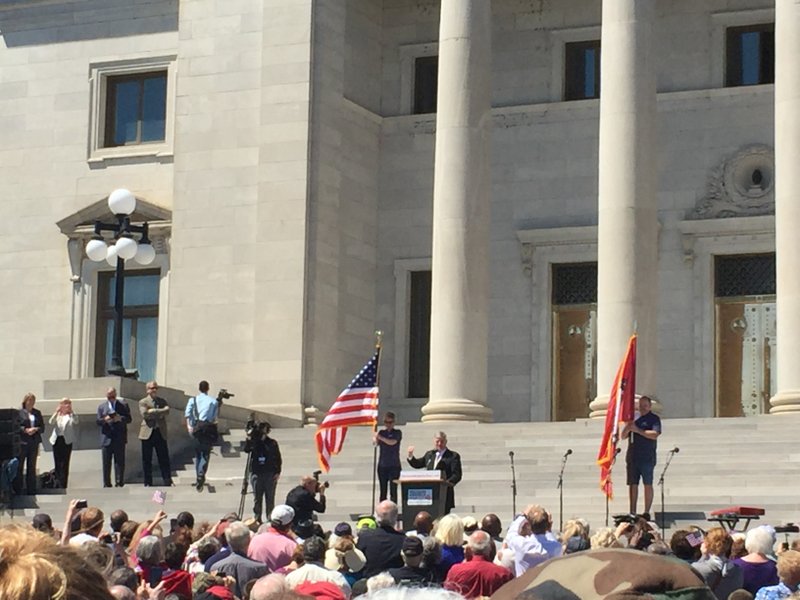 A spokesman for the Secretary of State's office estimated that more than 9,000 people attended a rally Tuesday to hear evangelist Franklin Graham speak.

Thousands of worshipers flooded the state Capitol on Tuesday to hear evangelist Franklin Graham declare that "godless" politics are taking over governments across the 50 states he is touring.

Graham's speech in Little Rock is one leg of an election-year tour of every state's capital. The son of Billy Graham plans to speak in the capitals of Alabama, Mississippi and Texas in the next two weeks.

In a nearly 40-minute speech, Graham said he would not endorse any candidate or party, but specifically referred to "people on the left" organizing political activism, and urged those in attendance study the issues and vote.

Touching on specific issues, Graham called abortion, same-sex marriage, materialism and a focus on profit over morality the "sins of the nation."

The greatest applause came when Graham argued against political correctness and the separation of church and state.

Several churches shuttled bus loads of people to the event, and some groups set up stands petitioning for term limits while others handed out small American flags that many stuck in their hair or baseball caps.

A spokesman for the secretary of state's office estimated that more than 9,000 people attended the rally and said two of three people who collapsed during the event had to be taken to the hospital.

Adam Leavins, a 37-year-old pastor at the Unlimited Church in Maumelle, came with his wife and four daughters.

Wearing a black shirt with a red cross and the words "this shirt is illegal in 53 countries" Leavins said there is a "slippery slope" from secularism to countries where Christians are persecuted.

"We see in lots of states that if you disagree with that, you get shut down," Leavins said.

Leavins said he identified as a "conservative Christian" who typically votes Republican and plans to support Ted Cruz after other candidates dropped out.