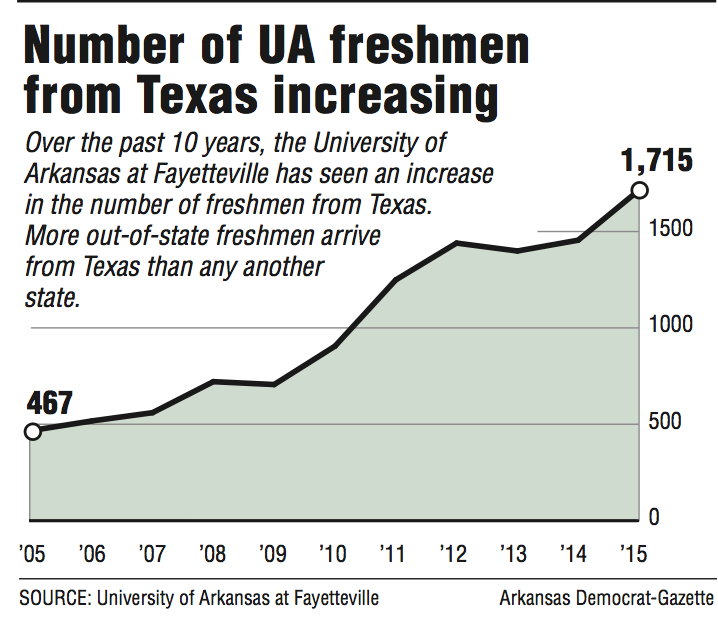 A graph showing the increasing number of UA freshman from Texas. (Arkansas Democrat-Gazette / Source: University of Arkansas at Fayetteville )

FAYETTEVILLE -- Higher demand from in-state students applying to the University of Arkansas at Fayetteville would trigger more stringent admission standards for out-of-state applicants under part of a proposed change to UA policy.

Revising the policy would allow standards to change each year as needed. Under a new policy, the UA could better control enrollment growth and maintain a desired balance between in-state students and those from outside Arkansas, said Suzanne McCray, UA's vice provost for enrollment management and dean of admissions.

Total enrollment at UA has increased by 50 percent over the past decade, aided by a growing number of students from outside Arkansas.

McCray presented the amendment proposal Wednesday at a meeting of UA's faculty senate. The group is expected to vote on it next month.

The change would not affect admission standards for Arkansas applicants, who automatically qualify if they have individual composite scores of 20 on the ACT college entrance exam and 3.0 minimum grade-point averages.

If approved, the policy change would affect incoming freshmen in 2017.

The amendment does not specify any new requirements. It states only that out-of-state students "may be held to a higher standard if enrollment demand from Arkansas resident applicants requires it."

Students from outside Arkansas made up about half of the 2015 incoming freshman class that consisted of 4,871 first-time, full-time, degree-seeking students.

Ten years earlier -- when UA's freshman class consisted of 2,693 first-time, full-time, degree-seeking students -- out-of-state students made up about 30 percent of the total.

"Depending on the number of applications and the quality of applications we receive, we could set [the out-of-state standard] at a 21 [ACT score] and a 3.2 [grade-point average] so that we can control growth," McCray said. Also, students could be put on a wait list, she said.

McCray said in an email to the Democrat-Gazette that the policy change would be "a mechanism for guaranteeing" the right balance in a freshman class, regardless of the number of applications received.

"Our goal is to maintain a 50-50 split between in-state and out-of-state students in the freshman class," McCray wrote. "Last year was the first year we went slightly under 50/50, and that will likely happen again this year."

Increases in out-of-state students have become a national trend among schools similar to UA. In January, The Washington Post reported that among schools considered "state flagships," 43 out of 50 enrolled a smaller share of in-state freshmen in 2014 than a decade earlier. The Post also reported that 10 "state flagships" had freshman classes with a majority of out-of-state students.

Joe Steinmetz, UA's chancellor since Jan. 1, told the Democrat-Gazette in February that "in my own mind, 50-50 is fine, as long as we're still admitting more Arkansans than we ever have before." He also said UA could improve its transfer policies to benefit Arkansans looking for UA degrees.

About five years ago, the University of Mississippi changed its admission policies to raise the bar for out-of-state students, said Whitman Smith, the university's director of admissions. With growing enrollment, the school was among the fastest-growing in the country, he said.

"Most of our growth was from outside the state, and so what we needed to do was figure out a way to slow our out-of-state student growth so that our infrastructure could keep up," Smith said.

Last fall about 55 percent of the school's incoming freshman class was from outside Mississippi, he said.

The proposed policy change was written by the UA faculty senate's admissions and appellate board committee.

McCray said the most recent change in UA's admissions policy took effect in 1999, when the grade-point average automatic entrance requirement was raised to 3.0 from 2.5.