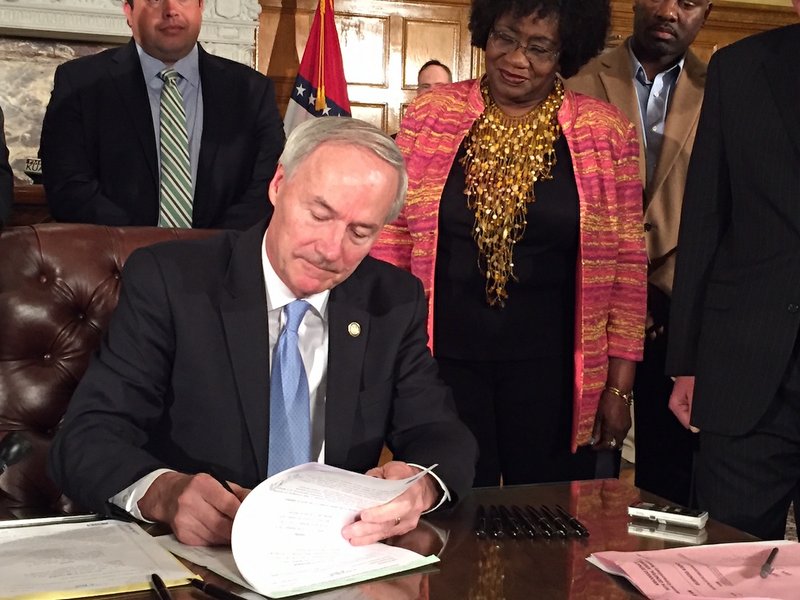 Gov. Asa Hutchinson on Friday, April 8, 2016, at the state Capitol signs into law his Arkansas Works plan, which keeps and reworks the state's hybrid Medicaid expansion.

LITTLE ROCK — Republican Gov. Asa Hutchinson and legislative leaders tried to persuade Democrats on Monday to support a plan to save Arkansas' hybrid Medicaid expansion by initially voting to defund the subsidized health insurance for thousands of poor people.

Hutchinson promised to defend any Democrats criticized for supporting the defunding measure under the approach, which is aimed at allowing the governor to reinstate the hybrid expansion through a line-item veto. House Democrats said they were looking at ways to ensure the legality of the unusual parliamentary procedure that supporters hoped would break a budget impasse over the program.

"I think this is a unique solution for a unique challenge that we face," Hutchinson told members of the Legislative Black Caucus.

A Medicaid budget bill funding the expansion has fallen short of the three-fourths vote needed in the Senate for approval. The backup plan calls for adding a provision to the Medicaid budget that would defund the hybrid expansion, which uses federal funds to purchase private funds for low-income residents. If the Legislature approves the revised budget measure, Hutchinson has promised to veto the defunding provision. That would allow the Legislature to effectively fund the program by upholding the governor's veto, which requires a simple majority.

The Legislature is set to reconvene Tuesday after lawmakers deadlocked last week over efforts to resolve the budget standoff. Hutchinson told the caucus that three of the 10 Senate Republicans opposed to the expansions have told him they'll vote for the Medicaid budget with the defunding provision, despite Hutchinson's promise to reinstate the funding. Nearly all Democrats in the Legislature would need to support the Medicaid budget with the defunding provision for the proposal to reach Hutchinson's desk.