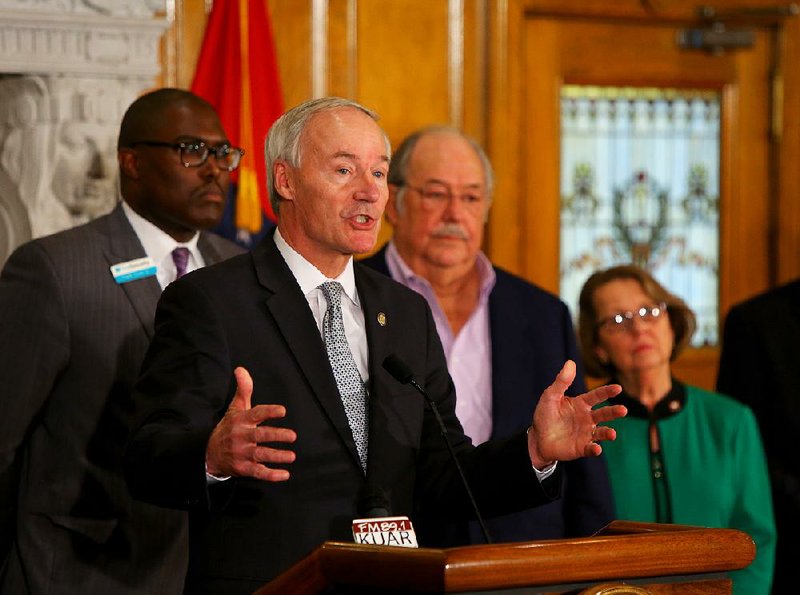 Gov. Asa Hutchinson said Monday that three of the 10 Senate Republicans who voted last week against legislation to fund Arkansas' Medicaid expansion have committed to vote for the bill with an amendment that would block spending on the expansion -- even though they know he'll veto the amendment.

This is the calendar of public events of the 90th General Assembly for today, the seventh day of the 2016 fiscal session.

The Republican governor also told the Legislative Black Caucus' members that if they vote for the amended bill and their position is misrepresented as being against funding the Medicaid expansion, "I am happy to make sure that I'm a voice for an accurate record on your intentions and your consistency in support of Medicaid expansion in Arkansas, and being an advocate for that for your constituents."

Several Democratic lawmakers said Monday that they are warming to Hutchinson's line-item veto strategy for continuing funding of Arkansas' version of Medicaid expansion in the fiscal year starting July 1.

Hutchinson wants the Joint Budget Committee to amend the state Department of Human Services' Medical Services Division appropriation, which includes spending authority for the Medicaid expansion, to bar spending on the program. He has promised to issue a line-item veto of that ban if the Legislature sends it to his desk.

The appropriation is Senate Bill 121, which would grant the Medical Services Division $8.4 billion in spending authority, including $1.7 billion for the Medicaid expansion, during fiscal 2017.

The committee on Thursday balked at approving that amendment, with most Republicans voting for it and Democrats largely voting against it. That came shortly after the bill fell two votes short of the 27 required for approval in the 35-member Senate, when 10 Republican senators voted against it. Hutchinson's nephew, Senate Republican leader Jim Hendren of Sulphur Springs, proposed the amendment.

The Medicaid expansion, enacted by the Legislature in 2013, extended coverage to adults with incomes of up to 138 percent of the poverty level: $16,394 for an individual, for instance, or $33,534 for a family of four. Most of the 267,000 enrollees receive the coverage through the private option, which uses Medicaid funds to buy private insurance coverage.

Legislation enacted in the special session earlier this month would make changes in the program that Hutchinson has said would encourage enrollees to stay employed and take responsibility for their health care.

The program has been fully funded by the federal government. The state will begin paying 5 percent of the cost starting Jan. 1 and its share will gradually increase to 10 percent by 2020. The state funds to match the federal funds will be $43 million in fiscal 2017, a state spokesman has said.

During Monday's Legislative Black Caucus meeting, Sen. Joyce Elliott, D-Little Rock, asked Hutchinson how many of the 10 Senate Republicans who voted against SB121 have agreed to vote for the appropriation if it's amended to ban funding for the Medicaid expansion, knowing that Hutchinson would veto the ban.

"If the governor chooses to veto it, that's his prerogative and that's on him," Irvin said.

But Hester said that if the Democrats in the Legislature refuse to go along with Hutchinson's line-item veto strategy to continue funding for Arkansas Works, "it will be a whole new world.

"It will give me a lot more traction if the Democrats refuse to do it," he said.

During the Legislative Black Caucus meeting, Sen. Linda Chesterfield, D-Little Rock, wondered whether Hutchinson's commitment to issue a line-item veto of the Medicaid expansion funding prohibition is binding on Republican Lt. Gov. Tim Griffin "if something, God forbid, should happen to you?"

"Once that veto is in place, then that is the action of the governor that couldn't be changed by a subsequent governor," he said. He said Griffin was aware of his plans.

When asked the question that Chesterfield posed, Griffin, in a written statement, said, "The governor is in excellent health, and I am not going to engage in hypotheticals that assume the opposite."

When asked whether he opposes the Arkansas Works program, Griffin said: "For years, including as a member of the U.S. House Ways and Means Committee, I have consistently opposed Obamacare and have expressed my concerns over state and federal programs driving the federal debt, and the unsustainability of these programs in the absence of bold, comprehensive reform. My concerns remain."

During the Legislative Black Caucus meeting, Elliott told Hutchinson that "we appreciate your at least attempting to be creative to resolve an issue" with his line-item veto strategy.

Then, she asked whether the strategy would be used in the future.

Hutchinson said he's doubtful this strategy would be used again down the road.

"I think we understand that this is a unique time and moment in history, and we are looking for a solution to accomplish the objectives of the majority," he said. "I think this is a unique solution for a unique challenge that we face."

Article 6, Section 17, of the state constitution says: "The Governor shall have power to disapprove any item, or items, of any bill making appropriation of money, embracing distinct items; and the part or parts of the bill approved shall be the law; and the item or items of appropriations disapproved, shall be void unless repassed according to the rules and limitations prescribed for the passage of other bills over the executive veto."

Gillam said, "So far, it has been a pretty consistent analysis by the individuals that we have all visited with in the legal profession that this will hold up and it is legal.

"It may not be something that there is a lot of precedent for, but that doesn't mean that just because there is no precedent that it's not legal."

After the Legislative Black Caucus meeting, state Rep. Clarke Tucker, D-Little Rock, who is an attorney, said he's exploring tweaking the governor's proposal to address legal concerns of some lawmakers.

"We are just trying to work through this in a way that eases everybody's concern and make sure that, if we do go this route, that we are not stuck with a cliff, where providers and recipients are stuck without coverage," House Democratic leader Michael John Gray of Augusta said.