It's 'Death Down Under' on River Monsters 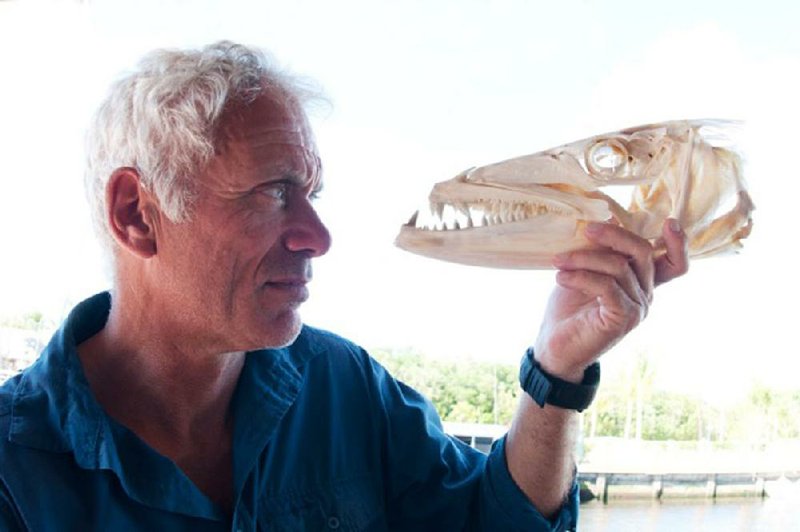 Animal Planet’s extreme angler Jeremy Wade has spent three decades traveling the world’s waterways in search of man-eaters that lurk beneath the surface of rivers and lakes.

Sometimes, when there's nothing else on TV, I enjoy watching programs where crazy people do crazy things.

That still does not include the Kardashians. I have my limits.

I do include in that group Jeremy Wade, Animal Planet's resident biologist and "extreme angler," who goes out (on purpose) and looks for nasty toothy things in his series River Monsters.

Any normal, sane person should have a healthy fear of what lurks in the murky depths, but not the 60-year-old Brit. He takes delight in, as Animal Planet puts it, "traveling the world's waterways in search of man-eaters beneath the surface of rivers and lakes in some of the most inhospitable locations in the world."

Maybe we watch Animal Planet's top-ranked series to get vicarious thrills through Wade's adventures, but for Season 8, he expands our horizons to include "a realm that is totally unknown to him and River Monsters viewers -- the vastness of the planet's oceans."

River Monsters debuts Season 8 at 7 p.m. today with an episode titled "Death Down Under." The new season will deal entirely with fishy legends and myths that dwell in the briny depths.

In tonight's episode, Wade searches for a legend in northern Australia. It seems six men have disappeared in these waters and Wade dives in to find a culprit.

In the famous words of Marlin Perkins, "I'll keep watch from the Jeep while Jim goes down to the waterhole to investigate."

That's followed at 8 with the episode "Razorhead." In this one, Wade investigates a critter terrorizing the Florida Keys that is so violent it slices through flesh and breaks bones.

Both episodes are rated TV-PG, so unless you want your small fry to have nightmares about the ocean, keep them in the other room.

• Alone. Here's another program where crazy people do crazy things.

Alone kicks off Season 2 at 8 p.m. today on History Channel. This series at least is rated TV-14 -- not for monster fish or breaking bones, but for language. Evidently when you're alone in the dark in the wilderness, language can get a bit salty.

In the episode, "Once More Unto the Breach," it's Day 1 and 10 intrepid souls are all set to venture into Canada's Vancouver Island wilderness alone.

By alone, I mean all alone. No camera crew, no producer, no support person is out there with them. They shoot their own videos and are responsible for their own survival using only 10 items they have stuffed into a small backpack.

What? Camping out? How tough is that? You may scoff at how psychologically difficult being alone is, but I've experienced it in the deep, dark wilderness of DeGray Lake when I was the only one at a deserted campground.

When you're alone in a tent, all those normal night sounds get magnified and your imagination plays tricks on you.

One night I was certain a vicious, snarling black bear was stomping and snorting its way toward me. It turned out to be an armadillo. But, hey, it was a huge armadillo and I was all alone.

Imagine now that DeGray is the Canadian boonies where there are bears in the woods (we see them on a video) and wolves. History Channel tells us that "when the survivalists confront rocky terrain, wet environments, and hungry predators, all of them begin to question their resolve."

But there is a nice incentive to tough it out. A cool $500,000 is awarded to the contestant who lasts the longest. If you think that sounds like easy money, you're wrong.

History Channel producers boast that Alone is "the boldest and longest survival experiment on TV -- the most terrifying series on television." Last season saw the first contestant freak out and cave in fairly early when he realized that he'd bitten off more than he could chew. It looked like fun and games on paper, but reality proved something else entirely.

• Vikings, 9 p.m. today on History Channel. In "The Last Ship," it's the Vikes vs. the French. That means it's Ragnar vs. his brother Rollo. This can't end well.

• Last Man Standing, 7 p.m. Friday on ABC. No word yet on a sixth season for Tim Allen and company.

Print Headline: It's 'Death Down Under' on River Monsters