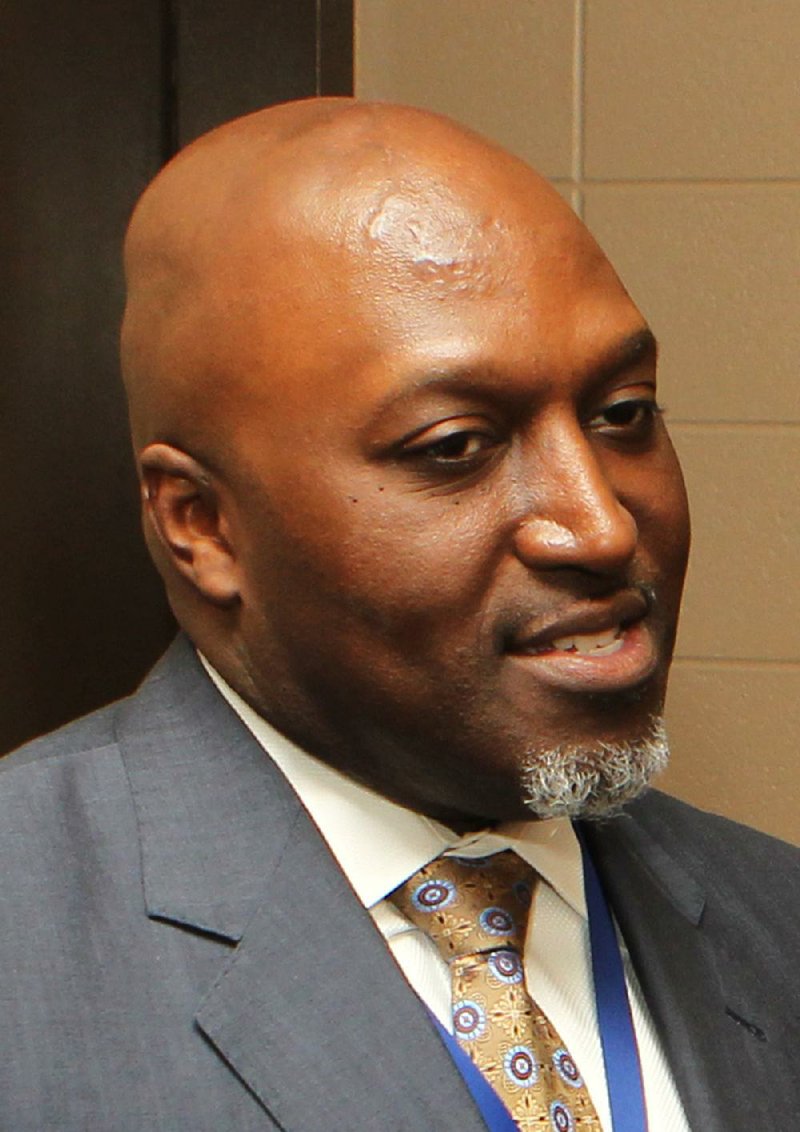 Marcus Devine, director of the Arkansas Division of Youth Services and chairman of the Youth Justice Reform Board is shown in this photo.

Devine's tenure was about as long as that of former director Tracy Steele, who resigned in October 2014 after being hired in August 2013.

"I have appreciated the opportunity to lead this division and am saddened to leave but it is apparent that my business affairs warrant my attention," the letter states.

In addition to directing the Youth Services Division, Devine has been president of Adevco Management LLC in Little Rock. He did not return a message left for him there Thursday afternoon.

"He said he had some private-sector issues to deal with," department spokesman Amy Webb said. "We appreciate his work here at the department."

Webb said the resignation was not expected.

Devine's resignation came two days after a Youth Justice Reform Board meeting in which Faulkner County Circuit Judge Troy Braswell chided Devine for comments he made at a March hearing of the state Senate Committee on Children and Youth.

Devine had said the number of children entering the juvenile-justice system should be limited to "felony youth, youth that have committed violent acts."

On Monday, after Braswell called the comments "reckless dialogue," Devine backpedaled on his comments, saying his assertion that only felony offenders should get locked up in juvenile jails is "too bright of a line" to draw and acknowledging that some misdemeanor offenses require incarceration.

Hundreds of children who are truants, hard to control, or runaways end up in the same juvenile-offender lockups as youths who have committed felonies such as rape or murder, a December Arkansas Democrat-Gazette investigation found.

Braswell said Thursday that he had no idea if their discussion Monday had any bearing on Devine's resignation. He said he disagreed with Devine's earlier statements because they undermined the risk-assessment tool that judges plan to implement to determine punishments on a case-by-case basis.

Braswell said he hasn't spoken to Devine since Monday, which was the first conversation he'd had with him in "quite some time." He learned of Devine's departure Wednesday afternoon when he received a request to excuse Devine from court in a case in Garland County because of his resignation.

Braswell said he didn't anticipate Devine's departure would cause any disruption with the Youth Justice Reform Board, which was formed in August to improve the state's juvenile-justice system overseen by the Youth Services Division.

Paul Kelly, a member of the board and senior policy analyst at Arkansas Advocates for Children and Families, said he agreed.

"This is a system that is in the news too much, but we just have to do something," Kelly said. "I don't think his departure is going to cut the momentum because the folks around there and the reason for doing this is something that's been going on for multiple years through several administrators."

In 2013, the division experienced a sharp increase in assaults reported at the Arkansas Juvenile Assessment and Treatment Center near Alexander that prompted a Disability Rights Center of Arkansas report that found staff members had offered rewards to youths to assault their peers.

In 2015, the division stopped sending youths to two county-operated detention centers because of how staff members were treating them.

The division stopped placing youths at the Yell County Juvenile Detention Center in Danville in response to an Arkansas Democrat-Gazette investigation that found that the lockup's employees and law enforcement officers routinely punished youths by using a mechanical restraint chair, an immobilization device known as The Wrap and pepper spray. The lockup reopened in the spring of last year after Yell County Sheriff Bill Gilkey led an overhaul.

Kelly, an advocate for incarcerating fewer youths, said it was unfortunate to see more turnover in the division's director position.

"I think it is sad that we've had such turnover in the [Youth Services Division] positions, and that we really need to have someone who has a lot of background in juvenile justice who understands the issue, who won't come into it learning," Kelly said.

Braswell said he had confidence in Smith to serve as interim director and in Gov. Asa Hutchinson and Human Services Director Cindy Gillespie to select a new agency director.

"I can say that I hope the next director has a breadth of knowledge and understanding of the systemic problems facing [the division] and the courage and leadership ability to make a positive impact on the agency," said Dorcy Corbin, a public defender who has defended children accused of crimes for more than a decade. "The children who are in the system deserve every able-bodied person to help them become productive members of society."

The division's director oversees the state's residential facilities that house about 500 youths subject to court-ordered treatment as well as community-based programs for hundreds more juvenile delinquents across the state. The division contracts with outside companies for the majority of its services.