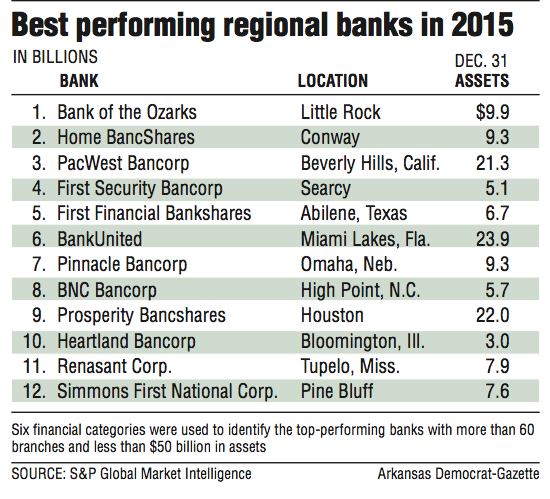 Information about the best performing regional banks in 2015.

Home BancShares will make a 2-for-1 stock split on June 8, the Conway bank's chairman, John Allison, said Thursday at its annual meeting in North Little Rock.

Home BancShares has doubled its earnings since the 2013 split, Allison said.

"So we think it's time again to split the stock," Allison said to applause and cheers from stockholders.

As stocks appreciate in value, it gets to a certain level where some investors think it's too expensive, said Randy Dennis, president of DD&F Consulting Group, a bank consulting firm in Little Rock.

Home BancShares closed at $43.46 Friday, up 96 cents in trading on the Nasdaq exchange.

When a company splits its stock, it increases the number of shares and it usually increases the trading on the stock, Dennis said in a telephone interview.

"It's usually viewed as a positive thing," Dennis said. "I think it's good corporate planning, once a stock gets at a certain price, to split it, especially if you have a good volume in your shares."

Home BancShares is also adding former Arkansas Gov. Mike Beebe to its board of directors, Allison said at the meeting at the Riverfront Wyndham in North Little Rock.

Beebe and Allison are both graduates of Arkansas State University.

"He's a lawyer, he was attorney general, he was a senator, he was governor," Allison said, listing Beebe's qualifications.

Beebe, who also serves on the board of Tyson Foods, will make a good addition to the board, Dennis said.

"First off, there is a friendship there, with both going to ASU," Dennis said. "But above and beyond that, I think Gov. Beebe showed himself as a good businessman and a good politician. He's nationally recognized, too, and has a lot of contacts across the country. He expands their presence."

At the meeting, Allison also referred to a recent Standard & Poor's ranking of regional banks that indicated four of the top 15 regional banks in the country are Arkansas based. The ranking was published by SNL Financial of Charlottesville, Va.

The ranking by S&P Global Market Intelligence listed Bank of the Ozarks of Little Rock as the top performing regional bank in the country, followed by Home BancShares at No. 2 and First Security Bancorp of Searcy at No. 4. Simmons First National Corp. of Pine Bluff was listed as the No. 12 bank in the country.

Six financial categories were used to identify the top-performing banks that have more than 60 branches and less than $50 billion in assets. The categories included loan growth rate, losses as a percentage of loans and the Texas ratio, a projection of the likelihood a bank will fail.

It was the second year in a row that Bank of the Ozarks was ranked No. 1. Home BancShares moved up one spot from third last year to second this year.

It's impressive to think that four of the top 12 banks in the country are based in the state, Allison said.

Arkansas had more banks on the list than any other state.

"For a number of years, I've said that Arkansas has a lot of really good banks and great bankers," Dennis said. "In a rapidly changing environment, they have been opportunistic and have chosen wisely [in acquisitions]. And their earnings and their stock price reflect that."

With Home BancShares doing so well, Allison was asked if there is a point in time where the bank may be sold instead of being the buyer.

Nothing is forever, Dennis said.

"[Home BancShares] is extremely well run," Dennis said. "They provide an outstanding return to the shareholders. Right now, it would be hard to find anybody performing better than it is. Most well-run banks are always open to all solutions."

Home BancShares and Bank of the Ozarks have done a great job of preparing the next generation to run the banks, Dennis said.

"They've got young bankers in there," Dennis said. "The succession plan is set. So they can go into the next generation and continue to build value."