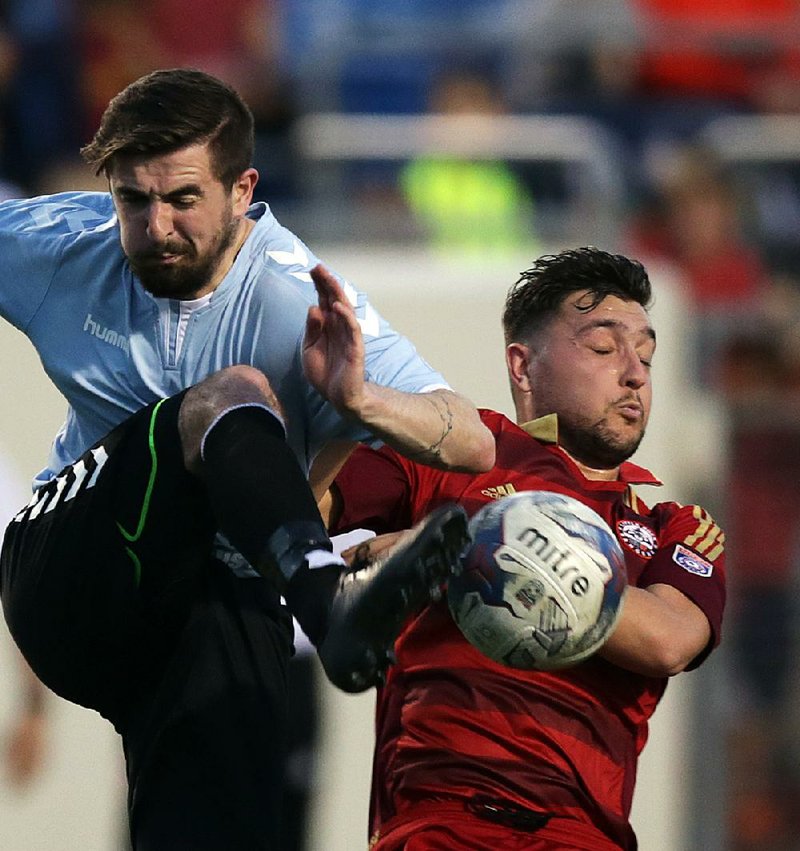 TJ Rodriguez made sure the Little Rock Rangers' first ever match ended with a victory Friday night.

Rodriguez scored on a penalty kick in the 85th minute, and the Little Rock Rangers held on to defeat Memphis City FC 2-1 in front of an estimated crowd of 2,000 at War Memorial Stadium in Little Rock.

"That's what we wanted," Rangers Coach Michael Surtees said of his team's victory and the crowd.

With the match tied at 1-1 in the second half, Rodriguez, a midfielder, went left on the penalty kick and knocked it in past Memphis goal keeper Britt McGuire. After the goal, Rodriguez ran over to the Rangers' bench and danced with his teammates.

The game-winning goal capped an evening that featured a festive pregame atmosphere that began with the Rangers walking onto the field to an instrumental version of Prince's 1984 hit "When Doves Cry".

But there were no tears at War Memorial Stadium on Friday night. Instead, enthusiasm was showcased by one fan dressed up as the Red Ranger from the 1990s TV show Mighty Morphin Power Rangers. Chants of "Let's Go Rangers" rung through the west stands to combat the numerous drumbeats of the Memphis City FC fans who traveled from western Tennessee.

For Rodriguez, 26, a 2008 graduate of Van Buren High School and former player at Central Baptist College in Conway, it was fun to play at the Little Rock home of the Arkansas Razorbacks football team.

"The energy tonight was absolutely tremendous," Rodriguez said. "Fans knew our names. There were several fan groups. That was awesome to see."

On the field, the Rangers gave the crowd something to cheer about early in Friday's match.

The Rangers took a 1-0 lead in the 12th minute on defender Ferdinand Matebu's goal, which trickled in past McGuire. Matebu had a goal in the 11th minute waved off because of an offside call.

Little Rock led 1-0 at halftime, but Memphis tied the match at 1-1 in the 63rd minute as Blake Lashlee got one past Rangers goal keeper Bryce Deaton.

The Rangers are an expansion team in the National Premier Soccer League, considered the fourth tier of the U.S. soccer pyramid behind Major League Soccer, North American Soccer League and the United Soccer League. Friday's match was the first of two friendlies with Memphis as part of the "I-40 Cup." Little Rock begins its South Central Conference season April 30 at Dallas City FC.

Surtees said although his team needs to be more organized defensively, he was pleased with its performance.

"We learned a lot. We know what we need to fix," Surtees said. "These players will play with all the heart they possibly have. The crowd loves this team."

The crowd Friday night impressed Surtees, and he believes better things will come for the franchise.

"If we can get 5,000 into the stands, the atmosphere will be incredible," Surtees said. "I think if this is how we start with a friendly, and we've still got high school going on right now and a lot of sports going on, the sky's the limit."