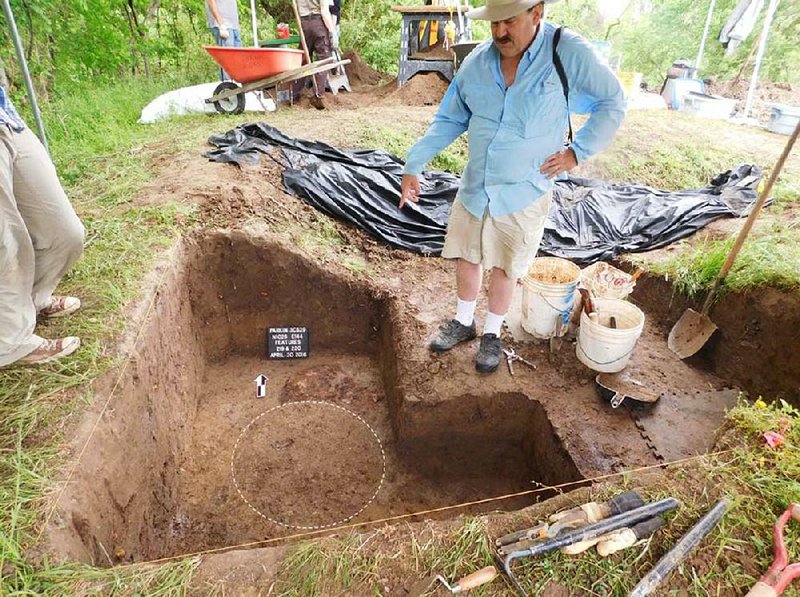 Site archaeologist Jeffery Mitchem of the Arkansas Archeological Survey points to the pattern of a posthole at the spot in Parkin Archeological State Park where a team found a large wooden post in 1966. (Special to the Democrat-Gazette / JESSICA CRAWFORD )

Archaeologists unearthed what they believe are remains of a large wooden Christian cross Spanish explorer Hernando de Soto placed atop a hill in 1541 at what is now part of Parkin Archeological State Park in Cross County. 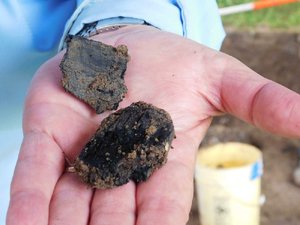 Photo by JESSICA CRAWFORD / Special to the Democrat-Gazette
Archaeologist Jeffery Mitchem holds baldcypress fragments that researchers believe are from the cross.

J̶e̶f̶f̶e̶r̶y̶ Jeffrey Mitchem*, the Parkin park site archaeologist for the Arkansas Archeological Survey, said he will send a 2-foot chunk of baldcypress thought to have been used for the cross more than 500 years ago to the University of Arkansas at Fayetteville next week for further testing.

Archaeologists first found a large wooden post at the site in 1966 while covering holes left by looters and surmised it could be de Soto's cross. Carbon-dating conducted then indicated the post was cut from a cypress tree between 1515 and 1663.

The holes were filled a̶n̶d̶ ̶w̶i̶t̶h̶i̶n̶ ̶a̶ ̶f̶e̶w̶ ̶y̶e̶a̶r̶s̶. In the 1900s to 1940s,* a lumber company built atop the land, preserving the site along the St. Francis River, Mitchem said.

"It's in the ballpark," he said of the carbon-dating results. "We want to do further testing to make sure."

Mitchem learned of the discovery of the potential cross in 1992 -- two years b̶e̶f̶o̶r̶e̶ after* he became the Parkin park's archaeologist -- and began his research, theorizing then that the wood was from de Soto's cross.

"It became my career," he said.

De Soto and his explorers, including several Catholic priests, landed in Florida in 1539 and forged across the southeastern United States seeking gold and other riches. He crossed the Mississippi River into Arkansas in June 1541 and traveled to Casqui, an Indian village named after its chief, which is now the site of the state park.

According to four accounts of the journey written by de Soto's voyagers, de Soto ordered several of his men to cut a tall cypress tree and build a massive cross. On July 4, 1541, about 100 men raised the cross, according to the written accounts.

The explorers only stayed in Casqui for two days before leaving. They returned again later that summer for another two days before heading to southeastern Arkansas. De Soto died in May 1542.

The Parkin artifact may be one of only two crosses de Soto placed while in the United States, said Patricia Galloway, a professor of the School of Information at the University of Texas at Austin, who has studied de Soto's U.S. exploration.

"He may have placed it to impress the natives, but he was traveling with several priests and most of the places he stopped were not friendly," she said. "This [Casqui] may have been one of the few safe spots."

Mitchem said that the Arkansas site may have been one of only a few places de Soto and his men could "relax" and not battle tribes.

Galloway said she was sure de Soto did not convert the Indians there to Christianity, but the natives may have accepted the cross because de Soto's men helped Casqui and his village overcome a warring tribe.

"They would be perfectly happy if he left it there," Galloway said. "It may have been a sign of victory. A sign of the village was not to be messed with."

Mitchem conducted several excavations at Parkin, but none on the largest mound where evidence showed the Casqui chief built his home. Last year, the Archaeological Conservancy, a nonprofit organization in New Mexico that acquires and preserves significant archaeological sites, found a New York foundation to help fund Mitchem's research.

"I told them it was a gamble," Mitchem said. "I said that, so far, everything points the right way and it's a good chance it's de Soto's cross, but we needed more research."

On Monday, Mitchem and his team began work. Survey archaeologist Tim Mulvilhill located the cross's spot, which was marked by UA archaeologists in 1966.

The team then found a section of wooden post Tuesday buried about 2 feet into the soil atop the park's largest mound. Much of the wood was rotted or burned.

A portion of the post was still wrapped in plastic covering, left by archaeologists 50 years ago.

A day later, after clearing the wooden post, Mitchem and his team found the outline of a large posthole about 35 inches in diameter. They also found that the pit reached more than 5 feet below the surface -- another indication that it was the mounting for the cross. Mitchem also found several Indian pot shards.

"The best indication we could have is if the carbon-14 testing says it's from 1541," he said. "But that wood may not be enough to tell.

"Everything about it, though, indicates it is his cross," Mitchem said. "The location, the baldcypress used and the Spanish artifacts we found there. Everything points to the fact that it is what we believe."

Mitchem said he will take the findings to David Stalhe, a tree-ring specialist at UA, on Monday to determine the post's age.

"To me, this is pretty incredible," Mitchem said. "I've been dreaming about doing this my whole career. This is probably related exactly to [de Soto's] expedition."

*CORRECTION: Jeffrey Mitchem’s first name was spelled incorrectly in this article about the discovery of what could be the remains of Spanish voyager Hernando de Soto’s cross at Parkin Archeological State Park. Mitchem began work at the park in 1990, and a lumber company was on the site from about 1900 to the 1940s. This story also incorrectly stated when Mitchem began working at the park and when the lumber company opened operations at the site.