Who ya gonna call? If the problem is swarming bees, keepers are at the ready 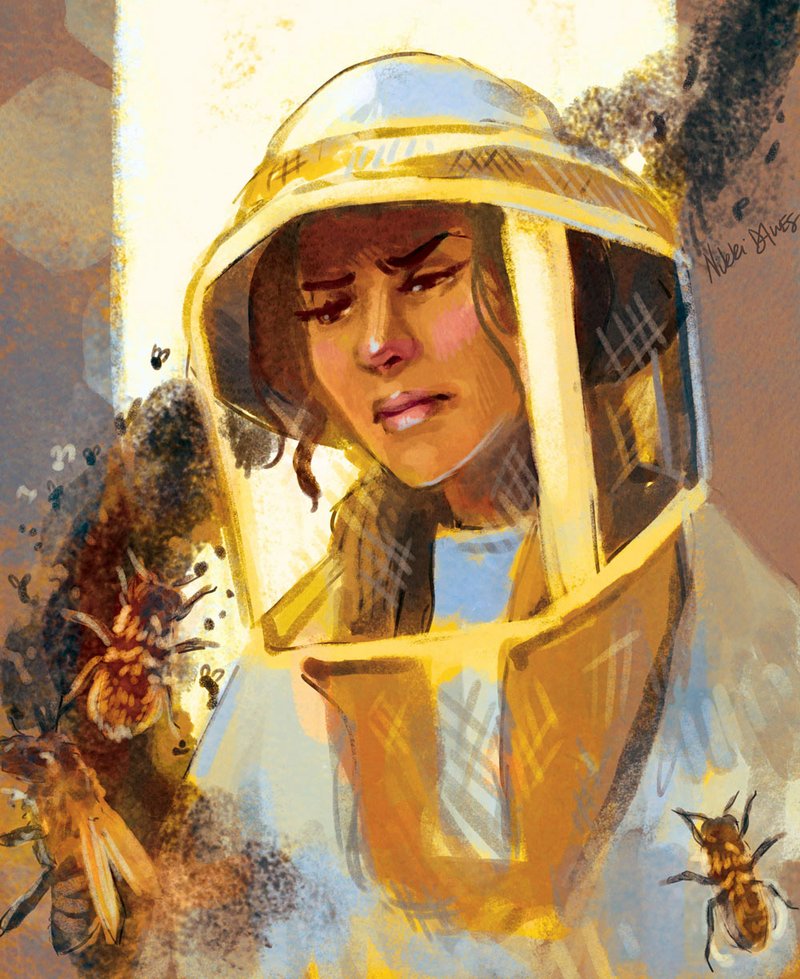 Richard Vardaman estimates he's been stung during his dozen years as a beekeeper, "oh, a couple of thousand times." 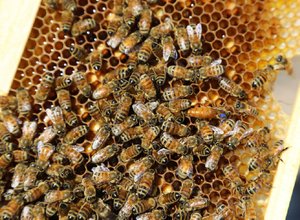 Photo by MARY HIGHTOWER / Special to the Democrat-Gazette
Where the queen goes, the hive follows. University of Arkansas Cooperative Extension Service researchers marked this research hive’s queen with a blue dot. 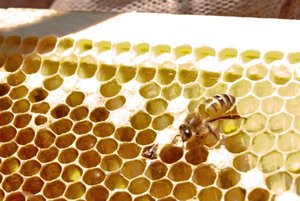 Photo by MARY HIGHTOWER / Special to the Democrat-Gazette
A honeybee emerges from the cell in a University of Arkansas Cooperative Extension Service research hive where it developed after being laid by the hive’s queen. 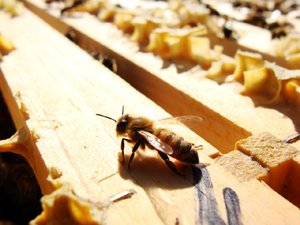 Photo by MARY HIGHTOWER / Special to the Democrat-Gazette
A single honeybee rests atop a University of Arkansas Cooperative Extension Service research hive in Pettus.

Such is the life of a man who answers the phone, "This is Rick Vardaman, The Bee Guy," and who serves as vice president of the White County Beekeepers Association, which meets every second Monday at the Downtown Church of Christ in Searcy.

And the number of stings swells this time of year for Vardaman, who has "somewhere around" 63 honeybee hives on his property. Spring is when he finds himself more often than usual on the wrong end of a honeybee as he is busy removing swarms clustered in tree limbs, wrapped around fence posts or even tucked into cars.

"I've probably gotten 35 or 40 calls since the second week of March," he says. "And it'll go on until June or so. But I've removed swarms the 12th day of December, too. Anytime that hive gets crowded, they'll swarm. Or if they get hive beetles

and they devastate the hive, the bees will leave and hunt a new home."

Vardaman is not alone in his work of removing swarms in the spring. Across Arkansas, honeybees -- the local version is the Western honeybee, also known as the European honeybee -- are emerging from winter into this warmer, sunnier season, rapidly growing their hives as more food is available, then splitting hives in two and reproducing the bee colony.

"The spring is absolutely the best time for swarms," says Jon Zawislak, an apiculture instructor with University of Arkansas Division of Agriculture's Cooperative Extension Service in Little Rock.

"With all the flowers in bloom there is plenty of food, and the population of bees really builds up fast in the hive. When they get crowded, half of them move out."

The mild winter and an early spring have caused an uptick in honeybee swarms, Zawislak says.

When the colony splits, the old queen departs with some bees, and the remaining bees raise a new queen in the old hive, Zawislak says.

"The old queen takes half the bees with her and they look for someplace to live," he says. "In nature that would be a hollow tree. In town a lot of times we cut down old trees that are hollow before they fall on houses, so there's not so much real estate out there in nature for the bees. Unfortunately, they often find hollow spaces inside walls."

But, Zawislak says, those swarms -- a buzzing, darting and scurrying, tightly wound ball of what looks like impending catastrophe -- don't actually present much danger.

"First of all, don't panic," he tells people faced with a swarm. "Bee swarms are really fairly gentle. They don't have anything to protect. They have no food. They don't have any little baby bees that they are looking out for. They are just in a temporary location, and if you leave them alone, in a couple of days they ought to be gone on their own."

They should be left alone unless the honeybees are in an impractical location for the homeowner, Zawislak says. Like gathering on a patio, inside a wall or a vehicle engine block.

If that's the case, call a local beekeeper, Zawislak says. The Arkansas Beekeepers Association lists people who are willing to remove swarms at arbeekeepers.org. Zawislak also says that local county extension offices should have such a list.

Vardaman and the other beekeepers of Arkansas embrace such calls, as they will eagerly gather up honeybee swarms to add to their bee yard.

Kevin Breedlove, a beekeeper in Cabot, says gathering swarms is a way to get free bees. Well, sometimes not so free.

"It's not as free as you think," he says. "There's a lot of work getting them out of houses."

Plus, there's that nasty business that bees -- though usually content to gather food and go home -- can be hostile, especially if antagonized.

"It depends on how it goes," Breedlove says. "Sometimes it goes good, and you don't ever get stung at all. Sometimes they eat you alive."

There's the cut-out method, which is just what it sounds like, Breedlove says.

The honeycomb containing the queen is cut out, placed in an empty hive box, and the bees transition over to the box where the queen is as the box is carried away.

A trap-out is used when the comb can't be reached (for instance, when it's behind a wall) and the bees have a main entrance. All the other entrances are blocked, and a funnel that only allows the bees to exit is placed over the only remaining entrance.

A new hive box is placed next to this entrance and the bees that can't get back into their comb start going into the new box. As the queen bee loses more and more bees, she'll crawl into the new box, too. Sometimes a queen is placed in the box ahead of time, to lure bees.

BE AND LET BEE

Whichever method is used, there's not too much to fear from swarms, says Steve Turner, who runs Honeyton Farms in Cabot along with co-founder Mark Daniel.

"Swarms are very docile," Turner says. "The thing is to just leave them. Don't mess with them, and they won't bother you. Call a local beekeeper to come get them. Don't spray them. Don't try to move them, and just let them be, and you won't hear anything out of them."

Turner estimates that most of the 60 hives at the farm, which was established in 2012, came from honeybee swarms in central Arkansas. These bees are what Turner calls "rescue bees."

The two beekeepers, who are joined by Turner's son Matthew Turner at the farm, began their business by rescuing swarms. Now they sell raw honey and beeswax beauty products.

Honeyton Farms doesn't charge to remove swarms, Steve Turner says. They are happy to take the honeybees for free. So happy, in fact, that they give clients a bottle of the farm's raw honey as a gift.

But before the bees are put to work cranking out more honey, beeswax and other bee-related products, they need to be "rescued," especially when their swarms collect where humans would rather they not.

Maria Castro was recently on the receiving end of an unwelcome honeybee swarm.

The bees decided that the space inside the walls of her west Little Rock home was a good spot for a new bee condominium. The bees just didn't check with Castro before setting up shop.

So what was Castro's options for these bee squatters? Nothing too harsh. No dousing with chemicals. She wanted a greener solution.

"I know we have a shortage of pollinators," she says, referring to the rapid decline in the nation's honeybee population called "colony collapse disorder."

"I really didn't want to kill them."

She contacted Breedlove, who set up a trap-out to remove the swarm safely.

And that's just what Vardaman wants people to do when they come upon a swarm of bees.

Call someone who will remove them and give the honeybees a new home.

"Save the honeybees," Vardaman says.

Print Headline: Who ya gonna call? If the problem is swarming bees, keepers are at the ready