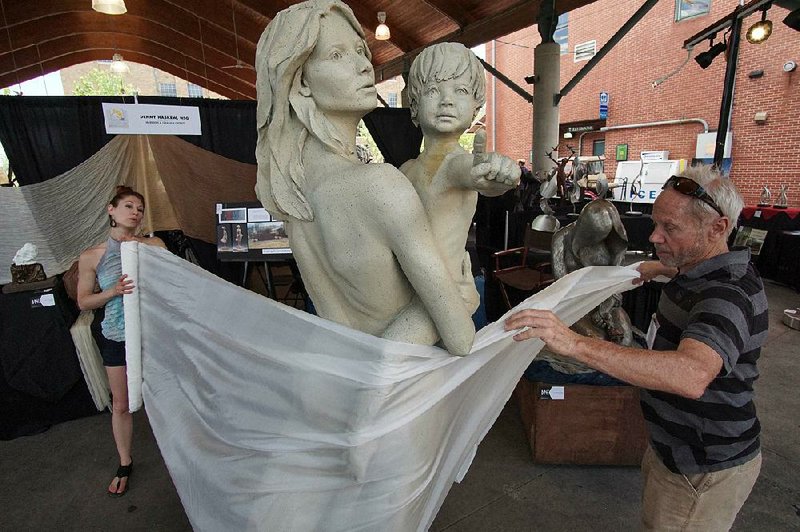 Abbie Powers (left), an installation and performance artist, and sculptor Denny Haskew, both of Loveland, Colo., experiment with wrapping silk around a piece Sunday during the Sculpture at the River Market Show and Sale in Little Rock.

Shifting the focus from the historical scar on Little Rock to the strides that have been made in the nearly 60 years since Central High School was integrated was the goal of this year's winner of the 2016 Sculpture at the River Market competition. 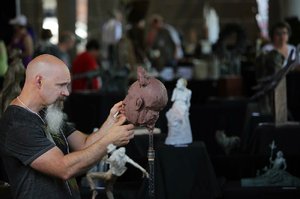 Photo by MITCHELL PE MASILUN / Arkansas Democrat-Gazette
Sculptor Craig Campbell of Wichita, Kan., works on a community art piece Sunday during the Sculpture at the River Market Show and Sale in Little Rock.

Clay Enoch of Colorado Springs, Colo., was named Sunday as the recipient of an $80,000 commission for his proposed piece called United.

The sculpture, which will be 10 feet, 2 inches tall and 6 feet wide, will be installed in 2017 on the grounds of Central High School to commemorate the 60th anniversary of the desegregation crisis.

The state gained national attention when on Sept. 4, 1957, nine black students attempted to enter the high school but were turned away by the Arkansas National Guard and an angry mob. On Sept. 25, 1957, U.S. Army troops, under orders from President Dwight Eisenhower, escorted the "Little Rock Nine" through the mobs and into the high school, officially ending segregation for the state.

Enoch's piece, which he will compose from silicon bronze and structural stainless steel, depicts two figures working together to connect two circles.

"The thing that struck me is the history is kind of ugly," Enoch said. "I wanted to try to shift the focus from the historical to the contemporary. There has just been so much progress made. I wanted to create something that showed the strides that have been made -- something hopeful and uplifting."

Enoch and two other finalists -- Kathleen Caricof and Denny Haskew, both of Colorado -- were selected from 28 submissions.

"This is cliche, but you'd like to be able to give all three of them the commission to do all three pieces because they were all three superb in every way," said Dean Kumpuris, the founder of Sculpture at the River Market and a member of the Little Rock Board of Directors.

Little Rock Central Principal Nancy Rousseau said she was thrilled about the commissioned piece and is eager to have it installed.

"There were so many good pieces," she said. "They're all timeless. All had great concepts."

Joseph Wright, a Central High senior, said the many sculptures to commemorate the desegregation crisis were inspiring to him not only as a black student at the school, but also as an aspiring artist.

"The name United and the sculpture is very fitting," Wright said. "I've taken an art class at Central every year. Sculpting is a passion of mine."

Artist Longhua Xu of Hot Springs said the subject of the competition was especially meaningful to him as a 1989 immigrant from Shanghai.

One is a girl with a book held in the air, balanced on the tips of her fingers like a bird to illustrate the heights to which an education can take her.

The last is representative of Xu's daughter, Ann Xu, a 2010 graduate of the Arkansas School for Mathematics, Sciences and the Arts in Hot Springs whom Gov. Asa Hutchinson appointed to the school's Board of Visitors last year.

"As an Asian-American, I had to teach her that she needs to speak up, to have her voice heard," Longhua Xu said. "She wanted to be class president but said that you had to be popular, smart and white to get the spot. I told her to speak up. She became student body president. Now she's in medical school at Baylor."

More than 800 sculptures from 48 juried artists from around the nation were displayed at the River Market pavilions during the two-day show.

It was the ninth show organized by the Sculpture at the River Market committee, which commissions artwork and then donates it to the city to be placed in various locations around Little Rock.