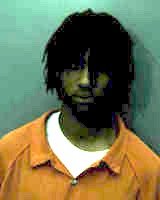 Beasley and former Pine Bluff basketball player Marquie Smith, both 18, Dontarrius Murry, 20, of Little Rock and Jamarea Wainwright, 18, of Pine Bluff were arrested in the early Saturday morning shooting of Tyron Walker, 21. The four appeared Monday in Pine Bluff District Court and face one count each of aggravated robbery and first-degree battery, both felonies.

Murry faces an additional count of being a felon in possession of a firearm, said Kyle Hunter, prosecuting attorney for the 11th Judicial Circuit-West, which includes Jefferson and Lincoln counties.

All are being held in lieu of $100,000 bond. Formal charges have yet to be filed, Hunter said.

Pine Bluff detective Mike Sweeney said in a probable-cause affidavit that Walker was robbed of a backpack and shot outside a vehicle as he was talking to four men believed to be the suspects. The shooting occurred at a convenience store on University Avenue near the Cedar Cabin nightclub. After Walker was shot, witnesses said he ran toward University where he fell in the middle of the road, according to the affidavit.

The witnesses, who were with Walker, told police that they picked up Walker and took him to another nightclub, PJ's, where they knew they could find police.

Beasley, Smith, Murry and Wainwright were stopped by University of Arkansas at Pine Bluff police not far from the scene of the shooting. The affidavit said Beasley was driving with Wainwright in the passenger seat and Murry and Smith in the back.

Police found Walker's backpack at Murry's feet, according to the affidavit. It contained a handgun, money and what police believed to be marijuana. Sweeney said there were 15 calls between Walker and Wainwright between about 11:30 p.m. Friday and about 2:20 a.m. Saturday, which was about the time Walker was shot.

Walker's friend, Kiyon Johnson, told police that he "saw a scuffle involving Walker and heard Walker yell then he heard a gunshot," according to the affidavit. Walker described the shooter as a "tall, light-skinned black male with long dreads." He later picked Beasley from a photo lineup as being the man who shot him.

Beasley was a three-year starter at wide receiver and defensive back for Pine Bluff High School and signed in February to play football at Louisiana Tech University in Ruston, La.

"We are aware of the situation and allegations revolving around one of our spring signees, and we are looking into the matter further," Malcolm Butler, associate athletic director of media relations, said Monday.

Beasley helped lead the Zebras to consecutive Class 6A football state championships in 2014 and 2015 and was part of the team's Class 6A runner-up team in 2013.

Last season he had 29 tackles, broke up 25 passes and recovered one fumble on defense and scored 17 touchdowns as a wide receiver. He was named to the Arkansas Democrat-Gazette's All-Arkansas Preps' first team as a defensive back.

Bobby Bolding, Pine Bluff High School's football coach and athletic director, was in court Monday to support Beasley. Bolding said he has not had contact with Beasley but that he had talked several times with Beasley's mother.

"What I'm concerned with right now is that it's one of my boys, and [I'm] trying to help him get through this tough time right now that he has managed to get into," Bolding said.

"All I can do is just be there for him and be somebody that he can talk to. That's about it," Bolding continued. "What's happened has happened, and it's very regretful. I don't know his involvement or details of any of the stuff. All I know is it's like having a child, and [when] one of your children is in trouble, you're not condoning it, what they did, but you want to be there to help them."

Smith did not play basketball this year, Bolding said.

Beasley, Smith, Murry and Wainwright are due back in District Court June 13. If formal charges are filed, the case would be moved to Circuit Court, Hunter said.

Information for this article was contributed by Jeremy Muck of the Arkansas Democrat-Gazette.