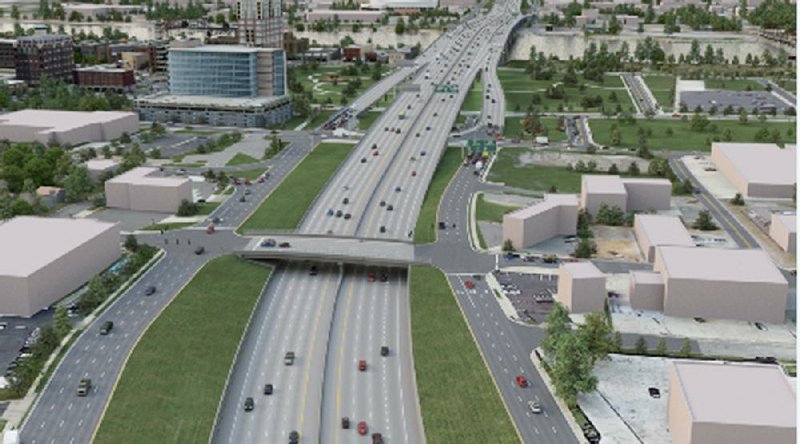 This three-dimensional rendering shows one of two alternative plans for renovating the Interstate 30 corridor through downtown Little Rock and North Little Rock. This six-lane alternate with collector/distributor lanes, eliminates the Arkansas 10 interchange and creates a new interchange between East Fourth and East Ninth streets.

The Arkansas Highway and Transportation Department on Tuesday released animated, 3D videos to depict what could be in the future for the Interstate 30 corridor.

Videos were made available ahead of the sixth public input meeting Tuesday as part of ongoing reconfiguration plans for I-30 through downtown Little Rock and North Little Rock.

The project, which is estimated to cost $631.7 million, includes four alternatives: two versions of a "6-lane with collector/distributor lanes" option and two featuring an eight-lane alternative, the Arkansas Democrat-Gazette previously reported.

The "6-lane with collector/distributor lanes" options alter interchanges — one replacing a current interchange with Arkansas 10/Cantrell Road and the other creating a new split-diamond interchange between East Fourth and East Ninth streets.

Noel Oman of the Arkansas Democrat-Gazette contributed to this report.