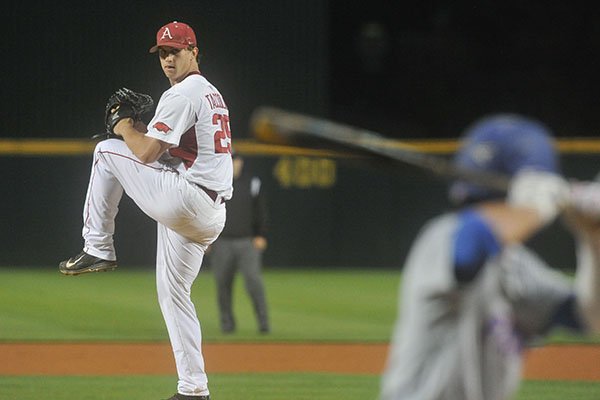 Arkansas pitcher Dominic Taccolini winds up during a game against Florida on Thursday, April 14, 2016, at Baum Stadium in Fayetteville.

FAYETTEVILLE -- Motorists ambushed in speed traps aren't the only ones detesting radar guns. Some college baseball coaches loathe them, too.

Dave Van Horn likely is among those who loathe the contraptions, although his stadium has its own radar gun.

Baum Stadium, where Van Horn's Arkansas Razorbacks play, is among what is becoming a majority of ballparks posting each pitch's speed on the scoreboard.

But those posted 90-plus mph pitches attracting fans' attention can distract some pitchers from what they do best.

Because what some pitchers do best isn't necessarily throwing hard. Actually, it is quite the opposite.

Coming off a 2015 season ended by blood clots that required surgery, Taccolini entered his junior draft eligible year likely craving to prove to the scouts and himself that he's fit and busting fastballs 90-plus.

Plus the more a pitcher struggles, the tendency is to try too hard, which customarily translates into trying to throw too hard.

In the SEC, "struggling" may have been to kind to describe Taccolini's pitching. He trailed 8-0 after two innings of his first SEC start.

His next three SEC starts lasted from one to three innings.

All of them Taccolini tried too hard to throw hard, Van Horn said.

Taccolini's bread-and-butter pitches sink. Overthrowing a sinker usually sinks a sinker-baller. It tends to stay up in the hitter's wheelhouse.

One start later, he shaved it to 4.50. Taccolini comes into Friday night's SEC start at Baum Stadium against Texas A&M as the SEC's Co-Pitcher of the Week. He tossed a 10-inning shutout while striking out 10 and walking none in Thursday's 1-0 SEC victory over Kentucky in Lexington, Ky.

"He was not overthrowing," Van Horn said. "He was throwing the ball in the upper 80s instead of trying to throw the ball 92."

Couldn't they have told him all those games ago to ignore the radar gun?

"Yeah, we've been telling him that," Van Horn said. "That was the first ballpark we've played in where you didn't have a radar popping up on a screen somewhere probably all year. But I don't think that had anything to do with it. I think he was just so frustrated by the way things have gone, he just said, 'Hey, I'm just going to take my time and not overthrow.' He wasn't throwing as hard as he can. He was letting it sink and it worked."

"He's capable of doing that every week," Pennell said. "When he stays calm and trusts his stuff, that's when he's at his best."

That's the Dominic Taccolini that the Razorbacks trust against the No. 2 Aggies on Friday night.