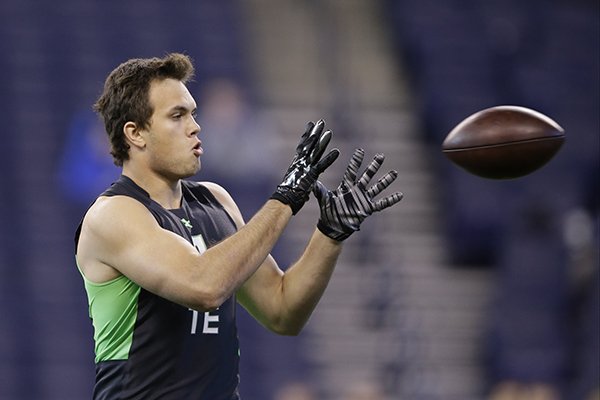 Now the Pulaski Academy graduate and early declarer for the NFL Draft is in position to improve his fortunes.

Highlights: Won Mackey Award as the top tight end in college football in 2015. Caught 51 passes for 739 yards and 3 touchdowns last season and triggered the Razorbacks’ 29-yard gain on a long lateral on a fourth-and-25 play, leading to a 53-52 overtime victory at No. 18 Ole Miss. Had 28 catches for 409 yards and 4 TDs as a freshman and 37 catches for 513 yards and 2 touchdowns as a sophomore.

NFL Draft outlook: Projected as the No. 1 tight end available in the NFL Draft

Henry is projected to be the first Arkansas player selected and is poised to be the first tight end off the board in the draft, which starts with the first round tonight at 7 in Chicago. Rounds two and three will take place Friday, and the final four rounds will be Saturday.

Henry, who will spend a low-key weekend watching the draft with his family, could be the first Arkansas player drafted first at his position since another Little Rock product, running back Darren McFadden, was chosen as the No. 4 pick by the Oakland Raiders in 2008.

"It'll be crazy, that's for sure," Henry said. "I'm definitely going to be a little nervous and excited and anxious, all in one. I'll be able to have all the people that I love around me and really enjoy it with my family and close friends."

Although almost every NFL Draft projection lists Henry as the top tight end available in the draft, where he is picked is subject to debate. Few mock drafts list him as a first-round pick, but Arkansas Coach Bret Bielema said he's fielded calls from NFL teams that have Henry in mind.

"I think they're all very intrigued," Bielema said. "I think it's going to be one of those where somebody really likes him and they're not saying anything. The majority of the teams [he's heard from] have been mid to late first-round guys, but all those teams that have an early pick in the second round, I think they're drooling a little bit to see if he'd still be there."

NFLDraftScout.com ranked Henry at No. 43 and the only Razorback among its top 100 prospects. NFL.com lists Henry as its top tight end with a 6.2 draft grade, which falls into its category of "Chance to become good NFL starter."

Bielema believes Henry has a higher ceiling, pointing out that the 6-5, 250-pounder did not drop a pass in 2015.

"His best football, it's not even close to being there yet," Bielema said. "He's only played true tight end like we play for three years."

ESPN's Mel Kiper Jr. said he saw Henry as a high school player in a 7-on-7 camp in Baltimore.

"I thought he'd be a little bit better blocker than he has been up to this point. He struggles mightily as a blocker, so he's a flex tight end, a move tight end. I think he's a second- or third-round pick, and probably more of a two."

Todd McShay of ESPN pointed out that a gradual de-emphasis of tight ends in college has affected the number of players at that position.

Wrote Dane Brugler of CBSSports.com: "Although he's not a reliable inline blocker at this point in his development, Henry has the best hands and route running athleticism of any tight end in this draft class, projecting as a Day Two 'F' or joker tight end prospect."

Henry signed with agent Jimmy Sexton and trained in San Diego for two months to prepare for the NFL combine. He did 13 reps with 225 pounds on the bench press at the combine, but he increased that to 21 reps at Arkansas' pro day March 16.

"It was a very positive day, and I'm excited about all the numbers I put up," Henry said that day. "I ran the 40 I wanted to and also increased my bench press by eight. I knew I could do it. Being able to do that in front of everybody was awesome."

Since then, Henry has worked out in Fayetteville and participated in a few private workouts with teams. He said he doesn't have a sense of which NFL team will call his name.

"None at all really," he said. "I don't really know. I can't narrow it down to three or four teams. It's pretty broad."

Henry is one of several Razorbacks projected to be taken in the draft or sign as free agents. The other prospects include quarterback Brandon Allen, running backs Alex Collins and Jonathan Williams, offensive linemen Denver Kirkland, Mitch Smothers and Sebastian Tretola, defensive linemen DeMarcus Hodge and Mitchell Loewen, and defensive backs Rohan Gaines and Davyon McKinney.

Arkansas ranks sixth in the SEC with 20 NFL Draft picks over the past five years, including five last year and four in both 2013 and 2014.

It also projected former Louisiana Tech running back Kenneth Dixon (Strong) to New England with pick No. 96 in the third round.