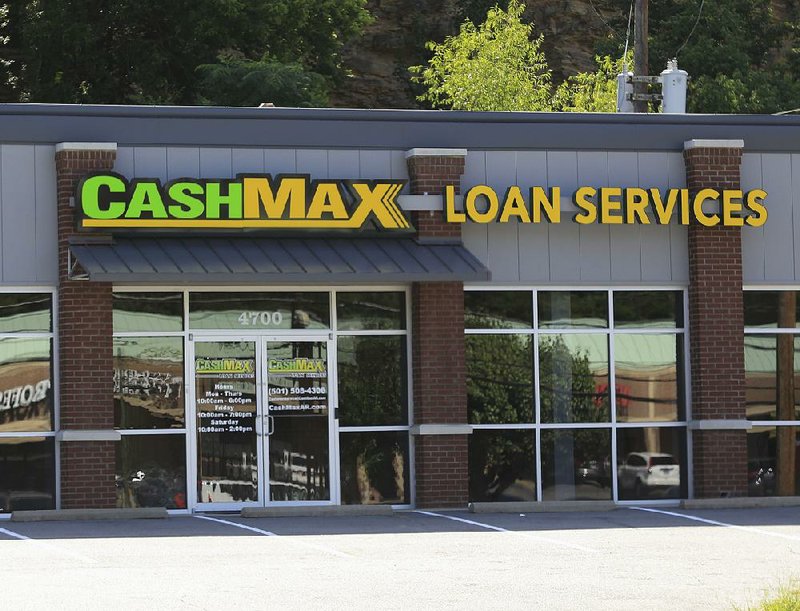 Seven years after the last payday lender closed its doors in Arkansas, a new sort of business that facilitates small, short-term loans has opened in North Little Rock, and its operation concerns the city attorney.

Cheney Pruett, chief executive of CashMax, said the business is a credit services organization that connects customers to third-party lenders and collects fees for its services.

North Little Rock City Attorney Jason Carter said CashMax is in violation of Amendment 89 to the Arkansas Constitution, which caps interest rates at 17 percent, and that the business lacks the appropriate license. No enforcement action has been issued yet on the business license, Carter said.

"This is shocking after the citizens of Arkansas voted to amend the constitution," Carter said in an interview. "I don't know how you think you can get around it."

Pruett counters that the fees do not count as interest under Arkansas law and, because the business does not lend money, he felt that the city-issued administrative office business license was appropriate.

"I believe there is confusion as to the service we actually provide," Pruett said.

Pruett has experience in the business of lending money. He was head of the Arkansas Financial Services Association, which represented payday lenders, and was chief executive of such a business called Cash Now. The association disbanded when a 2008 Arkansas Supreme Court decision and the efforts of the attorney general at the time, Dustin McDaniel, forced payday lenders to quit operating in the state.

Pruett also is a major financial backer of the proposed Arkansas Medical Marijuana Amendment, whose supporters have submitted petitions to the state to get it on the Nov. 8 general election ballot. He said he would be interested in entering the medical marijuana business.

"When that happened back in 2008, the ultimate losers were the citizens of Arkansas," Pruett said. "In the present environment, hardworking Arkansans who are underbanked or underserved have trouble gaining access to short-term credit."

He wants to open storefronts in other Arkansas cities, he said.

CashMax's website advertises the business as a solution for those with car-repair needs, unexpected cellphone bills, overdrafted bank accounts and emergency-room bills. Loans range from $300 to $1,000.

Loans, made by third-party lenders, do not exceed the 17 percent limit set in Amendment 89, Pruett said. That amendment was approved by voters in 2010. However, if a customer does not qualify for a loan, CashMax can act as a guarantor, and will back the loan if the client does not pay.

Altogether, the fees and interest equate to a 259.79 percent annual percentage rate, under the federal Truth in Lending Act, according to the CashMax website.

"Even though these are two independent transactions, two independent agreements -- we are required, the lender is required to display not only the interest they're charging, but all prepaid finance charges to the overall cost of credit," Pruett said. "The cost of credit does not always equate -- like in this case -- to interest on the loan."

Hank Klein, a North Little Rock resident, complained in June to the city and Arkansas Attorney General Leslie Rutledge's office about CashMax before the business opened. Klein is the former head of the group Arkansans Against Abusive Payday Lending, which disbanded after payday lenders left the state.

Carter then sent a letter dated June 29 cautioning Pruett that "the City of North Little Rock will take swift action against any person or entity who transacts loans in violation of Amendment 89." Carter said he has not had a response from Pruett.

Klein said he has not heard from the attorney general's office regarding whether it has any plans regarding CashMax.

"I'm not sure what's going on there," he said. "I've been told they're investigating it. Well, the city of North Little Rock investigated it and figured it all out by now. It doesn't take a whole lot of investigation to look at their website and figure out what they're doing."

Judd Deere, a spokesman for Rutledge, declined to comment on the status of Klein's complaint and the legality of CashMax.

Carter said either he or Rutledge could file a lawsuit against CashMax, but that sort of action would normally come from Rutledge's office. Carter said the first step in any potential legal challenge would be a complaint from an affected consumer.

In an interview, McDaniel said the 2008 Supreme Court ruling -- which stated that fees counted as interest -- was a necessary tool to boot payday lenders out of Arkansas.

"The Supreme Court said that all the fees and whatever else they call it -- rollover fees, refinance fees, interest fees -- were in fact the functional equivalent of interest and that it was a key part of their lending model," he said.

That made interest rates that were effectively higher than 17 percent unconstitutional, McDaniel said.

"The penalty was that they had to waive the [loan amount] and interest and fees and were subject to the Deceptive Trade Practices Act by the attorney general or privately," he said. "That was the sword by which we instructed all of the lenders in Arkansas and I will tell you they sent cadres of lawyers from all over the United States in to see us in the attorney general's office to offer every kind of explanation."

McDaniel said he did not believe he had encountered a credit service organization that connected customers to third-party lenders for a fee in Arkansas.

He said he could not comment on a particular legal matter, but "if the question is, has the Supreme Court ever said that you cannot disguise interest as fees, the answer to that is yes."

"I think they can operate and make loans every day of the week as long as they don't charge more than 17 percent including all the fees," Klein said. "I don't think there's any kind of loophole. It wasn't a loophole in 2008 when Cheney Pruett was required to close down his stores in Arkansas so I don't know how it could be any kind of loophole now."