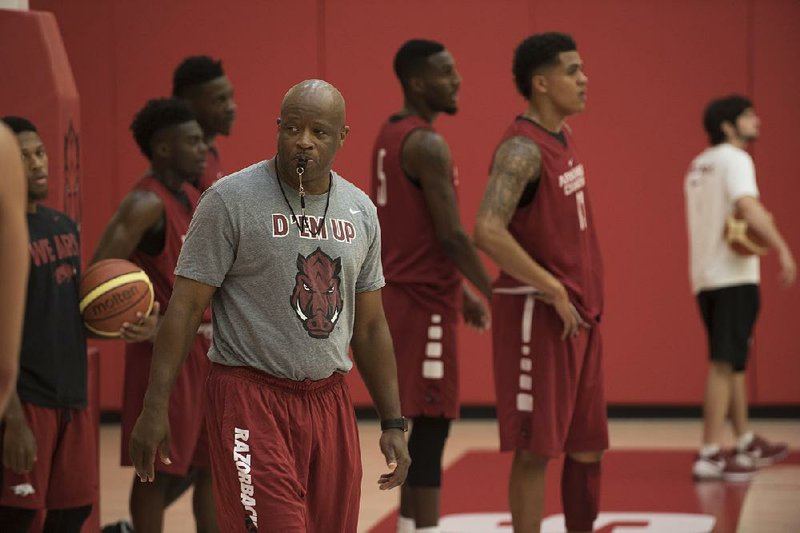 FAYETTEVILLE -- The Arkansas Razorbacks, whose motto under Coach Mike Anderson is they play the fastest 40 minutes in college basketball, will be firing up shots quicker than usual during their four exhibition games in Spain.

Arkansas will play by international rules -- including a 24-second shot clock -- starting with Tuesday's opener against Euro Colegio Casvi in Madrid.

Here is a comparison of the NCAA rules the Arkansas Razorbacks play under and some of the changes they’ll encounter playing by International Basketball Federation (FIBA) rules in four exhibition games in Spain:

Time to get inbounded ball to front court;10 seconds;8 seconds

"Coach has been preaching how he wants us to play faster," junior guard Daryl Macon said. "So the 24-second clock means we've got to pick it up just a little bit more. Six seconds faster is all."

"I don't believe we'll have a problem getting the ball up the court and getting it to the hole," Anderson said. "We'll play fast."

The Razorbacks worked with a 24-second shot clock during their 10 practices at home before leaving Saturday for Madrid.

"With us being a team that's going to get the ball and go, it's actually not too hard adjusting," junior forward Arlando Cook said. "After the first couple of times, we got used to it."

Another significant difference in the international and college games is the three-point line. The international line is 22 feet, 1¾ inches compared to 20-9 in NCAA play.

"The line's a little further back, but I don't think it'll affect us that much," senior guard Manny Watkins said. "When a lot of our guys are shooting their threes, they're not anywhere near the NCAA line anyway."

Senior guard Dusty Hannahs, who hit 81 of 189 three-pointers (43.3 percent) last season, said the international line will have no impact on his shot selection.

"Dusty's never seen a shot he didn't like," Anderson said. "If the line was 30 feet, he figures he can make it from 35 feet.

"It will be a little bit of an adjustment for some of our guys, but I want us to continue to attack the basket, too."

"It spaces the floor out a little bit more," Hannahs said. "The defenders are a couple feet farther out, so it opens up driving lanes as well."

"I was just getting used to the college three-pointer, and then they throw this international one on me," he said. "But it's coming along."

Hazen smiled when asked if he'll shoot three-pointers in Spain.

Hannahs said based on his experience playing European teams, opposing defenses in Spain will be different than what the Razorbacks are used to seeing back home.

"I'd say the defense is a little softer over there," Hannahs said.

The Razorbacks have been practicing with an international ball, which is the same size as the NCAA ball, but not quite the same.

"It's a little slicker than what we're used to playing with, but at the end of the day, it's still a basketball," Watkins said. "It's round and you've got to shoot it and pass it and dribble it just like any other ball.

"You can get into the ball or the rule changes, but the bottom line is when we play in Spain, we've just got to go out there and hoop. If we do that, everything else will take care of itself."