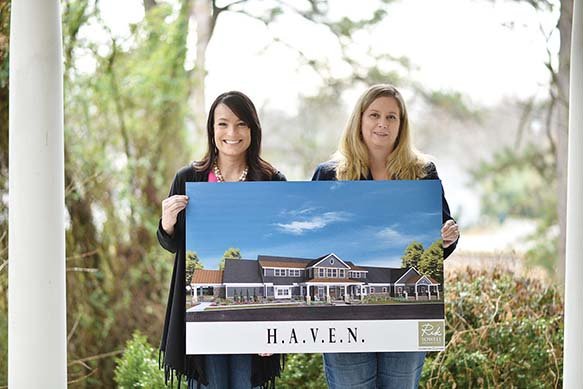 Marti Jones, left, executive director of Help for Abuse Victims in Emergency Need in Conway, and Jennifer Wyse, assistant director, hold an architectural drawing for a proposed home for abused and neglected girls in the program. Jones said the current 1910, two-story frame home is too small and needs repairs. A feasibility study found that the community will support a $1.5 million capital campaign for the project.

CONWAY — A feasibility study to see whether a shelter for girls could support a $1.5 million capital campaign brought the “most positive results we possibly could have asked for,” said Marti Jones, executive director of Help for Abuse Victims in Emergency Need, or HAVEN.

The residential home for abused and neglected girls ages 6 to 18 plans to build a bigger, more modern facility at Country Club Road and Tyler Street.

HAVEN hired Fred Hueston of Conway and Walt Eilers of Fayetteville, whose business is Terrapin Consulting, to conduct the feasibility study and capital campaign.

“The community is behind us …, thinks we need it and will support us,” Jones said.

A program of Counseling Associates Inc., HAVEN opened 30 years ago in Conway and has been in a 1910, two-story home at 1701 Donaghey Ave. for the past 12 years, Jones said. Although it has served HAVEN well, she said, the home needs repairs, and it’s not conducive to a dozen teenage girls. For example, it has only two bathrooms, Jones said, and a kitchen that is unsuitable for the number of people in the house.

The new, 9,000-square-foot home will have 14 bedrooms, including a couple of rooms for teenagers in foster care who have turned 18 and are working or going to college. They will have the support of HAVEN but “more freedom to come and go,” Jones said. “That’s a big need we have.”

Lee Koone, Counseling Associates clinical director, said in an earlier interview that foster children have an ever-growing need for home environments, and some children have been put in hospitals because they had nowhere to go.

“It’s a real crisis, as far as where our kids are able to have adequate care,” Koone said. “We wanted to have the ability to expand our program to serve more kids, but we wanted to have a home environment. I think this will be a wonderful opportunity to meet the needs of all the kids we serve, and the community.”

HAVEN will build on 1.6 acres immediately north of the Julia Lee Moore Elementary School property. Owned by Jim Rankin, it was an overgrown corner that students called Scorpion Hill.

“We’re excited about having a fenced-in backyard,” Jones said in an earlier interview. “Right now, we have a train in our backyard and Donaghey Avenue in the front.”

The new location will have 35,000 square feet of green space, Jones said. “We can have a swing set, and they can play safely in the backyard.”

The property has been rezoned, and Jones said she went before the Conway Planning Commission and the Conway City Council.

“I really enjoyed the process; I learned a lot,” she said.

Jones said Mayor Tab Townsell, after the council approved the rezoning, said he previously lived near HAVEN and talked about its virtues.

She also visited with neighbors to discuss the building plans and explain what HAVEN does.

“It was great; I was a little nervous about it, but I met several different neighbors for coffee who live around there. A lot came to the planning commission. People who live next door said, ‘If you need us to help you, we will.’ There was nobody with opposition.”

One weakness the feasibility study revealed was that some people, although they had a positive response to the name HAVEN, didn’t know if it was a women’s shelter or a homeless shelter. She said HAVEN’s logo is being tweaked to have a “little girl” in it, and the phrase “Every Child Deserves a Home” will be added to the name.

Jones said the silent phase of the capital campaign started Tuesday, and the campaign will be launched publicly at a later date. She said ground won’t be broken on the project until 100 percent of the money is raised.