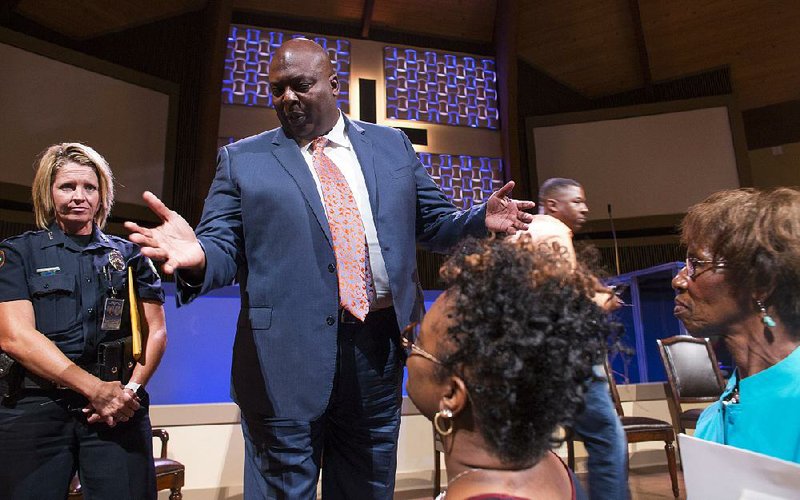 Little Rock Police Chief Kenton Buckner answers questions from Angel Smith (center) and Irene Gillespie (right) at St. Mark Baptist Church in Little Rock on Wednesday. Buckner answered questions by the community, along with other panelists, during a conversation titled Know Your Rights.

Onstage before hundreds of churchgoers and an array of television cameras, Little Rock Police Chief Kenton Buckner slung his blazer over his chair back and picked up a microphone.

It was a Wednesday night, and under the high ceilings of St. Mark Baptist Church's sanctuary the pews were filled mostly with black faces along with a smattering of blue uniforms. The police chief was there to talk about his officers.

"Most of them are professional. But there are some that I wouldn't want making a run to my mother's house," said Buckner, who is black.

Little Rock Mayor Mark Stodola sat next to him onstage, holding a thick manila folder. Two days earlier, in a different policing forum in a different church, Stodola acknowledged that racial profiling was a problem and he listed programs the city runs to improve community relations. But this night he kept the folder closed, sat back and listened to his chief work the room.

City, state and police leaders have spent the past month holding community meetings to deflate racial and social tensions that elsewhere in the country have burst into protests and violence. Stodola, a white former prosecutor, said he's been to five forums in less than two weeks. And more are planned.

But some people worry that instead of building toward any real changes, officials are instead using the meetings to legitimize the way things are.

"What are we accomplishing by having these conversations?" asked City Director Ken Richardson, who is black and involved with the city's Racial and Cultural Diversity Commission. He said he didn't want to dismiss the meetings, but "very rarely do we come away with action steps. And even if we do, very rarely are they implemented."

Arkansas NAACP President Dale Charles was more blunt: "It's just a feel-good situation [so] they can say, 'We met with the community and we heard the concerns.'"

The Honorable Wendell Griffen is a talker.

The 6th Circuit judge is a preacher at Little Rock's New Millennium Church -- "I'm licensed to talk in two spheres," he says -- and he writes a blog called Justice is a Verb.

He wants to nudge other talkers into action. He wants police departments to be more careful about whom they hire. He wants the state to stop building prisons. And he wants independent agencies to investigate police shootings.

On July 5, two white officers in Baton Rouge fatally shot Alton Sterling, a black man selling CDs outside a convenience store while carrying a gun, as they pinned him on the ground. The incident was captured on video. The next day, police pulled over a black couple in suburban Minnesota and, after Philando Castile said he had a gun permit and was armed, a Hispanic officer fatally shot him. Castile's girlfriend live-streamed his death over Facebook.

A day after Castile's death, a gunman in Dallas fatally shot five police officers during an otherwise peaceful protest and injured several others. Ten days later, another man killed three law enforcement officers in Baton Rouge and injured three others.

The video of Castile bleeding out during a traffic stop doesn't present a full picture of the encounter, Buckner said, but "I think most intelligent people that would look at that incident ... would find it very disturbing."

In the past two years, Little Rock police officers have fired their weapons on two occasions, according to the department. Nobody died in either case.

In May, the city agreed to settle a lawsuit brought by the family of Eugene Ellison, a 67-year-old black man who was fatally shot in December 2010. Two off-duty officers found his door open and entered his apartment to find him sitting on a couch in front of a broken glass table. A struggle ensued, and the prosecuting attorney's office found the shooting justifiable. But the shooting continues to weigh on the department's image nearly six years later.

On Thursday, Marcus Sexton died in Little Rock police custody after behaving erratically and fighting the arresting officers. Officers took Sexton to the ground, punched him in his lower left side and placed a knee on his back during the arrest, according to a police report. He continued kicking and flailing after he was in handcuffs, and officers then realized Sexton, 22, was having trouble breathing, according to a police news release. The officers began CPR, and an ambulance took Sexton to the hospital, where he was pronounced dead.

Buckner said the department works to keep current on best policing practices and act transparently. Police read after-action reports from other cities' high-profile cases, and the department maintains accreditation through an outside commission. Anyone can file a complaint against an officer and appeal a decision they disagree with. Superiors pay attention to patterns of complaints, Buckner said, but there's no way to guarantee perfection.

"This is the real world we live in. Police are picked from the same society that we pick everyone else," Buckner said. "I will go to my grave saying the vast majority of police do a great job. But there are 5 to 10 percent of our population that should not be wearing our badge and uniform."

After the forum, people swarmed Buckner. They wanted to take photos with him, introduce him to young people aspiring to join the force or tell him about their problems.

"People want to be heard. They want to have access to the chief," Buckner said. "When people feel like they can touch you, reach out to you and have a genuine conversation, they're less likely to bust your windows out. They're less likely to set something on fire to get your attention."

Buckner took his command staff to the church meeting. Several officers worship at St. Mark, and "we wouldn't want people to worship together and not trust each other," said senior pastor Phillip Pointer.

Gov. Asa Hutchinson told the people gathered Aug. 1 at St. Luke Baptist Church that Arkansas is fortunate to have been spared the unrest seen in Missouri and Maryland, but he said the state must grapple with the same issues.

"I understand disparity in the system," the former U.S. attorney and Drug Enforcement Administration leader said. Hutchinson, who is white, acknowledged the experiences of black people who have felt profiled by police, adding: "We have to have a change in attitude. We have to have more education for our police officers."

New recruits for the Little Rock Police Department undergo 24 weeks of basic training, and all officers take 40 hours of annual in-service training. That's much more than the state's standards, Buckner said, but it's not a cure-all.

"You think a four-hour block of implicit bias [training] is going to retrain a racist?" he said. "C'mon, let's wake up."

Some people trace the problem to officers who live in small, overwhelmingly white towns and commute to Little Rock for their shifts. Maybe they would understand the black community better, the thinking goes, if they lived among black people rather than only encountering them while on patrol, said Marion Humphrey, a retired circuit judge for Pulaski and Perry counties, who is black.

Little Rock experimented with a residency requirement in the 1990s, but it made recruiting enough officers difficult, Stodola said. He said mandating that officers live in the city would set back efforts to fill the department's dozens of vacancies.

More than 600 people applied to the latest class of police recruit school, and only 31 qualified for graduation last week. "And since the Dallas shooting, there were two more out of that 31 that have dropped out," he said. "It's not an easy job."

Instead of a mandate, Buckner said he would support incentives, like allowing officers who live in Little Rock to take home patrol cars. Richardson, who has served as a city director since 2007, said he's been pushing that idea for years.

"In order for us to really know what the problem is, we have to collect the data," she said.

Some activists also have called for a civilian review board for the police. Charles said the NAACP pushed for that in the 1990s, but dropped it after realizing state-level constraints would leave such a board toothless.

Buckner sees a need for more officers from minority groups along with "changing police culture," coupled with improving graduation rates and sending more people to college. Those improvements will only come at a "snail's crawl," he said.

"There are no easy solutions left. The only thing left is heavy lifting," he said.