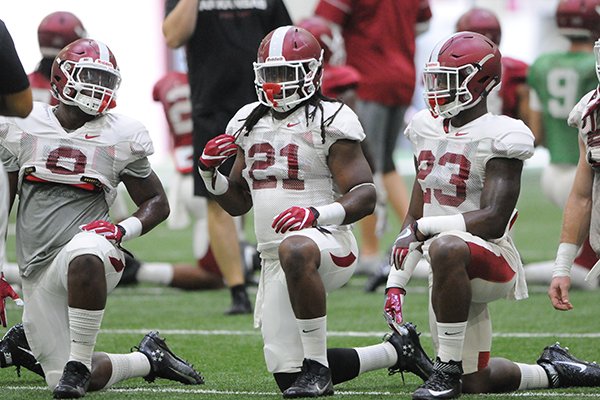 FAYETTEVILLE -- Bret Bielema got choked up Wednesday while talking about linebacker Josh Williams' recovery from a severe broken leg.

Williams had a scary time frame, when there were questions about whether he'd keep his right leg, within a couple of weeks after it was broken on a cut block during Arkansas' 24-20 victory at Tennessee on Oct. 3.

Ellis and Greenlaw were solid run stoppers last year, but both need to improve in pass reactions, agility and coverage. Providing quality relief to Ellis and Greenlaw is critical this season, and a number of players look prepared to help. The strong-side linebacker won’t be needed a lot in early games but will against heavier run teams in SEC play.

Williams spent his 22nd birthday, the day after the game, in the hospital.

"We took him a birthday cake, and he was just having fun," said Bielema, his eyes welling with tears. "He's unwavering in his faith and stuff, so to see a guy like that in his senior year is pretty cool."

Williams' rehabilitation from the procedure -- which included the insertion of a rod in his leg and subsequent complications, which neither Williams nor Bielema will discuss -- has been nothing short of spectacular. The 6-1, 249-pounder has been back at first-team strong-side linebacker since early in training camp.

"I know I read many media stories about, 'He may never play again,' but, hey, I'm back out there," Williams said. "There's no problem with it. I'm better than ever.

"I almost lost my leg. I really think I'm supposed to be in the hospital now instead of out here making plays."

Williams said his religious faith helped him through his struggles.

Bielema said Williams proved he was all the way back in a drill Tuesday.

"He knocked Jack Kraus into next week on just a little step punch," Bielema said. "It showed that if he wants to do it, he can do it."

"There is not a better person in our program than Josh Williams," defensive coordinator Robb Smith said. "The guys love being his teammate, and we're happy to have him back.

Linebackers coach Vernon Hargreaves said it would have been tough to predict Williams could get all the way back to the field when his injury occurred in October.

"I tell you what, he's fought through it," Hargreaves said. "I think he's way ahead of where anybody thought he would have been."

Williams' recovery has helped bolster a linebacker group that got low on numbers last season. Brooks Ellis and Dre Greenlaw were the top two tacklers, with 102 and 95 tackles respectively, but neither left the field much.

"When I got hurt, it's like I left those two hanging," Williams said. "But I'm back in action."

The coaching staff is encouraged about how sophomore Kendrick Jackson, who lettered as an emergency fullback last year, and freshman De'Jon Harris are looking at middle linebacker behind Ellis.

"I want to go out there and shine as well," Jackson said. "I feel like it's my time, and I want to show everybody why I came here to play linebacker."

Dwayne Eugene and Khalia Hackett also are making strides, and the freshman class of Harris, Alexy Jean-Baptiste, Dee Walker, Giovanni LaFrance and walk-on Grant Morgan is building up depth that was lacking.

"I think from the numbers standpoint ... we've got some guys there that will at some point in time provide us some more depth," Hargreaves said.