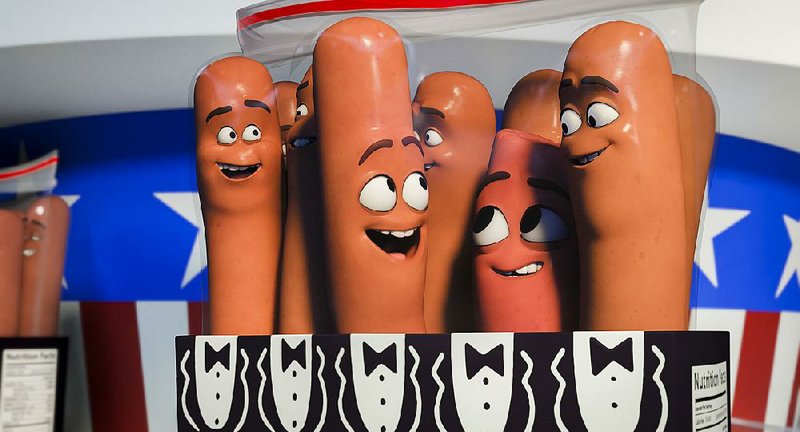 For an adult cartoon that prides itself on flouting any sort of good taste, Sausage Party seems curiously anemic on laughs for a movie whose villain is a feminine hygiene product (voice of Nick Kroll). Its hour and a half running time includes about 15 minutes of inspired vulgarity.

Spearheaded by masters of stomach-churning delights Seth Rogen, Evan Goldberg and Jonah Hill, Sausage Party's musical opening delivers double- and even triple-entendres, sacrilege, ethnic stereotypes, profanity, drug references and food shaped like the naughty bits of people. Thanks to a tune co-written by Disney and Broadway master Alan Menken, the potential delicacies' praise of the humans they mistake for gods is as catchy as it is guilt inducing.

Rogen and Kristen Wiig star as, respectively, Frank the Hot Dog and Brenda the Bun, lovers clearly made for each other but separated by shrink wrap. Both are stuck in stifling packages with obnoxious peers. Each morning the two sing their prayer in hope that the gods (that is us) will take them out of their plastic bags and allow them to do what they're visibly designed to do. Obviously, they don't realize that they're about to become meals.

Stuffed into a cart that's headed toward the exit, all the food and toiletries inside spill out. Frank and Brenda try to save a falling bottle of honey mustard (Danny McBride) but wind up abandoned on the floor with a leaking, misshapen feminine hygiene product. Denied his chance at glory, the cleansing agent pursues the two lovers as they slowly discover that life outside the store might not be so wonderful, either.

Along the way, they discover a bagel (Edward Norton) who feuds with a slice of pita bread (David Krumholtz) and a taco (Salma Hayek) who seems as drawn to Brenda as Frank is.

If Rogen, et al., aimed solely to offend, then Sausage Party would be an unmitigated masterpiece. There's no place these folks are unwilling to go in order to score a laugh. Unfortunately not every dirty joke is funny.

The pun-filled packages the food reside in elicit more groans than chuckles. And while the world outside the store is an occasionally Dante-esque collection of the horrors of consumerism, there just aren't enough scenes of amorous edibles to keep the sinful momentum going.

The character designs are hit-or-miss. The buns certainly look, um, female, but without Wiig's vivid performance, Brenda would have no discernible personality at all. Likewise, Hayek takes what could be a lame barroom ethnic joke and manages to be downright poignant.

Here's hoping the better moments make their way to YouTube shortly. Without the proper comic nutrients, Sausage Party leaves viewers with a feeling of indigestion.