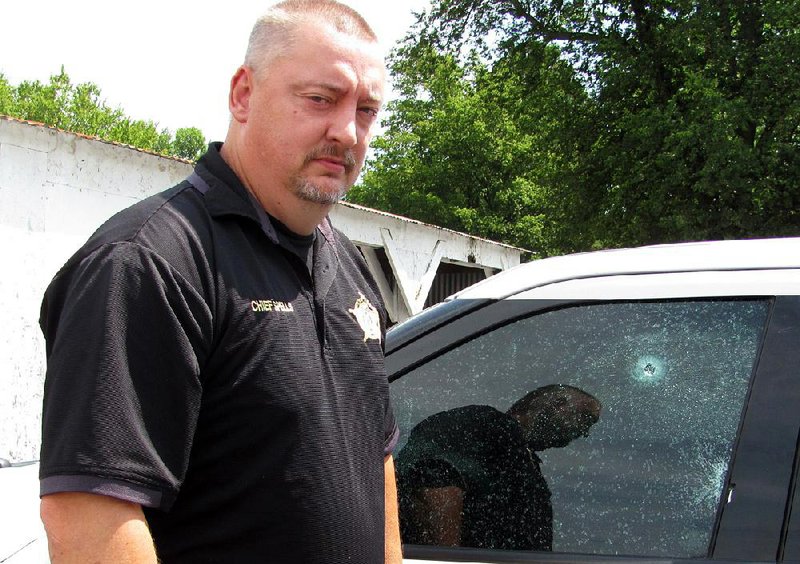 Hackett Police Chief Darrell Spells escaped with only a fl esh wound in his left temple Wednesday when a bullet pierced the driver’s-side window of his official SUV. The chief says he counted seven to nine bullet holes in his vehicle after the standoff with Billy Jones. 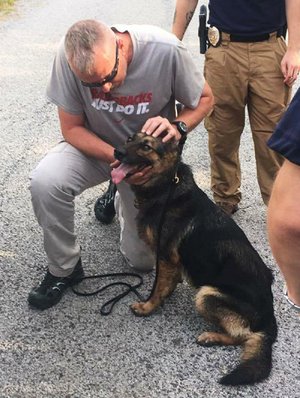 Photo by Special to the Arkansas Democrat-Gazette
Police dog Kina of the Greenwood Police Department is checked out Friday after the dog disappeared after being wounded in a confrontation Wednesday that killed Sebastian County Deputy Bill Cooper. The dog had two bullet wounds but is recovering, officials said.
RELATED ARTICLE

In the driver's seat of his sport utility vehicle, Spells bent over the center console.

"I knew I had to get out of my vehicle, or he was going to keep firing," Spells said Friday, two days after he and other officers took gunfire. "I pushed out the passenger- side door, and I dove into a ditch."

Inside the trailer: 34-year-old Billy Monroe Jones. Police believed he was wearing a ballistic vest and firing an assault-style rifle.

The Arkansas State Police is still investigating what happened after Sebastian County 911 received a domestic disturbance call about 7 a.m. Wednesday.

Jones reportedly threatened a family member with a gun at their homes on Arkansas 253 between Greenwood and Hackett.

State police spokesman Bill Sadler refused to say Friday what type of gun or guns Jones used during the standoff, whether he possessed them illegally and whether deputies and police fired back. He said his agency doesn't release details of a crime until its investigation is complete.

During the almost four-hour standoff, police tried to send in a robot but failed. Finally, they rolled an armored vehicle up to Jones' door -- and he surrendered.

Spells, only grazed by the bullet to his temple, was back at work Friday and answering questions about what happened.

They were grieving the 66-year-old Cooper's death.

Officers braved gunfire to pull Cooper and Spells away from Jones' house and rush them to Sparks Regional Medical Center, according to Marx and Spells.

The 42-year-old Hackett police chief was released from the hospital about noon Wednesday.

Cooper, a husband and father of three, died about 1:15 p.m. that day, according to Sebastian County Sheriff Bill Hollenbeck.

"He was one of the first people I met when I took the job at Hackett" three years ago, Spells said of Cooper on Friday. "I remember him walking in the door of my office and welcoming me. I'll always remember that."

Funeral services for Cooper are set for 10 a.m. Tuesday at the Fort Smith Convention Center, the Sebastian County sheriff's office announced Friday. Visitation will be 2 p.m. to 8 p.m. Monday at First Baptist Church in Greenwood.

The female German shepherd had been shot twice while inside a police car at the standoff and showed entrance and exit wounds, according to a Facebook posting by the Police Department. Kina was treated for her injuries at a Greenwood veterinarian clinic Friday.

Sometime after 7 a.m., Spells heard the police radio say a subject off Arkansas 253 had a gun. Officers were starting that way.

The police chief drove to a law enforcement staging area about a mile from Jones' house. He offered to help and spent a few minutes directing traffic away from the gunfire.

"Then the call came that Deputy Cooper had been hit," Spells said.

"We had to go get him" and aid at least three other Sebastian County sheriff's deputies and Greenwood officers who were dodging gunfire.

When Spells arrived at Jones' house, he couldn't get his vehicle closer than 100 to 150 yards away, he said.

After crawling out of his vehicle, Spells found himself in a ditch. Another law enforcement officer spoke reassuringly.

Marx was getting a haircut that morning when his cellphone rang. He left midcut and traveled to the law enforcement staging area.

"When we arrived, we heard there was an officer down," Marx said.

In his car, Marx led other officers down the road to Jones' house. He could hear gunfire.

Marx parked in a tree line, the only concealment available, and was joined by Barling police officer Keith Lindley, who climbed in beside him.

Marx asked Deputy Charles Capps to provide cover fire so Marx and Lindley could try to rescue the wounded, he said. They pulled up behind Spells' vehicle. Lindley got out and helped Spells get in.

Cooper apparently had been among the first wave of officers to arrive after the shooting started. He had gotten out of his police car, Marx said. Cooper apparently was shot about 20 yards from where Spells was injured.

"People were coming in as fast as they could get there," Marx said.

Officers used an armored vehicle to remove two residents of the area and pulled out at least one trapped officer.

Asked if police returned Jones' fire, Marx said, "I can't answer that question. We weren't sure where it was coming from. There were two trailers practically on top of each other."

Later, Marx learned that Jones was shooting from windows inside his house.

Officers tried to use a robot that belongs to the Fort Smith Police Department to scope out more about Jones' location.

"He shot and disabled it," Marx said.

Jones "held out a white cloth. He came out with his hands in the air."

During his 14 years in law enforcement, Spells said Friday, no one had ever shot at him before.

Said Marx: "No one ever shot at me like that."