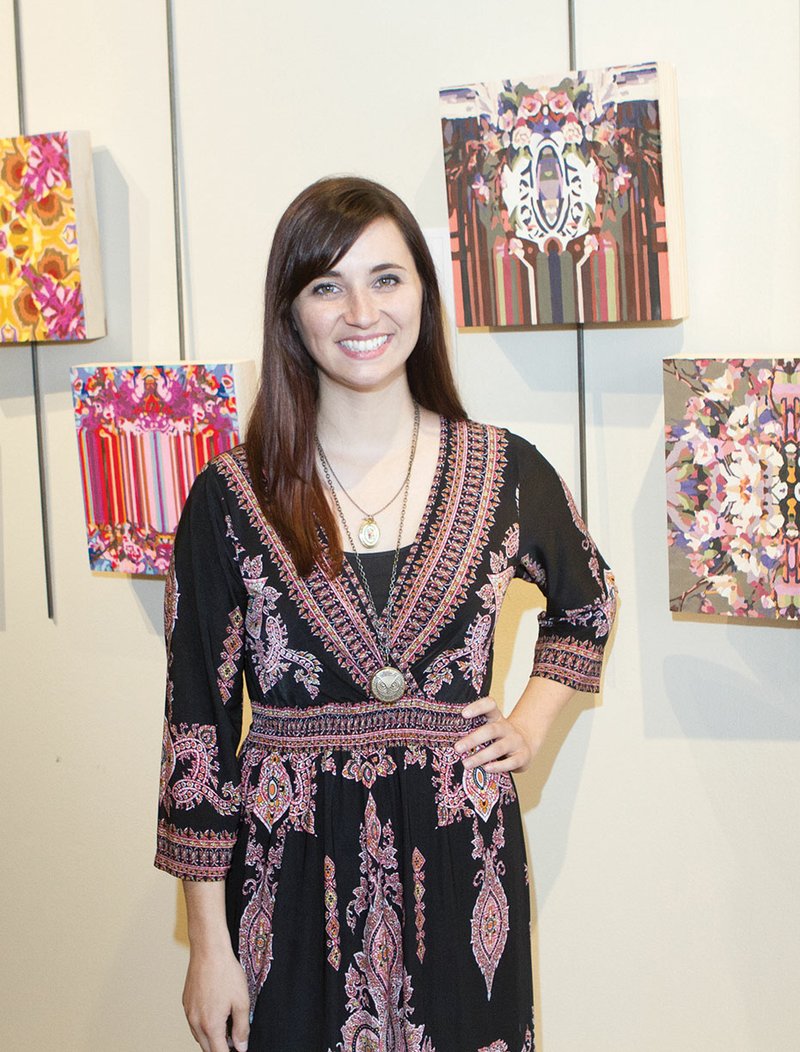 Russellville artist Rachel Trusty, who has just been hired as an art instructor at the University of Arkansas Community College at Morrilton, shows some of her own artwork. She has eight pieces on exhibit in Culture Shock: Shine Your Rubies, Hide Your Diamonds in Concordia Hall at the Butler Center for Arkansas Studies in Little Rock. Partially shown here, the works are part of her Bouquet series, which are acrylic paintings on wood panels and are part of a larger body of work she calls Floral Collection.

Life is good for Rachel Trusty.

The Russellville artist just returned from an internship experience in the United Kingdom, began a new full-time job this past week and will assume the presidency of a statewide art organization later this month.

In addition to these most recent accomplishments, Trusty, 33, continues to serve as the gallery coordinator of the William F. Laman Public Library System in North Little Rock. She also has her own art on display in a group exhibit by several female artists called Culture Shock: Shine Your Rubies, Hide Your Diamonds, which will remain on display in Concordia Hall at the Butler Center for Arkansas Studies, 401 President Clinton Ave. in Little Rock, through Aug. 27.

Trusty participated in the Summer 2016 Open Palace Programme in the United Kingdom on July 17 through Aug. 5.

“I was selected to participate in this prestigious program in order to work alongside professionals in five of the most significant heritage sites of the United Kingdom, identifying and advising practical solutions to critical issues the heritage and museum communities are currently tackling,” she said. “This program focused on building preservation, collections management, interpretation, object handling, heritage learning and visitor behavior studies.”

Trusty said among the sites she visited were the Tower of London, Hampton Court, Kensington Palace, Stowe palaces and Number 1 Royal Crescent, along with other historical sites, such as Stonehenge and the Bath preservation sites.

“I hope to be able to use some of the information — helpful hints — I gained through this internship in my role as curator of various art exhibits,” she said, adding that in addition to coordinating exhibits for the Laman Public Library System, she also curates the annual Delta des Refusés art exhibit, which will be held for the third year in June and July 2017.

“I learned things about visitor flow, use of different signage and how to borrow from other collections to make your exhibits more in-depth and friendly for everyone,” she said.

Trusty said she is always looking for ways to enhance her career and was advised “not to try to get another degree, since I already have my [Master of Fine Arts degree], but to look for more experience. “I was looking online for internships relating to museums and found this opportunity,” she said. “It was pretty amazing. I was one of 23 participants, who all were female. We came from the United States, Australia and New Zealand.”

According to information on the website openpalace.co, the program is open to all English-speaking students and “emergent professionals” ages 18 to 50. Participants pay their own fees.

Following her return from London, England, on Aug. 5, Trusty reported Aug. 8 to the University of Arkansas Community College at Morrilton, where she has been hired as an art instructor.

“I’ll be teaching all levels of art, including art appreciation, studio and classroom courses,” she said. Classes begin Monday.

Trusty is already familiar with UACCM, as she taught art appreciation there during summer 2010.

“Teaching on the college level is what I have always wanted to do,” she said. “I love working with exhibits as well. So I’ve now got the best of two worlds.”

Trusty will assume leadership of the Arkansas League of Artists organization when she begins her term as president of the statewide group at its next meeting, set for 7 p.m. Aug. 30 at the North Little Rock Community Center/Parks and Recreation Offices, 2700 Willow St.

“I’ve been a member of the organization since 2011. When I first joined, they were all so encouraging. They have several shows a year with really great cash awards,” she said.

“The first year I entered, I placed twice. That was encouraging for me,” Trusty said.

“The quality of work in the shows is phenomenal,” she said. “And it’s gotten even better during the past five years.

“I’m not exactly sure of my duties yet, but I am looking forward to getting onboard.”

Work by members of the Arkansas League of Artists is on display through Oct. 22 in a juried exhibit in the Butler Center galleries in Little Rock.

Trusty is also a member of the Arkansas Arts Council’s Arkansas Artists Registry, and her work has been included in several of the council’s Small Works on Paper exhibits.

“I missed the SWOP this year,” Trusty said. “I love that show. I definitely plan to enter next year.”

“We will begin accepting entries for the 2017 Delta des Refusés in March,” she said. “I will begin posting announcements on social media sometime after the first of the year, and information will be available on the website as well — deltadesrefuses.com.

“Right now, we are planning to have it at the Thea Foundation in North Little Rock, where it was held this year, and at the Argenta Branch of the William F. Laman Public Library System, where it was held last year,” she said. “If it outgrows both of those facilities, hopefully, I will find a third location, too.”

Trusty said she always wanted to be an artist.

“My mother sewed a lot and did crafty things when I was a child. She made all my clothes. I remember sitting on the floor of her sewing room, picking up pieces of material and making things,” Trusty said.

“Then when I got to school, I always liked to draw,” she said. “I liked the technical aspect of drawing. That became my hobby, and by the time I was in high school, art had become an obvious choice for me to pursue in college.

“My art instructor at Russellville High School, Max Hines, helped me get my slides together, and I applied to the University of Central Arkansas and received one of two freshman art scholarships that year.”

Trusty graduated in 2002 from Russellville High School and in 2006 from UCA with a Bachelor of Arts degree in art education. She received a Master of Fine Arts degree in studio art from the Art Institute of Boston at Lesley University in 2011.

In addition to the 2010 summer session at UACCM, Trusty has taught at several other places since she graduated from UCA, including Alma Middle School, which was her first teaching experience, Perryville High School, Arkansas Tech University, Benton High School, Pulaski Academy and Mayflower High School.

“I like to work with a variety of materials,” Trusty said about her artwork. “I usually work around a theme. I was making mixed-media pieces where I put a realistic figure with patterning somehow. That slowly led to more abstract patterned work like the work at the Butler Center. I would like to explore the combination of abstract patterns with realism more.

“I would like to make new work this year once things settle down. I’m not sure what direction I want to go with it yet, but I’m sure I’ll get there.

“I’m taking on a lot of new things in my life at once, but it’s all good.”

When she has time, Trusty said, she enjoys going out in Little Rock to listen to live music.

“I also make things — arts and crafts,” she said. “I like crafts, as well as fine art.

“I also love going to movies. I especially like going to the movies right before the Oscar season. I like to see what’s good and what’s not good so I can make my own decision. I also like independent films.”

Trusty said she does not have a favorite movie.

“There are too many,” she said, laughing.