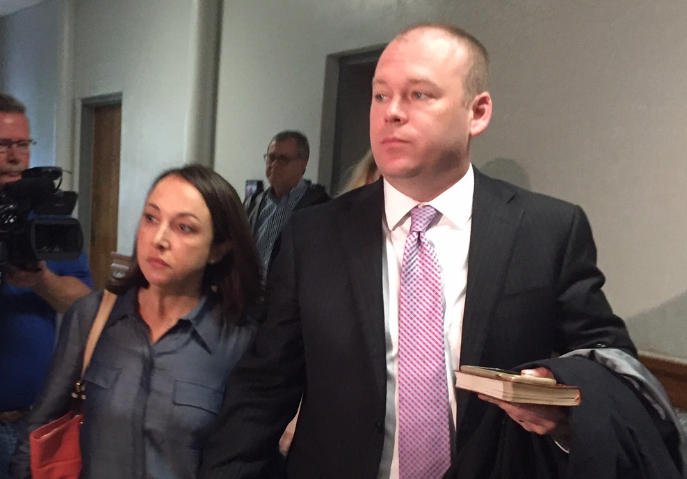 HOT SPRINGS — A jury of six women and six men has been seated in the trial of Circuit Judge Wade Naramore, who is charged in his toddler son’s hot-car death last year.

The 12-member jury, plus one alternate, was selected after a process that began at 8:30 a.m. and continued until shortly before 6 p.m. Monday, the first day of Naramore’s trial before Judge John Langston in Garland County Circuit Court.

Through questioning from defense and prosecuting attorneys, about 15 potential jurors were excused, many telling the court that they had already formed an opinion in the case.

One of the male candidates, echoing similar sentiment among other potential jurors excused, said he could listen to testimony from both sides but would largely side with a verdict of guilty.

That juror, who works with children, said it would be hard to change his mind based on his view of the difficulty of forgetting a child in a vehicle.

He added that it would not be easy for him to see photographic evidence of the child’s death given his “soft heart.”

Naramore’s 18-month-old son, Thomas Naramore, died after being left in a hot vehicle for hours in Hot Springs in July 2015.

Others, meanwhile, said that while they felt sympathy for Naramore and his family, they could be impartial in the case, making a decision based solely on the evidence presented.

Juror candidates were asked about their views on accuracy in the news media — a line of questioning that addressed what has become a high-profile case and attempted to eliminate potential jurors who might have read or watched stories on the Naramore case.

On several occasions Monday, Naramore embraced his wife, Ashley, who has been by his side throughout pretrial hearings leading up to the start of his trial.

Naramore at times also placed his hands on a small book lying directly in front of him at the defense table.

Court adjourned shortly after the jury process ended Monday evening. The second day of Naramore’s trial, which is set to include opening statements, will begin at 9 a.m. Tuesday.

By around 3:40 p.m., nine had been excused from Naramore's negligent-homicide trial. At that time, two replacements were being questioned on their impartiality.

Check back for updates as the trial continues and read Tuesday's Arkansas Democrat-Gazette for full details.

HOT SPRINGS — Jury selection has begun in the trial of Garland County Circuit Judge Wade Naramore, who faces a charge of negligent homicide in the hot-car death of his 18-month-old son last summer.

Before a lunch break, two potential jurors had been replaced from the pool of more than 50 people — one because of a medical condition and another citing concerns over impartiality, particularly given a relative’s work history with Naramore as well as her positive perception of the judge.

As many as 180 people were initially expected to be called as potential jurors, the Arkansas Democrat-Gazette previously reported.

At least five of the potential jurors knew of Naramore in some form, including one who said that while he could be impartial, the news media had been biased in its reporting.

That juror, who goes to church with the judge, reiterated later to prosecuting attorney Tom Young that Naramore had been “hung out to dry by the media.”

Once court resumes at 1 p.m., the defense is set to question that juror as well as the 17 others remaining in the first pool.

Naramore's toddler son, Thomas Naramore, was found unresponsive in a vehicle July 24, 2015, in Hot Springs on a day when temperatures reached the upper 90s, with heat indexes of around 105 degrees.

Naramore was arrested in February after a special prosecutor opted to charge him in the case. He hasn't presided over any cases since his son's death and was placed on suspension with pay after his arrest. Special judges have been filling in.

If convicted of negligent homicide, a class A misdemeanor, Naramore could face up to one year in county jail and a $2,500 fine.

Once jurors are seated, jury instructions and opening statements will begin in Naramore's five-day trial.

At the start of the trial Monday, retired Judge John Langston ruled in Garland County Circuit Court that charges not be dismissed after missing video evidence came to light.

Check back for updates as the trial continues and read Tuesday's Arkansas Democrat-Gazette for full details.