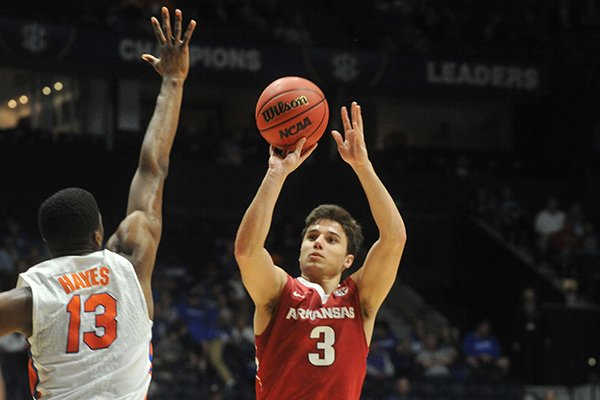 Arkansas guard Dusty Hannahs (3) shoots the ball during an SEC Tournament game against Florida on Thursday, March 10, 2016, at Bridgestone Arena in Nashville, Tenn.

Arkansas' basketball team took European Academy to school with a 124-55 victory Sunday in Barcelona in the fourth and final game of the Razorbacks' exhibition tour of Spain.

Freshman guard C.J. Jones, a spring signee from Birmingham, Ala., led the Razorbacks with 23 points in 18 minutes off the bench. He hit 8 of 12 shots, including 3 of 5 three-pointers and had 4 rebounds and 2 assists.

Jones scored 56 points in 49 minutes in the exhibition games and hit 20 of 38 shots.

Razorbacks senior guard Dusty Hannahs scored 19 points Sunday, making 7 of 10 from the field, including 5 of 7 three-pointers behind the international line of 22 feet, 1¾ inches.

Arkansas forced 34 turnovers and outscored European Academy 46-10 in points off of turnovers.

"I thought our defense was real solid," Anderson told wholehogsports.com. "Offensively, we had good ball movement and got some easy shots from our defense."

"I didn't know what to expect coming over here, and obviously in the first game we got something unexpected," Anderson told wholehogsports.com. "But I thought we learned from it and brought the fight in each and every game.

"That was the difference in the last three games."