Normal after all, Biles gets bronze 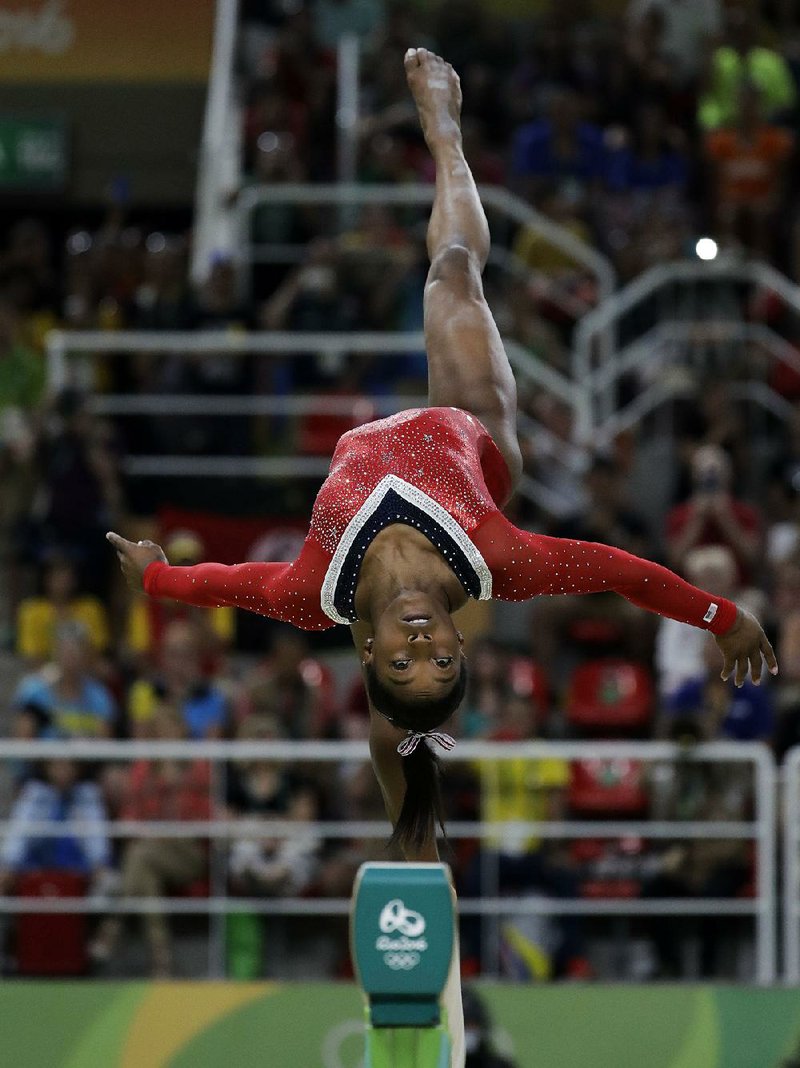 American gymnast Simone Biles turned a couple of slips into a bronze medal Monday in the balance beam final in Rio de Janeiro. Biles has earned four medals at the Olympics, three of them gold. She’s not done yet.

As she reached down to steady herself on the balance beam -- her first visible misstep during an astonishing Olympics that includes three gold medals and some of the most boundary-pushing gymnastics ever -- one thought ran through her head.

And that's it. Nothing more. Sure, winning a record five gold medals in Rio de Janeiro would have been cool. Yet going 5 for 5 was always somebody else's deal. It wasn't hers. Her only regret in earning bronze during the beam final on Monday centered on those five seconds when she found herself scrambling trying to recover from a wobbly landing following a front flip.

Even if it wasn't quite good enough to stand atop the podium for once. Her score of 14.733 ended up well behind the 15.466 put up Sanne Wevers of the Netherlands and the 15.333 American teammate Laurie Hernandez posted while grabbing silver. Biles won't leave Brazil with five golds -- something no female gymnast has ever done -- and she's totally OK with it.

"I think you guys want it more than I do," Biles said. "I just want to perform the routines that I practice."

Biles will get one more shot Tuesday in the floor exercise final, where a victory would let her join Larisa Latynina, Vera Caslavska and Ecaterina Szabo as the only women to win four golds during an Olympic meet. It's heady territory for a 19-year-old, one who couldn't help but sigh as the admitted perfectionist waited for her score to flash.

"She wasn't happy with it," Coach Aimee Boorman said. "She doesn't like to make mistakes. It's life and it happens and yes, she is human."

Even if Biles had nailed her routine, there's no telling if she would have matched Wevers and Hernandez. Wevers was stunning while working across the 4-inch slab of wood 4-feet off the ground, calling it the performance of her life, one that ended with a hug from Dutch King Willem-Alexander and a phone call from the prime minister.

"To be out there and do my best routine ever in such a big final was amazing," Wevers said.

It needed to be for Wevers to edge Hernandez. The 16-year-old is the youngest member of the "Final Five" that have turned the Rio Olympic Arena into a showcase highlighting the widening gap between the U.S. women's program and the rest of the world. Yet she hardly looked overcome by the moment as she dazzled on her favorite event while securing a seventh medal for the American women.

"I'm very comfortable when I'm up there," Hernandez said. "It's incredible to be able to tumble on four inches of wood."

Something that comes second nature to Hernandez, who regularly turns any random street curb into a chance to practice. She did it on her way to the venue on Monday, helping calm any lingering jitters.

"I don't really think about it," Hernandez said. "I could probably sprint on the beam if I want to."

The medal also gave the relentlessly charismatic Hernandez a chance to step into the spotlight after national team coordinator Martha Karolyi opted to keep her budding star out of the all-around competition during qualifying. Hernandez accepted the assignment without complaint, her voice among the loudest in the arena during Biles' gold-clinching floor exercise. Biles returned the favor after Hernandez stuck her dismount, the two good friends laughing during the seemingly interminable wait for the score.

"She does those same exact routines in practice," Biles said. "I'm so glad she could share that with the world and show how hard she's been training."

Hernandez turned professional shortly before arriving in Rio and could fill the void at the top of the U.S. program if Biles decides to take a break after the games. True stardom awaits her once she returns home, a notion Biles is vaguely aware of but trying to tune out. She still considers herself "normal" even as other Olympic athletes stop her in the village to pose for selfies or say "Hi."

There will be a sense of relief when she finishes her Brazilian-themed floor routine today, an event where she's the reigning world champion and put on a display during the all-around final that Karolyi called the closest thing to perfection in the sport. One momentary lapse Monday did nothing to diminish Biles' extraordinary time in Rio.

Print Headline: Normal after all, Biles gets bronze