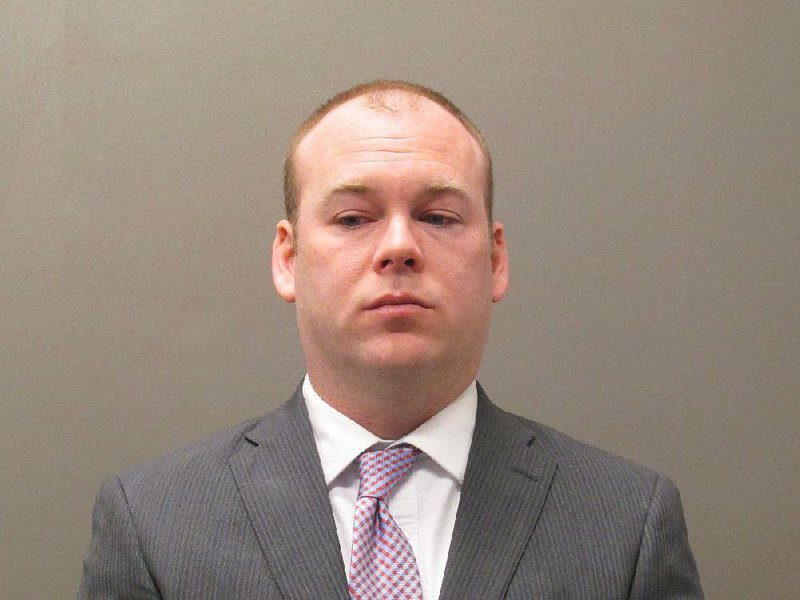 Wade Naramore is shown in this file photo.

HOT SPRINGS — Judge Wade Naramore was inconsolable in the days after his 17-month-old son's death, his mother-in-law testified Thursday afternoon.

Jan Wright recalled how she learned of Thomas' hot-car death, telling jurors that as she baked a peach cobbler for friends around 3:05 p.m. July 24, 2015, she received a call from Naramore.

On the other end of the line, Wright said, she could only hear faint sounds before hearing screams get louder and eventually turn into wailing. The call, she presumed, related to Thomas' day at day care.

"Wade, I can't hear you," Wright said she kept repeating. As the call progressed, Thomas' grandmother said she could hear Naramore, unable to describe what had happened, screaming and asking her to call 911 before the conversation ended.

She then called her son, Spencer Wright, and her husband to seek guidance and help on how to respond to Naramore's plea.

Wright said her son later told her to come with her, not telling her what had specifically happened. The grandmother, suspecting the worst, repeatedly asked, "Thomas is dead, isn't he?" she testified.

Naramore remained shaken, unable to communicate the day of and in the days after, Wright said. At most times, his mother and wife, Ashley, were by his side, she said.

Wright said that the close-knit family stayed at her house for what she believed to be around two weeks. Naramore required medication after being unable to sleep at night — screaming and waking up on several occasions, she told the court.

Naramore's mother-in-law said she never felt resentment or placed blame on Naramore for her grandson's death.

"Not one second. Never, ever," Wright testified. "Those things can happen to anybody."

Naramore's brother-in-law, Spencer Wright, and Thomas' teacher also testified Thursday, each presenting their character accounts of the judge and interactions with Thomas.

The fifth and what is expected to be the final day of Naramore's negligent homicide trial is set to begin at 9 a.m. Friday.

Prosecuting attorney Tom Young questioned Diamond on whether Naramore was in fact sleep deprived and enduring a chaotic morning the day of his toddler son's death last summer.

Diamond called Naramore's account subjective, with his potential stressors related to deviations from his typical schedule.

During cross-examination, Young also sought clarification on Naramore's daily routine, including the number of times the circuit judge took his son, Thomas, to day care.

Diamond said that while he had researched certain documents such as the day care sign-in log, he did not feel it necessary to cite specific figures in determining his findings as he saw them.

Those causes, he said, were chaotic or atypical circumstances, sleep deprivation, stress or distraction and absence of a cue to indicate a child was in a vehicle.

Referencing the case of 17-month-old Thomas' death, Diamond said additional responsibilities Naramore was tasked with that day, meeting with a violent offender set to appear in court and lack of sleep because of the toddler's teething, made him more likely to follow his habits rather than noticing his child.

Those habits, he said — referencing Naramore's routine pattern of leaving home, taking Thomas to day care and going to work — made him unaware that he had not taken his child to day care after an out-of-the-ordinary stop at McDonald's on July 24, 2015.

Diamond said that Thomas' quiet nature during much of the car ride after a typical morning prayer also played a role in Naramore being unaware that his son stayed in his car as he went about his work duties and later ran errands for he and his wife's anniversary.

The defense expert also presented an example of a mother who had left her child, Bryce Balfour, in a vehicle — calling that hot-car death a "horror beyond belief" — and part of a phenomenon that affects even those who say it could never happen to them.

The fourth day of Naramore's trial was set to resume around 1:15 p.m. Thursday.

Check back with Arkansas Online for updates on this developing story and read Friday's Arkansas Democrat-Gazette for full details.

HOT SPRINGS — The fourth day of the negligent homicide trial of Wade Naramore began with an expert who was paid about $10,000 to testify.

Dr. David Diamond, a scientist and professor at the University of South Florida in Tampa, has studied "forgotten child syndrome" for over 12 years.

Diamond, the second defense witness in the case, remained on the stand later Thursday morning.

Naramore, a Garland County circuit judge, faces the misdemeanor charge in the death of his 17-month-old son, Thomas, who died after being left in a hot car in July 2015.

The trial began Monday with jury selection and continued with the start of testimony Tuesday. The prosecution rested its case Wednesday.