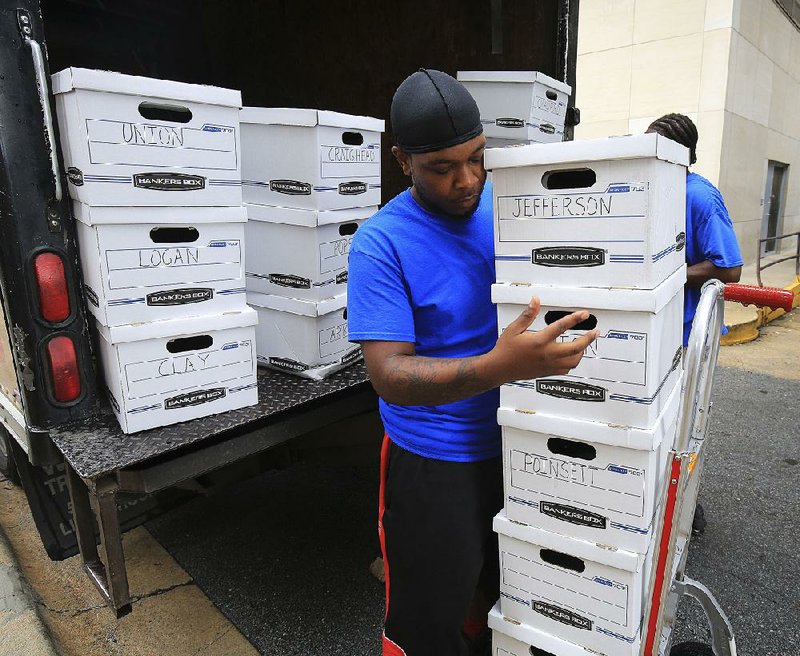 Dominic Matlock (left) and Ken Cooney of Ron’s Moving on Friday morning unload boxes of petitions on a medical-marijuana proposal to be turned over to the secretary of state’s office.

If the amendment qualifies, it will be one of two medical marijuana measures approved for the ballot. The Arkansas Medical Cannabis Act, backed by Arkansans for Compassionate Care, was certified for the ballot by Secretary of State Mark Martin's office in July.

"I am so confident that it will pass," Couch, an attorney, said of his amendment. "Times have changed. People have gotten more used to it. More states have done it. There's been more studies, more literature" supporting the use of medical marijuana.

But Melissa Fults, campaign manager for Arkansans for Compassionate Care, had repeatedly asked Couch not to submit more signatures. If both measures appear on the Nov. 8 ballot, she argued, both would fail.

On Friday, she said Couch's submission wasn't a surprise.

"The only thing we can do is educate people and tell them they have choices and just pray that they make the right choice," she said. "I mean, that's all we can do. We don't intend to fail. It's going to make it much more difficult. We'll be fighting on two fronts, but I think we have enough heart and enough volunteers that we'll overcome it."

If two conflicting ballot measures pass, the one with more votes becomes law, Chris Powell, a spokesman for Martin's office, has said.

Couch submitted 99,626 signatures on July 8 to the secretary of state's office, which ruled on July 28 that only 72,309 were valid. That was short of the 84,859 valid signatures needed to make the ballot, but it did qualify Couch for a 30-day extension to gather more signatures.

On Friday, Couch said he submitted another 35,000 signatures for the secretary of state's office to check. He also said he cured some deficiencies in what he had submitted, resulting in about 5,000 more valid signatures in his first submission. He said expects to have close to 100,000 valid signatures.

Couch worked with Arkansans for Compassionate Care on a proposed 2012 medical-marijuana measure that fell just short of approval by voters in that year's general election.

He and Fults later split over a "grow-your-own" provision, and they pursued separate proposals for this election year.

Under the proposed Arkansas Medical Cannabis Act, a patient with a "Hardship Cultivation Certificate" would be allowed to grow up to 10 cannabis plants -- five mature plants and five seedlings -- in an enclosed, locked facility. A caregiver would be allowed to cultivate the plants.

The hardship certificates would be provided by the Arkansas Department of Health "based on documentation of the Qualifying Patient's lack of access to a Nonprofit Cannabis Care Center," according to the proposal. Nonprofit centers would serve as dispensaries.

Fults said the measure is essential to ensure affordability, but Couch said it hurt the efforts to legalize medical marijuana in 2012.

"I understand, sentimentally, why she wants people to be able to grow their own medical marijuana, because some people won't be able to afford it," Couch said Friday. "Unfortunately, in the state of Arkansas right now, I don't think the majority of the people will support the grow-your-own."

Another difference between Couch's amendment and Fults' initiated act is the number and type of marijuana facilities allowed.

The Arkansas Medical Cannabis Act caps the number of Cannabis Care Centers, which must be nonprofits, at one-twentieth the number of pharmacies that have obtained a pharmacy permit from the state Board of Pharmacy and operate within the state. There are 794 in-state retail pharmacies, according to the board, so there would be about a 40-center limit.

If more centers -- which must be nonprofits -- are "necessary to provide convenient access to Usable Cannabis by Qualifying Patients in all parts of the state," the state Department of Health may issue more registration certificates under the proposed act.

The Arkansas Medical Marijuana Amendment would allow for intractable pain to be treated with marijuana. It is defined as "pain that has not responded to ordinary medications, treatment, or surgical measures for more than six (6) months," according to the amendment text. About 20 other qualifying conditions are also named in the text.

The Arkansas Medical Cannabis Act would allow the use of marijuana for those with intractable pain, which is "pain that has not responded to ordinary medications, treatment, or surgical measures for more than three (3) months," according to the act. About 55 other qualifying conditions are also named in the text.

Another possible proposal for the ballot would authorize up to three casinos in southwest and Northwest Arkansas. Additional signatures for that amendment were submitted Monday.

In addition to the medical marijuana act, another initiated proposal that has qualified for the ballot is a constitutional amendment to limit lawyer fees and noneconomic damages such as pain and suffering in lawsuits against medical care providers.

The Legislature also has proposed three amendments for the ballot:

• To amend the constitution to allow the governor to retain his powers and duties when out of the state.

• To increase the terms of county elected officials -- excluding justices of the peace -- to four years from two years; more clearly spell out what is an "infamous crime" for purposes of establishing the eligibility of someone to hold office; and eliminate the requirement that an election be held if only one candidate is on the ballot.