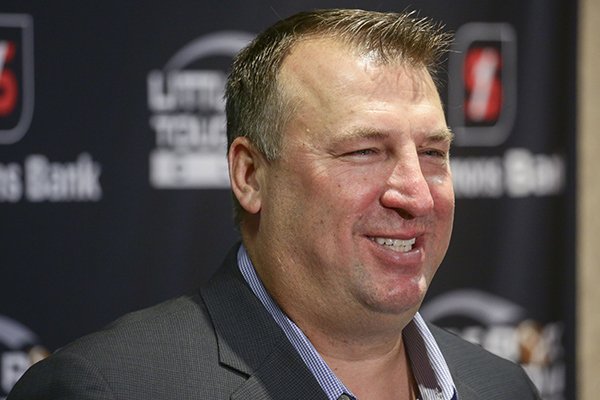 Arkansas coach Bret Bielema speaks to reporters prior to a meeting of the Little Rock Touchdown Club on Monday, Aug. 22, 2016, at Embassy Suites in Little Rock.

He's not running out of fresh material.

Bielema's one-liners, self-deprecating humor and jabs at programs such as Michigan and Alabama kept the crowd in stitches during his 30-minute talk and a question-and-answer session.

In fact, Arkansas' fourth-year football coach probably could carve out a career as a stand-up comic if he wasn't handsomely paid as a high-profile college football coach.

His humorous bits struck the right chords for the fans in attendance at what he touted as his final public talk before "the reality of football" hits with next week's season opener against Louisiana Tech.

Bielema, whose persona has taken on new dimensions with the release of his TV show Being Bret Bielema on ESPNU, gave an outsized performance at the luncheon.

Some of his best quips came in innocuous moments. In discussing this year's schedule, he brought up the Razorbacks' Week 2 game at TCU.

"As if the SEC West wasn't hard enough, our AD decided to schedule TCU," he said, borrowing a line he's dropped a few times before to lead in to the laugh line. "It's a great opportunity for us to play one of the best teams in college football over there. The neat thing is they're coming here next year, so it's home-and-home unless they Michigan us."

That's how the term "Michigan" became an action verb in Bielema's world, describing the act of pulling out of a scheduled two-year contract two years away from the first game.

Bielema wasn't finished with the Wolverines. He referenced his hiring of offensive line coach Kurt Anderson, an ex-Michigan player and graduate.

Bielema also had some fun at the expense of his wife, Jen, and former Arkansas coach Lou Holtz, the ex-ESPN college football analyst.

"My wife has a little crush on Lou Holtz," he said, explaining how Jen likes Holtz's laugh.

He then related a story about going to the ESPN campus to appear on its various shows about three years ago along with Jen, and they saw Holtz at ESPN headquarters in Bristol, Conn.

Then, adopting Holtz's accent, Bielema said, "And he said, 'Oh, you don't say.' Then he sent her an autographed picture."

Holtz was a bit of a hot topic Wednesday, as his son Skip Holtz is the fourth-year head coach at Louisiana Tech. Lou Holtz is being inducted into the UA Hall of Honor on the day before the Razorbacks face Louisiana Tech.

"I'm pretty sure [Jen] will be cheering for the Razorbacks that day, but you better check her if you see her," Bielema said.

His lighthearted jabs carried over to the Razorback Foundation after he said a few words about Skip Holtz.

"I don't know why they did this, but the Foundation decided to honor his father the day that we have him here as a coach, as a Hall of Fame inductee," Bielema said. "They'll probably have three buses of Holtzes here. I'm sure they're great people, but I don't need them."