By the playbook: Film about former Razorback Burlsworth scores with authenticity 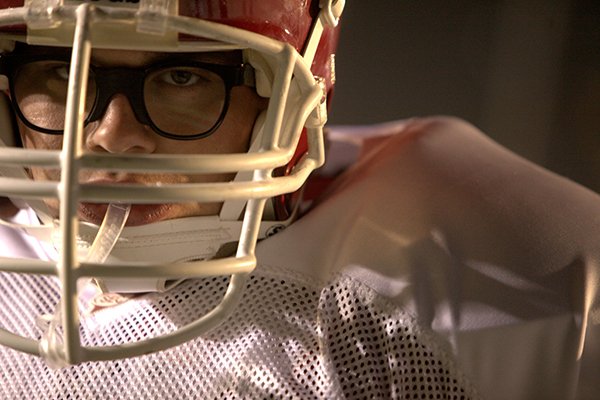 Greater tells the story of University of Arkansas standout Brandon Burlsworth, who is touted in the film's promotional materials as "the greatest walk-on in college football history." He may well have been.

After redshirting his first year, he not only won a scholarship but became the Razorbacks' starting right guard, and in his senior year, an All-American. He was drafted in the third round by the Indianapolis Colts. And had he lived, there's no reason to believe he wouldn't have started for the Colts his rookie year. He probably would have enjoyed a relatively long and lucrative career in the National Football League.

Rating: PG, for thematic elements, some language and smoking

ARCHIVES: Burlsworth at the center of one more Saturday

THEATERS: Where you can watch the film

By all accounts, Burlsworth was an unfailingly polite, possibly obsessive-compulsive young man possessed of remarkable character and dignity. He was a hard worker, the antithesis of the stereotype of the entitled star athlete. He was the first Razorback player to earn a master's degree (in business administration) before playing in his final game for the university. He had a deep and abiding Christian faith.

But in what would seem like a heavy-handed plot twist had it appeared in a young adult novel, Burlsworth died before he could play a single professional football game. Just 11 days after being drafted by the Colts, on April 28, 1999, a Wednesday afternoon, Burlsworth was returning to his hometown of Harrison after working out in the Razorbacks' facility in Fayetteville. Near Alpena, on a relatively flat stretch of U.S. 412, his car clipped an oncoming 18-wheeler, then swerved and crashed head-on into a second truck. He was on his way to take his mother to church.

If you live in Arkansas, you probably know all this. If you don't, you might be skeptical that anyone could be quite as earnest and decent as Burlsworth was. Maybe the unlikeliest thing about the film is how little truth it seems to change for dramatic purposes. While there is some compression of events and a brother (Grady Burlsworth) largely elided from the story, some of what seems Hollywooded up actually happened. Brandon's mother, Barbara (Leslie Easterbrook), really was in the habit of telling her son to watch out for "big ol' trucks" whenever he embarked on a journey. Brandon's teammates really did drive him crazy by messing with the pens he'd laid out just so on his desk.

What's most admirable about Greater is that, although it belongs to that class of films that is marketed (and sometimes dismissed) as "faith-based," is that it insists on a certain humanity for the lineman. As in life, this Burlsworth isn't perfect. We first meet him as a preteen (played by Ethan Waller), a junk-food loving football fan with no perceptible athletic talent -- a slow, soft fat kid. (In real life, Burlsworth was a late bloomer. He didn't develop into a star until his junior year at Harrison High. At the NFL combine in February 1999 he'd run 40 yards in 4.88 seconds, best among offensive linemen, and bench-pressed 225 pounds 28 times. And though he weighed 308 pounds and was just shy of 6 feet, 4 inches, he could dunk a basketball with two hands from a standing start. He wasn't without God-given talent.)

As a film, Greater shares with its subject a certain straight-down-the-middle conventionality. Fayetteville-based producer Brian Reindl, a first-time filmmaker who worked 11 years on this project, seemed determined not to make a mistake. Director David Hunt similarly plays it safe, and even cinematographer Gabe Mayhan -- who has demonstrated an extraordinary eye on other projects (including Josh Miller and Miles Miller's All the Birds Have Flown South) -- seems content to default to Hallmark Hall of Fame tastefulness. The football action scenes are especially well done. Lots of local faces pop up in small roles. The result is a fine, old-fashioned movie that hits all the expected beats and will no doubt be well received by people familiar with Burlsworth's story.

But it's not an adventurous film, and one might have hoped for a bit more nuance in the Brandon character (played as a young man with a certain appropriate stolidity by Louisiana actor Christopher Severio). Brandon's good and humble and perhaps a little too naive -- the only scene in the movie that feels false is his reaction to a few sips of alcohol his mischievous teammates slip him -- but not particularly interesting. He believes what his mama, his coaches and his pastor tell him. He doesn't need to see the big picture.

The filmmakers have enough sense to provide us with an alternate to this limited carrier of our empathy by framing the story through the eyes of Marty Burlsworth, Brandon's much older brother. Marty, played by veteran character actor Neal McDonough (probably best known for his portrayal of super-villain Damien Darhkin the DC Comics-derived series Arrow, Flash and Legends of Tomorrow, though he also had a memorable arc as a bad guy on the 2012 season of Justified), is a fairly complex figure who undergoes an understandable crisis of faith after the death of his younger brother. Forcing the events of the film through the prism of Marty gives the movie whatever dramatic tension it achieves. (While McDonough seems too old to play a character who, in the movie's earliest set scenes, is in his mid-to late-20s, he does some subtle work in what is by design not a terribly nuanced picture.)

In the film's biggest departure from verisimilitudinous story-telling, a tempter figure, The Farmer (played by Justified veteran Nick Searcy), is introduced to call Marty's attention to the random cruelty present in the universe. While it's not the most original trope, it's a lot of fun to watch these actors act.

In the end, Greater is not a movie for people who look to movies for something more than uplift or assurance, but that's all right. It does no disservice to the memory of a young man who died before he should have, and it's unlikely anyone will argue that it presents a false picture of Brandon Burlsworth. If it inspires people, especially young people, to do right and work hard, then it has accomplished more than a lot of more artfully conceived and daring movies.

Print Headline: By the playbook; Film about former Razorback Burlsworth scores with authenticity